The following article was written by Whitney Grace.  If you missed her previous installments of “The World of Muppet Crap,” click here to read about officially licensed Skeksis-inspired clothing, an incredibly obscure Muppet kangaroo, official Wilkins and Wontkins merchandise, and more.  Thanks for your dedication to weird Muppet stuff, Whitney!

Welcome to the Wonderful World of Muppet Crap! 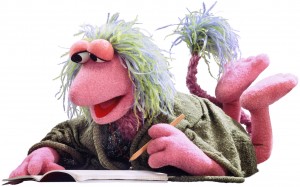 When I was a child, though many people argue that I’m still a juvenile, I used to watch Fraggle Rock reruns with my siblings and friends. Kids have this weird habit of picking a character when they watch a show and claiming that character as their own, but cartoons and other shows geared toward us kids had a significant lack of girl characters.   The girls that were on these shows usually fit two archetypes: the pretty one and the ugly one. There were different varieties of these archetypes: the pretty one that was either nice or stupid, while the ugly one was either fat, stupid, or brainy. When we watched Fraggle Rock reruns, Red and Mokey presented us with a conundrum. They were neither ugly nor beautiful, but had more facets than a Doozer stick construction. But there was one difference we could latch onto: Mokey was pink.

Red was super cool, but she wasn’t pink. My group of friends and siblings were part of the pink cult and we latched onto Mokey. Ensue the great Mokey battle of ’88. It was a horrible massacre. Many Barbies lost their articulated limbs, My Little Ponies were slaughtered to feed the troops, and many Pound Puppies were left orphaned. All of us wanted to be Mokey. We fought to be Mokey, but none of us won. I can proudly assert that six adults were needed to tear five squabbling girls apart. Little Connie Wesley still has my sister’s teeth marks on her arm.

The adults were so confused about why all of us were fighting about an imaginary concept. None of us could actually be Mokey Fraggle. They resolved the situation by saying all of us could be Mokey, but to quote Sarah from Labyrinth, “It’s not fair!” Since there was only one Mokey, only one of us could be Mokey. How could we all be the easy going Fraggle? The adults gave us an order and said it in a voice that said “No arguing, under penalty of spanking and no dessert.”

But I knew Mokey Fraggle was mine and so was Red Fraggle. No one else could be them! No one!

I’ve come to see the error of my ways — kind of — and I don’t incite arguments over such a petty detail about who can be a Fraggle. We can all be Fraggles!  I will argue, however, that there isn’t enough Mokey merchandise. If you know your Fraggle Rock history, you know that out of all the Fraggle Five she has traditionally been perceived as the least popular, though I can’t understand why. 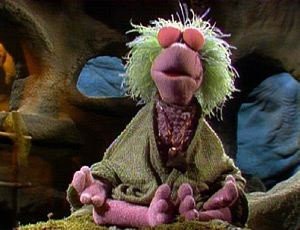 Mokey is an ethereal Fraggle with a connection to nature, but she exhibits a spitfire personality when needed. She doesn’t have a go-getter spirit, preferring instead to watch the world, read and write poetry, and appreciate the beauty in things. She acts as a mother figure to the Fraggle Five when necessary. She also has a bit of a temper when she’s pushed to her limits or gets extremely frustrated. Mokey, in short, is awesome and an excellent role model/character. Plus she’s pink. Did I mention that?

As I periodically check eBay and Etsy for Muppet stuff, I search for Fraggle Rock in hopes of picking up a rare, vintage item. Nothing has attracted my attention yet, but I have noticed there’s not a lot of Mokey stuff. There’s a lot Gobo and Red stuff, even Wembley and Boober spurred their own fall and spring collections. Even in fan-made merchandise, Mokey’s presence is diminished. It’s heartbreaking that one of the Fraggle Five is so underrepresented. When I think about it, the other Fraggles could have retired by now, living on the royalties from their licensed images, while Mokey is still publishing her poetry and stealing radishes from the Gorg’s garden to make a living.

What have I been able to track down when it comes to Mokey merchandise for those who want to start a collection?

One thing that pops up on eBay a lot are the Fraggle Rock McDonald’s Happy Meal toys from the 1980s. I remember having a couple of those around the house before my mother sold them in one of her garage sale sprees.   Mokey and the other Fraggles are in Fraggle versions of race cars. She’s driving an eggplant. Why would Mokey be driving an eggplant? She’s a radish girl! 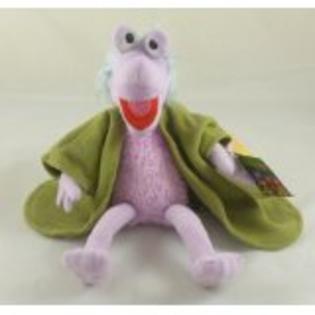 Then there is this stuffed toy from Tomy in the 1980s. It pops up frequently on eBay as well and has been creeping out children for years. This toy is a serious contender for the Tough Pigs Ugly Toy Pageant crown. It’s not just the one I provided a photo of, but nearly all the surviving Mokey dolls from the 1980s, that are scary. Mokey’s mouth is open in a silent scream, she’s suffering from Fraggle pattern baldness, and her crocheted sweater is a rag. I don’t even think Rags, Mokey’s lookalike doll and the Ragtime Queen, would even wear it.

There is a better toy that appeals to my discerning tastes: 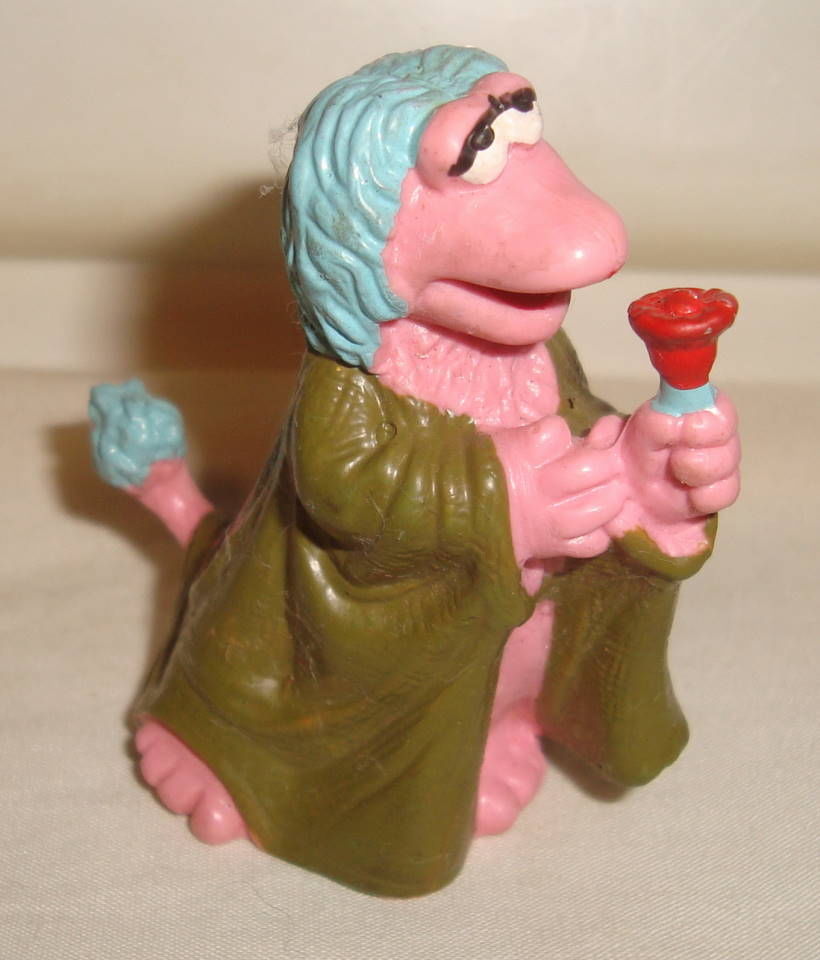 This PVC Mokey with a rose, apparently made in West Germany, isn’t bad. It doesn’t inspire me to make the purchase, though, without the other four Fraggles to complement her. Those tiny PVC characters need to be together in a group or they get lonely.

One of my favorite pieces of Fraggle merchandise is the Fraggle Rock soaps that came with original illustrations, a small theater, and little puppets: 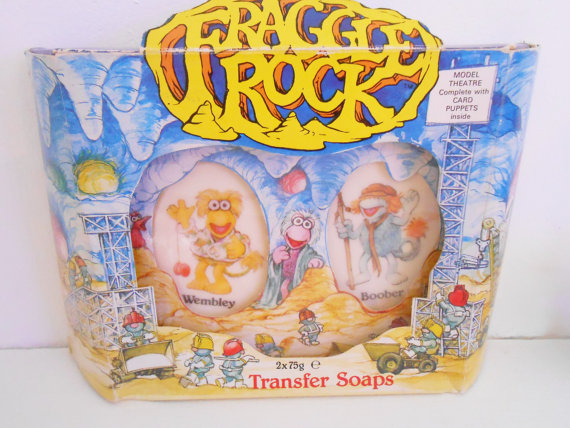 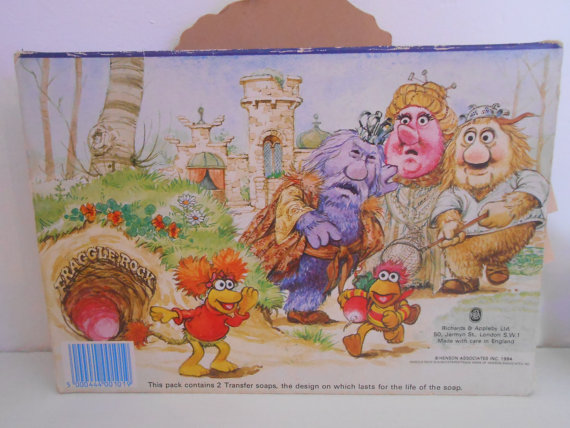 Many kids didn’t want to use the soap, because they feared watching their Fraggle friends melt away. Sadly, Mokey is only an illustration on the box, and was never able to teach kids about proper hygiene.

Those are the old collectibles. The new Fraggle stuff is limited as well. There’s this swanky Mokey costume that came out a few years ago:

You too can dress as if Mokey was made human-sized and decided to swallow you whole. At least they got the hair right… mostly. 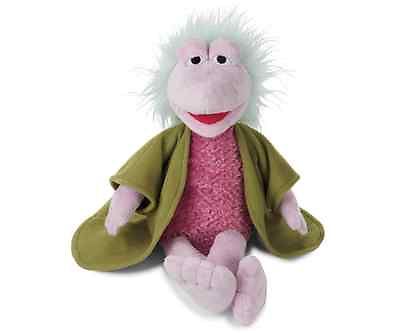 This doll was made when HIT Entertainment was releasing Fraggle Rock on DVD for the first time. At first, they made Red, Gobo, Boober, and Wembley as new dolls and released them in a set. Mokey, however, was left out and it was only due to fan intervention that she was eventually produced.  Too bad she looks like she’s stoned.  We got a new Mokey doll, but she’s taken liberties with Colorado’s new hash law or she was made in Amsterdam. 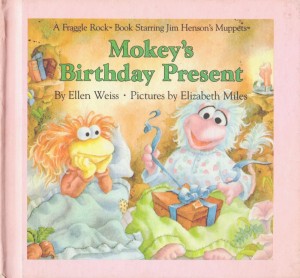 The good news for Mokey fans is that she was a prominent character in all of the Fraggle Rock books. A simple search on Amazon will show her proud placement on several of the covers.

It’s a hard knock life for Mokey toys. They’re either very limited, ugly, or been partaking of Mary Jane radishes. Maybe when The Jim Henson Company gets around to making the Fraggle Rock movie that has been put on hiatus, they’ll make some great merchandise with an entire line dedicated to Mokey.

While I’ll have to wait a long time to see that happen, at least I’ll always have Mokey’s appearance at Dragon-Con 2013. 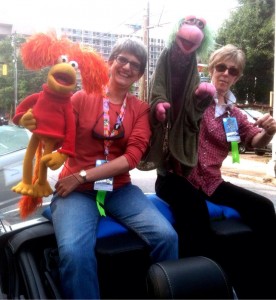 Click here to wear the same sweater every day on the Tough Pigs forum!