The Search for Constantine at EPCOT

The following article was written by ToughPigs reader Jeremy Wilcox, who is much closer to Orlando than us. Thanks for all your hard work, Jeremy! 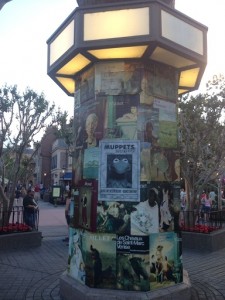 This weekend at Walt Disney World’s Epcot theme park a new Muppet-themed experience debuted.  Currently Epcot is hosting the International Flower and Garden festival, which includes a Kermit & Piggy topiary and some Muppet themed merchandise to coincide.  For those of you who are unfamiliar, Epcot has an entire section of the park dedicated to themed pavilions from around the world – Mexico, Norway, Germany, France, the UK, and so forth.  With the Muppets Most Wanted taking our felt friends on a world tour, isn’t this a perfect fit?

The experience, which technically doesn’t have a name, is actually two experiences in one!  One adventure (Team Sam) takes you to the UK and France pavilions, while the other (Team Napoleon) takes you to Germany and Italy before each experiences take you to the American Adventure for the finale. 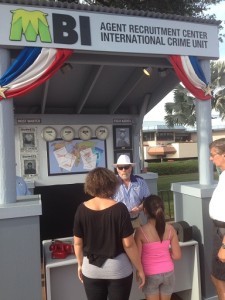 Let’s start with Team Napoleon, since this is Interpol jurisdiction.  I checked in at the Muppet Bureau of Investigation stand, which was nicely decorated for a temporary activity. (The festival only runs until May 18, but there’s no direct tie between the festival and the activity. That said, I don’t see this as a permanent installation.  No end date is announced so far.)  After the Cast Member (Disney’s term for employee) comments on my Kermit hat (I assure him it isn’t a Constantine hat), he hands us our mission portfolio and directs us to look for a valuable Cuckoo clock in Germany made by Baron Victor Von Cuckoo. 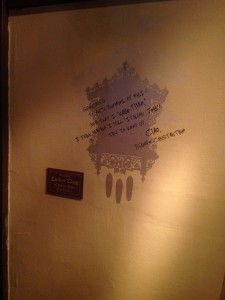 A stroll through Germany reveals a sign – a sure clue we’re on the right track!  We approach the shop only to find we’re too late!  A clear imprint of a clock on the wall is present, but Constantine has written a message:

“Greetings to arch enemies at MBI!  Now that I ‘Have Time’ I think maybe I pull ‘Italian Job.’  Try to keep up!” – Signore Constantine. 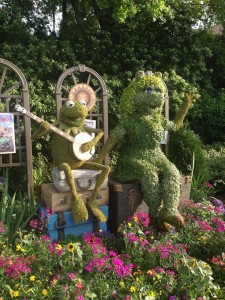 The Cast Member inside the store gives me our train ticket to Italy (in the form of a sticker – what kind of Mickey Mouse operation is this train that uses stickers for tickets?) and we’re off.  As we wander, we pass the Muppet topiary.  See, during the Flower and Garden festival Disney creates dozens of character topiaries from Mickey to Snow White and the 7 Dwarfs, to Kermit and Piggy!  These are particularly beautiful – and all made from living plants!  Disney’s set up a speaker system and was playing some Muppet music in the background – Movin’ Right Along gave way to Rainbow Connection and then surprisingly to Macho Man.  Really?  Macho Man?  That song hasn’t been commercially available since Muppet Hits Take 2 in 1994… whoever picks the music must be doing their homework!  While an odd choice at first, the festival includes a “Flower Power” concert series with 60’s and 70’s aritists including The Village People, so perhaps that explains the choice, but still – kudos!! 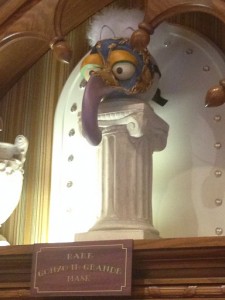 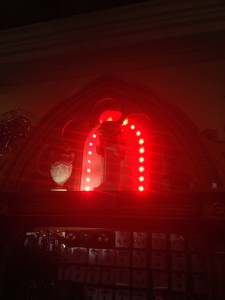 Back to our quest – we arrive in Italy, looking for a rare Gonzo il Grande Mask.  Fortunately enough there’s a mask shop in Italy!  WHAT ARE THE CHANCES?!  The Italian Cast Member instructs us to punch the number of the train we took (conveniently located on our sticker ticket) into a special key pad nearby, which activated the special effect for the mask – blinking red lights!  (I can just hear Jean Pierre Napoleon saying “Blinky light, let’s go!” but alas, it was only in my head).  We’re directed to visit America for our next stop – and as we exit the shop we see other evidence that Constantine is nearby, as shown by a subtly marked “Evil Criminal Mastermind Entrance.” 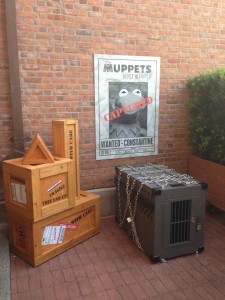 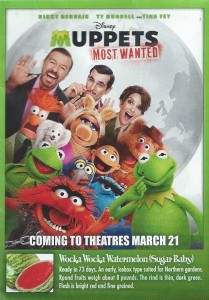 We arrive in America to meet another agent of the MBI, who tells us thanks to our hard work Constantine has been caught and we can see the evidence behind a plant-wall (Disney uses these to block off certain areas during construction, events, etc. rather than just using a real wall).  He also hands us our prize – “Wocka Wocka Watermelon Seeds” with the Muppets Most Wanted poster on them.  We go to take a look at Constantine for ourselves and discover some crates addressed to the MBI with a “Captured” poster of Constantine and a frog sized prisoner transport box.  I was really looking forward to hearing Constantine griping from inside the box “GET ME OUT OF HERE!” or something similar, but alas, it’s just a prop.  Missed opportunity. 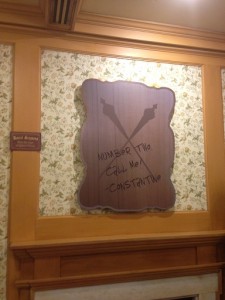 After a small stop for a snack (it was my lunch hour, which lasts 6 hours) we venture back to join team Sam for his quest.  Fun fact – within feet of the end of this Muppet Scavenger Hunt, you can buy a “Piggylicious Bacon Cupcake.”  We were dispatched to find the Royal Scepters in England – which of course, are already missing!  Constantine has left instructions for Number Two to call him.  We use the phone in England and hear a recording of Sam Eagle telling us he’d intercepted a call from Constantine to Number Two.  Sadly, the phone was awfully quiet and the shop was loud, so I really couldn’t make out the message – but it did sound like material that was recorded specifically for this purpose.The friendly British Cast Member tells us Constantine’s likely to take those to the jewelry show in Paris, and sends us on our way. 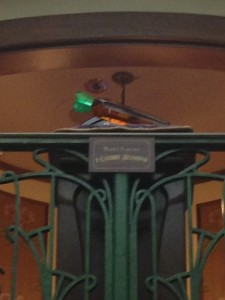 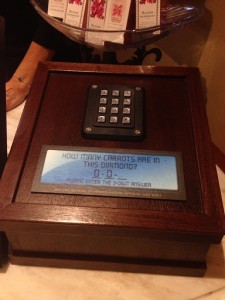 We arrive in France (we traveled by map) and find the jewelry show!  There’s a priceless 1 carat diamond on display (wait for it…) and when we find it, we’ll get our next clue!  We indeed find the one carat diamond (a cousin to the fabulous baseball diamond, I’m sure) which is, of course, shaped like a carrot (there it is!) and are instructed to enter information into a keypad again.  We do so, get some more blinky lights, and are sent back to America!

Given that both experiences have the same ending, we opted to move on with our day, content with knowing that we’d captured the world’s most dangerous frog and we could indeed sleep easy tonight.

So there you have it!  Constantine is no longer at large, and it’s all thanks to me (and the thousands of other MBI agents at Epcot that day).  This feels like a temporary activity – there is a permanent attraction in a similar vein themed to Phineas and Ferb (formerly themed to Kim Possible) which has some bigger sight gags and uses cell phone technology rather than stickers, but it’s a fun thing to do.  My wife and I saw a fair amount of other people participating in the hunt at the same time, which is always a good sign.  This is another great example of why the Muppets are a great fit for Disney – this is a fantastic use of synergy, and it says something about the considerable resources that Disney has to be able to install this (complete with blinky lights, custom recordings of Sam and Constantine, and keypads) for such a short duration.  Also, how many Kermit topiaries did you see when EM.TV owned the Muppets?  NONE.

So stop by Epcot’s World Showcase and capture Constantine yourself! 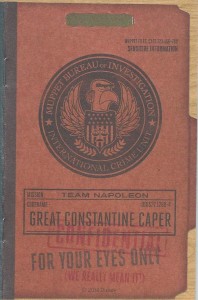 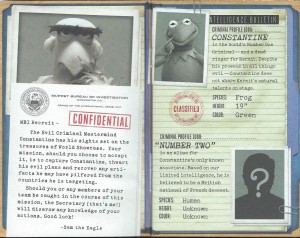 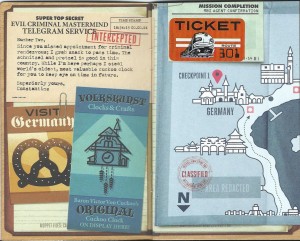 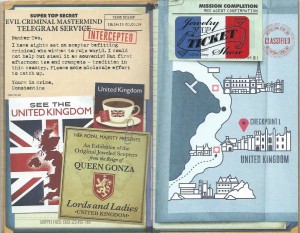 Bonus: Check out this video of the entire scavenger hunt!

Click here to find the mole hidden at the ToughPigs forum!

UPDATED: Muppets Most Wanted Is a Hit at D23

Muppets Most Wanted: The Lost Commentary

At PizzeRizzo, Nobody Out-Pizzas the Rat