Jarrod Fairclough Presents: The Ramblings of a Muppet Nerd

I am a heterosexual male. I love the ladies. I’ve kissed over 2 girls!

But I am in love. With a man. So, please indulge me, as I write a Muppet fans love letter to Marshall Erikson himself, Jason Segel…

Dear Jason,
We’ve never met, and you may never read this, but my name is Jarrod Fairclough, and you have been a big part of my life for three years now. In 2008, I first saw you when I watched Knocked Up. And, to be honest with you, that could have been my last exposure to you. Because of my immense dislike for anything with Katherine Heigl in it, the film was tainted and left a bad taste in my mouth.

And then, in 2008, Forgetting Sarah Marshall was released, and I, for about two months, had every customer (I work in a grocery store) come up to me and say “You know, you look like the main guy from Forgetting Sarah Marshall.” How I Met Your Mother had been around for a few years, but it didn’t really get known in Australia until Sarah Marshall. I thought to myself, “Maybe I need to check this movie out,” but I never got around to it.

Then, it was made known to me that you were writing a new Muppet movie. Firstly, I did what most Muppet fans would have done, and thought “Yeah, I’ll believe it when I see it.” And then it started getting more and more prominent in the Muppet world. And I thought, “Okay, maybe I need to check this Segel guy out.” So I went and borrowed a friend’s copy of Forgetting Sarah Marshall. Then, it happened. For the first time in years, I had a belly ache from laughing in a movie so much. People ask me my favourite movie, and I say that it’s a tie between The Muppet Movie and that piece of comedy brilliance.

The film was so good that I took a chance, without seeing a single episode, I went and bought the first four seasons of How I Met Your Mother on DVD, purely based on the fact that you were in it. I was finished those four seasons in five days (I wasn’t studying then). Still now, every week, I watch at least 5–10 episodes from the 6.3 seasons that have aired so far (I’m downloading Season 7 as it airs in America–we won’t get it here for another 4-5 weeks).

The point being, Mr. Segel, is that I was so confident you could make me laugh, that I spent over $100 I probably couldn’t afford at that time of my life (long story involving copious amounts of cereal, SpongeBob, and The View–which shows you how dark that time was). And it was totally worth it.

And that brings me to The Muppets. You lucky Americans only have another month to wait for this movie. I have another six weeks on top of that. January 1st I will be sitting in the cinema, on my own (I don’t want non-lovers to taint my experience) where I will see the movie, and regardless of if I liked it or I loved it, I will be leaving my seat, going to the box office, and buying another ticket for the next session. I may even go enough times to spend $100 in one day, because I trust you that much. I can’t explain how excited I am that you’re writing and starring in this film, Mr. Segel. Jason Segel and Muppets together? That’s like Jim Henson and God got together and said “Happy New Year, Jarrod.” I have friends that aren’t Muppet lovers, who have suddenly become intrigued in the movie when I mention you’re involved. The other day, I went to see a movie, and for the first time since 1996, I saw Muppets on a big screen when the trailer was played. I seriously cannot explain how excited I became. I had a huge grin on my face the entire time, even though I’ve seen the trailer 50 times before.

Jason Segel, you are incredible. I saw Gulliver’s Travels because you were in it (and Emily Blunt–she’s a spunk). Every other day, if not every day, I have some sort of reminder of how funny you are, which gives me the confidence to say that The Muppets is going to be one of the best films I will ever watch. And I’ve seen Mac and Me.

Sincerely, Jarrod Fairclough
AKA, the guy who rings you every night and just breathes down the phone (I’m not creepy, I just have bad asthma)

Thanks folks. That got a bit weird in places, but I had to say it. Join me next time for the MOJA – Museum of Jarrod Art, where I go through some Muppet drawings I’ve done over the last year or so, with special comments by a good friend to me, and to Muppets, Sesame Street artist Joe Mathieu.

Do you think we should have rented a bigger car?
Jarrod.
P.S – Remember many many months ago I wrote that my sister was expecting her first child? Well, little Sienna arrived safe and sound 14 weeks ago (at time of writing) and she’s the cutest thing on two legs. 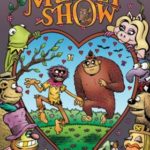