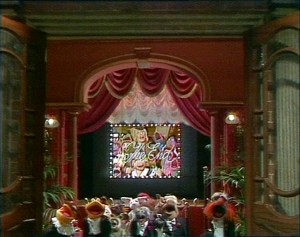 When a major studio is preparing to release a major motion picture, they screen it for preview audiences first.  Preview screenings can be crucial for determining how a movie plays for a crowd of actual movie-goers, which aspects of the film work and which don’t, and whether anyone actually thinks “fart shoes” is funny.  This past Thursday night, a preview screening of The Muppets was held in Long Beach, California, and we’ve heard from two Muppet fans who were lucky enough to be there.

Here’s what Tough Pigs reader Jesse Letourneau had to say (No spoilers about the story here, just some thoughts on the themes):

There are original songs.  There are a ton of cameos (I know — big surprise), and many of them go by so quickly that the old cliché of “blink and you might miss them” actually applies.   The puppets look great.  The performances are wonderful.  And Walter absolutely belongs to this world.

And now for the big question:  “Was it any good?”   Yes, yes it was.  It was all kinds of good.  Will it bring throngs of new fans into the theatres for years to come?  Will it spawn television shows, guest appearances on late night television, and scores of lunch boxes, backpacks, and watches adorned with singing frogs and dancing bears?  That I don’t know.

I can tell you it was definitely aimed at the adult fan.  This film isn’t as much an introduction of the characters to new fans as much as it is an exercise in asking us older folks, “Remember them?”   The film’s central question — Can we go back to the way things were, or is it time to move on and grow up? — is  a question often echoed by those in their 20s and 30s, those old enough to have childhood memories of the Muppets.  Using the Muppets as the cultural icon to ask this question in allegoric form works quite well.

We’ve also heard from Tough Pigs reader Chris, who reports, “It was a screening where you would fill out a comment card afterward. There wasn’t a single person that didn’t fill out the movie as ‘Excellent’ or ‘Very Good.’ The audience loved it… Just about all the jokes were laughed at.”  Chris also tells us that (MINOR SPOILER!!!) Thog, sadly, doesn’t have any lines… but Behemoth does.  I didn’t see that coming!

While it’s great to hear that everyone present enjoyed the movie, it’s impossible to know what kind of people were in that theater.  What half the audience members wrote on their comment cards that the movie would be better if Kermit were replaced by a cheeseburger?  Some people really love cheeseburgers.

There’s still enough time to make changes to the movie between now and November 23, so there’s every possibility there will be more of these screenings.  Maybe one will come to your town!

Click here to do jazz hands of jealousy on the  Tough Pigs forum!