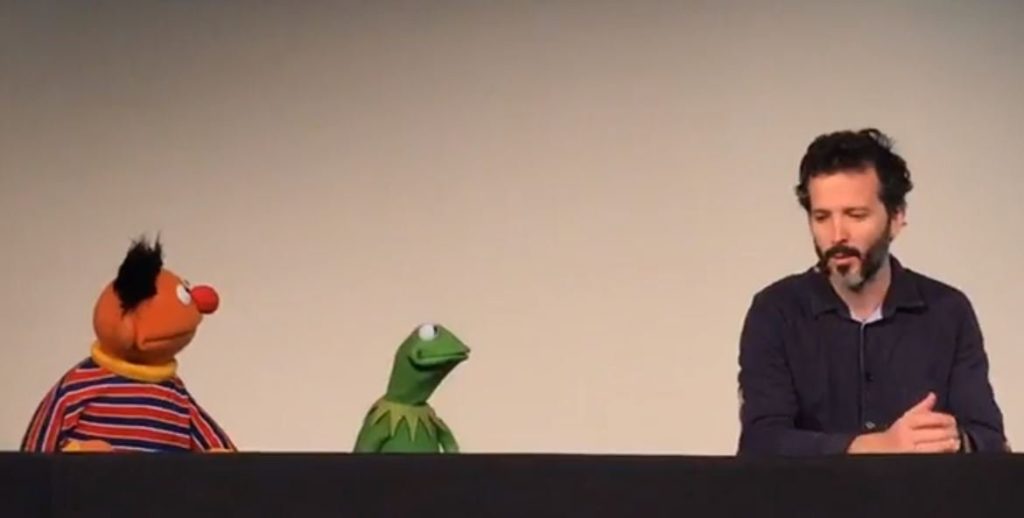 Did everyone see the clip from the ongoing Jim Henson Retrospectacle in New Zealand, in which Bret McKenzie interviews Kermit the Frog and Ernie… together? At the SAME TIME? If you haven’t, you need to. Try this link to a Facebook video. 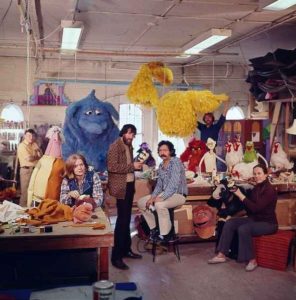 The Muppet Workshop, filled with puppets that are not alive — but will be when they reach our TVs!

Obviously, Ernie and Kermit appearing on a live panel and interacting with each other is unprecedented. It couldn’t have happened during the years in which both characters were performed by the same puppeteer (first Jim Henson, then Steve Whitmire, for those of you with fuzzy memories).  And in the interview, Kermit (now performed by Matt Vogel) and Ernie (now performed by Peter Linz) are both funny, charming, and pretty consistently in character. For a Muppet fan, it’s quite remarkable.

That’s not what everyone took away from it, though. In the past couple days, I’ve seen this article from Radio New Zealand News linked in various places. The title is “Never meet your heroes — the Muppets edition.” It’s a tongue-in-cheek headline, I know, but I think the author, Katie Scotcher, may have genuinely failed to fully appreciate what she was witnessing.

Scotcher talks about being present for the panel as a member of the media and preparing to set up her audio recorder before the event started. “I walked up to the table as instructed, and to my horror Ernie and Kermit were there – under the table, laying face down” she says. “I’ve always known they were puppets, but seeing them under a table made me feel as if I’d stumbled upon a crime scene.”

I’ve seen this kind of reaction before. We’ve even talked about it a bit on this very website. Sometimes, when a member of the general population sees a behind-the-scenes photo or catches a glimpse of an inanimate puppet, they react with shock, and often denial. I guess it doesn’t happen when people see Muppets in museums, so there must be something about a completely unconscious Muppet that especially throws people off. Folks like seeing Muppets talking, dancing, and generally being mobile, so they’re apt to be startled by evidence that Muppets are often immobile.

Later in the article, Scotcher talks about the moment when she had the opportunity to interview Bert and Ernie. Many Muppet fans would dream of being in the situation, right? In fact, I would bet five bucks and my Muppet Show lunch box that a number of fans have literally (and I mean literally-literally, not the new definition of literally where it means nothing) gone to sleep and had dreams about interviewing Muppets. But after briefly marveling about the physical logistics of the interview (three puppeteers on dollies with their arms sticking up!), she complains that she didn’t get to ask all her questions. Hey! You just got to be in the same room with the stars of Sesame Street! It’s pretty cool that you got to ask them any questions at all! On TV, they never answer you at all, no matter how many questions you ask! At least in my experience. 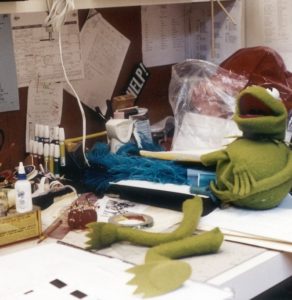 Kermit doesn’t have legs, but he’s okay. It doesn’t hurt. Because he’s a puppet.

I know, I know — the whole Radio New Zealand article is presented with a little bit of a wink, so I shouldn’t be picking it apart. And I wouldn’t have, if Scotcher hadn’t ended with the old “my childhood was ruined” line. Come on, people! Your childhood shouldn’t be ruined by the realization that Muppets are puppets. It should be enhanced by that realization. Why did it never occur to you when you were watching Sesame Street as a kid that the Muppets were lifeless puppets brought to life by puppeteers? Because they’re so good at it! Instead of grumbling because Bert and Ernie aren’t real, why not be amazed because they are real — thanks to the efforts of people like Frank Oz, Jim Henson, Steve Whitmire, Eric Jacobson, and Peter Linz.

We like to think of the Muppets as living, breathing beings, and there’s a level of reality not so far from our own in which they are. But need it be a devastating blow to discover that the characters we’re watching are merely scraps of fabric and fleece, merely inanimate objects — exquisitely-crafted objects, but objects just the same — incapable of entertaining or educating or displaying any sign of life at all without the presence of a skilled practitioner of the noble art of puppetry? And indeed, in the words of Orson Welles on his failed talk show pilot, without performers, the Muppets are just a “SQUEAKING BOX OF DOLLS!” Isn’t it impressive that the Muppet performers can turn a squeaking box of dolls into a beloved family of characters?

I’m probably expecting too much of the average non-nerd. I’m living in the famous Muppet Fan Bubble, after all. But I’m really curious to hear from more people. So to every Muppet fan reading this: Ask your friends and family how they feel about the Muppets as puppets. Would they be traumatized to see a Muppet without a hand in it, or would they be fascinated? And let me know what they say, by writing to Ryan@ToughPigs.com, or commenting on Facebook or on the Tough Pigs forum!

And then maybe together, we can teach them what we know. I just hate to think of all these delicate childhoods being ruined.

Click here to lie under a table, face down on the Tough Pigs forum!