The D23 Expo, Disney’s giant self-promotion party, is under way in California RIGHT NOW, and by all accounts, it’s knocking fans’ socks off.  Already the Imagineers have teased future developments for the theme parks, Dick Van Dyke has performed, and Minnie Mouse has announced her intention to run for president in 2012.

But what we really care about is, Are there Muppets?  And the answer is: Yep!  Friday evening’s festivities included the Disney Legends ceremony, in which Jim Henson was among a handful of famous people who were honored for being really awesome. A few pictures and even video have popped up online so far (most of them from Disney’s official D23 Twitter account), and it looks like it was a fitting tribute.  (You can click on all these pictures to make them bigger.)

Brian Henson spoke, as did his sister Lisa: 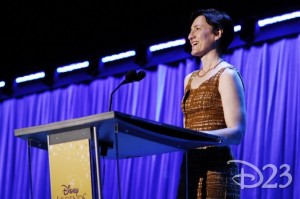 At some point, Brian and Leslie Carrara-Rudolph performed the classic “I’ve Grown Accustomed to Your Face” bit from the Muppets’ early days (which is a staple of Stuffed and Unstrung shows). Here’s a video posted by YouTube user AllEarsNet:

It’s remarkable how funny that thing is after almost 60 years.

And then, to close things out, and to make everyone in the audience cry, Kermit and Rowlf (two characters originated by Jim!) took the stage to sing “The Rainbow Connection.”  Here’s a picture of it from Disney’s Twitter: 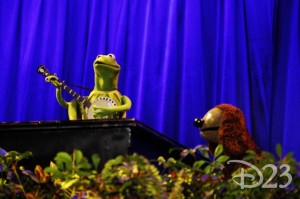 And here’s what it looked like from the audience: 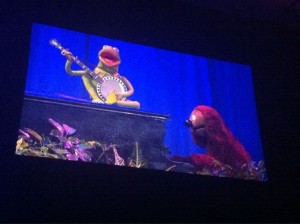 And… oh yeah!  Here’s a video of it (also posted by YouTube user AllEarsNet.)

Here’s another video, as seen from the audience. You can sing along… just follow the bouncing Bunsen head!

Everyone up to and including emcee Tom Bergeron seemed pretty happy to have experienced it. 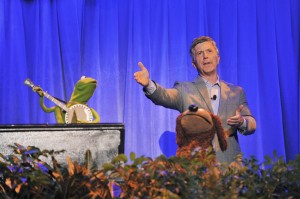 Brian, Lisa, and even Disneyland-walk-around-costume Sweetums were all smiles. 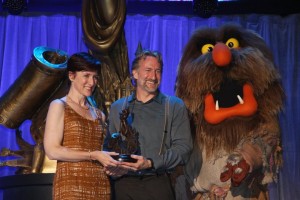 I don’t know if this is from before or after the ceremony, but at about the 1:10 mark in this video, Kermit briefly says a few words about Jim. 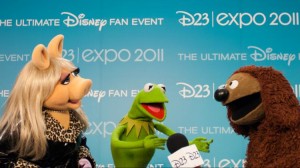 And there you have it.  Keep an eye on this space for the latest updates on D23 goings-on!  And if you’re at D23, please send us any photos of Muppets you may have taken.  (And please know that we are incredibly envious of you.)

Click here to play a banjo while sitting on a piano on the Tough Pigs forum!

UPDATED: Muppets Most Wanted Is a Hit at D23