Admit it—at some point, you’ve wished Doozer sticks were real so you could eat them. No? Just me? Either way, shouldn’t someone figure out how to make them in real life? And that, friends, is my favorite kind of ToughPigs article: someone dives deep into investigating some obscure Muppet-related question that literally no one else was asking.

In episode 119, “The Great Radish Famine,” we learn that Doozer sticks are made thusly:

The ’84 picture book What Do Doozers Do? hardly gets more specific: “Treadmill Doozer sends the radish dust down to the factory, where it is molded into Doozer sticks.”

But I am here to tell you that ground-up radishes are very wet. There is no way that blitzed radishes alone, molded together and somehow dried, would end up as a clear, hard, crunchy substance strong enough to build with. So I set about figuring out how to dehydrate radishes to make that finely-ground radish powder as a flavoring agent in a clear hard candy, which is what Doozer sticks most remind me of. Here is my step-by-step guide of what (not) to do.

Wait a minute! Pink goo?? In Doozer sticks?? Yes, folks, I made this attempt on 1/9/22, before I saw the reboot Back to the Rock, wherein pink goo in Doozer sticks ends up being a major plot line through the season. I accidentally predicted the future.

Too make the actual candy, I followed this candy ice recipe from Nerdy Mamma:

Lessons learned from this attempt:

P.S. Here it is, my first Doozer construction made with real-life edible Doozer sticks. Eat your heart out, Frank Lloyd Wright.

Click here to taste test on the ToughPigs forum!

An Ode to the Fraggle Rock Happy Meal Toys 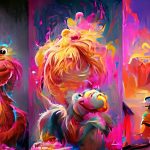