The Dark Crystal vs. Entertainment

The Dark Crystal: Bold, visionary work of creative genius, or a bleak, slow-moving mess? This question has plagued us for a generation. In a conflict as controversial as this one, it’s difficult to find common ground.

On behalf of the Tough Pigs Foundation, and its continuing charitable efforts to restore the human spirit, I have volunteered to step in and objectively determine the Entertainment Value (EV) of The Dark Crystal. As a control, I’m going to compare the film with its 1991 remake, Thelma and Louise.

Wait a minute. You didn’t know that Thelma and Louise was a remake of The Dark Crystal? I thought it was obvious. Think about it. Both movies are about two people leaving home to battle an oppressive, authoritarian regime. The protagonists travel across the country together, fending off attackers and picking up a cute sidekick along the way. At the end, they bravely face off against their oppressors. The only difference is that in The Dark Crystal, the cute sidekick is a little growling fuzzball, and in Thelma and Louise, it’s Brad Pitt.

A comparison between the two films is instructive in determining their Entertainment Value. What follows are the Foundation’s findings, based on a close examination of the works in question.

The Dark Crystal: A flat landscape, with a path, mountains and clouds.

Thelma and Louise: A flat landscape, with a road, mountains and clouds.

Lines of dialogue in the first six and a half minutes:

The Dark Crystal: “Today, Jen’s pipe gives no comfort. For today, his master lies dying, and a journey must begin. The Journey… of Jen.”

Thelma and Louise: “I’ve had it up to my ASS with sedate!”

Thelma and Louise: Thelma is almost raped in a parking lot. Louise rescues her. The rapist sneers, “Suck my cock,” and Louise shoots him in the chest.

The Dark Crystal: “Now I’ve got the shard. But what do I DO with it? What IS it? Am I supposed to TAKE it somewhere?”

Yes, it really is the same movie:

In The Dark Crystal, the Chamberlain Skeksis is cast out of the Castle, and saves the Gelflings from the big crab monsters. He tells Jen and Kira that he wants to bring them to the Skekses in peace. In Thelma and Louise, police investigator Harvey Keitel saves the fugitives from being shot. He tries to talk Louise into giving herself up.

In The Dark Crystal, the police tap Thelma’s husband’s phone to find out where Thelma is. In Thelma and Louise, the Skekses get a vision through the Crystal that tells them where the Gelflings are. Oh wait, it’s the other way around.

The Dark Crystal: A room full of Podlings prance about.

Thelma and Louise: Thelma and Brad Pitt have vigorous, sweaty sex in a motel room.

A shrieking Skeksis: “By the Law — he must PAY!”

Thelma and Louise kill a rapist, blow up an evil trucker’s rig, rob a convenience store and trash a hotel room.

Jen and Kira are indirectly responsible for the complete destruction of Augra’s workshop and an entire Podling village. They also ride two Landstriders straight into danger, and the Landstriders are immediately killed. Kira kills a Skeksis, which also destroys a Mystic. Every single creature that comes into contact with Jen and Kira throughout the entire movie is either eaten, crushed, enslaved or blown to bits, and every trace of civilization we see is wiped away.

Who would you want with you when jumping over a cliff?

Thelma and Louise: It’s more of an issue.

Let’s call this one a draw.

The Dark Crystal is thirty minutes shorter than Thelma and Louise — but watching them back to back, it feels like it’s six hours longer. Watching The Dark Crystal made 92 minutes feel like the longest afternoon of my life. The dialogue — when there is any — is repetitive and pretentious. The characters are so thin they blow away. It has no sense of humor and little sense of drama.

Not to mention that the entire plot — when there is any — is driven by a pointless, self-fulfilling prophecy. The big glowing guys make a bunch of prophecies, and then break the crystal. Bad stuff happens for a thousand years. One of the prophecies is about a Gelfling destroying the Skekses, so the Skekses hunt down and kill every single Gelfling in the world. Jen is finally called by the prophecy to come and repair the crystal, and everything goes back to the way it was a thousand years ago. The big glowing guys re-appear, saying, Oops! Let’s not do THAT again.

On the other hand, Thelma and Louise is a terrific piece of entertainment: funny, heartbreaking and inspiring. The dialogue is incredibly tight and sharp, and the plot takes you on an emotional roller-coaster. Watching it now, even knowing what’s going to happen, it’s still better than I remember it. Plus, it’s got Brad Pitt jumping up and down on a bed with his shirt off.

Dark Crystal fans — if there are any — heed my prophecy. Put down The Hobbit and come out with your hands up.

If you really, honestly enjoy watching The Dark Crystal — that’s a warning sign that maybe you should take a break from movies for a while. Go outside and get some fresh air. Then try something easy, like a music video. Work your way back up from there. 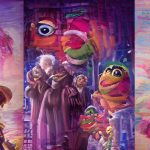