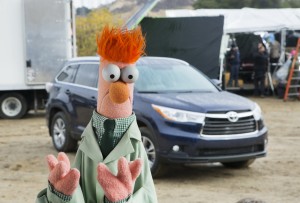 The Super Bowl (am I allowed to use that phrase without the express written consent of the NFL?) is just a few weeks away.  I’ve heard rumors that some people watch it because of the football game, which is just adorable, but I’m pretty sure the majority of viewers tune in just for the halftime show and the commercials.  Super Bowl commercials are huge, which is why we’re now apparently at the point that companies are posting teaser trailers for them online.  Can you imagine?  A trailer for a commercial?  Welcome to the 21st century!

Anyway, USA Today has posted a teaser for a new Toyota commercial with the following synopsis: “Toyota’s Super Bowl ad features actor Terry Crews picking up the Muppets in his Toyota Highlander after their bus breaks down.” Check it out (WARNING: Don’t expect to see many Muppets):

So now you have a reason to watch the Super Bowl: The glorious return of the Electric Mayhem bus! And of course, an answer to the age-old question: How many Muppets can fit in a Toyota Highlander?

UPDATE: The folks at Stitch Kingdom got their hands on some hi-res photos and some more info about the commercial, including the title of the spot — “Joyride” — and the fact that there will be a new song. There’s also this:

In addition to the commercial, the Muppets gang will provide real-time updates as they travel to the big game in their Toyota Highlander on February 2. Fans and customers are invited to chat live with the Muppets on game day by tweeting @Toyota or using #NoRoomForBoring.

Stitch Kingdom has also posted this terrific raw footage of Toyota Highlander-centric interviews with Kermit and Gonzo. It’s eight minutes long, but it’s totally worth watching for lots of nifty off-the-cuff moments of Muppet performers riffing and figuring out how to answer the interviewers’ questions without saying the phrase “Super Bowl”:

Wow. A new Muppet thing, with a celebrity and a new song, behind-the-scenes footage, AND live tweeting.  You know what? Muppets Most Wanted isn’t even necessary anymore. This Toyota commercial is all we need! 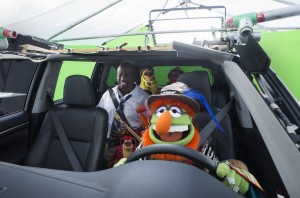 Click here to hitch a ride with Terry Crews to the Tough Pigs forum!