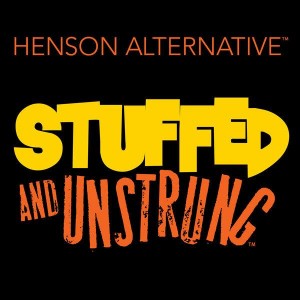 Henson Alternative’s new puppet improv show Stuffed and Unstrung is currently running at the Union Square Theater in New York City through May 29. It’s sort of a new-and-improved version of the Puppet Up! shows they’ve been doing for a few years in Los Angeles and at various comedy festivals around the world.

Before I saw the show, my knowledge of the Puppet Up concept was limited to what I had seen in the Puppet Up Uncensored TV special on TBS a few years back, and the video clips on TBS.com that followed soon after. Based on that evidence, I was not expecting to laugh much at Stuffed and Unstrung. I was even prepared to use the headline STUFFED AND UNFUNNY for my review. (Yes, Oscar Wilde himself would be blown away by my razor-sharp wit.)

And then I saw the show. A prerecorded introductory message with Samson and Bobby from Tinseltown didn’t do much to raise my confidence level, but then the puppeteers came out, grabbed their goats and cavemen and aliens and talking hot dogs, and started doing their thing… and to my very pleasant surprise, I laughed a lot. I think I may have done some chuckling, giggling and snorting, too. As it turns out, Stuffed and Unstrung is quite an entertaining show. 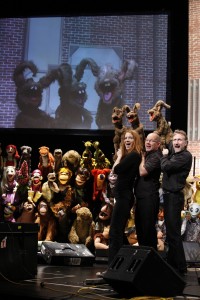 I’m sure a lot of that has to do with the fact that the performers have had a few years and more than a few shows to hone their craft. But there’s another element at work that’s even more important, a fact that struck me time and again while watching the show: A puppet improv comedy show is a million times funnier live onstage than it could ever be on a TV or a little window on your computer.

As they say, when you see Stuffed and Unstrung, you’re getting “two shows at once.” A camera captures the puppets’ antics and they’re projected onto screens, which just looks like a puppet show. But there are also the puppeteers themselves, and watching them making faces and running all over the stage and grasping for punchlines — an aspect of the show almost completely absent from the video clips — is at least as much fun as the puppet skits themselves.

Which is not to say that every skit is a winner. Some audience-shouted suggestions just don’t lend themselves to instant comedy, and the nature of improv is such that it’s impossible to whip up a well-developed skit with good jokes every time.* Host Patrick Bristow keeps things moving and has a good rapport with the audience, although I sometimes questioned his decisions to accept certain audience suggestions. A 1950s manners film about… farting? A lecture about… masturbation? Seriously? I realize the show is for adults only (and it really, truly is uncensored), but the dumbest, crudest suggestions are not always the best ones. And yet, even the weaker skits were enhanced by the ability to glance back and forth between the screens and the stage, to watch the puppeteers’ faces as they attempt to wring comedy out of setups like “itemizing taxes in Alaska.”

*(Another issue I had with the TBS Puppet Up special was that, while you would expect the producers to select the very best skits available for inclusion in the show, most of them fell flat. Tough Pigs’ Joe Hennes and I happened to speak to one of the puppeteers after the Unstrung show, who told us that there was an audio problem with the recording of that special, which rendered unusable about half of the skits they shot. That explains a lot.) 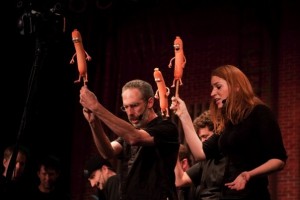 Most of the show consists of improv games like you would see at any neighborhood improv theater, but there are a number of elements which I believe are new to the Stuffed and Unstrung revamp. There’s some motion-capture puppetry, which I would have liked to see more of. There’s an innovative bit with an energetic Brian Henson playing a dancing puppet and his identical brothers, a bit I couldn’t possibly explain even if I wanted to. And there are two reenactments of classic Muppet variety show sketches. I wasn’t sure how to feel about those at first, but you know, they were done respectfully and with full credit given to the puppeteers who originated them, so it ends up being a nice tribute.

From what I hear, puppeteers will rotate in and out of the cast over the course of its run. I’ve actually had the opportunity to see the show twice now, and the cast lineups I saw included a few veteran Henson puppeteers (Brian Henson, Julianne Buescher, Tyler Bunch, and Leslie Carrara-Rudolph), as well as a few I was unfamiliar with (Ted Michaels, Colleen Smith, and Michael Oosterom). Every one of them had some inspired moments, with Smith and Bunch standing out for their ability to maintain a scene’s momentum while keeping it on-topic. 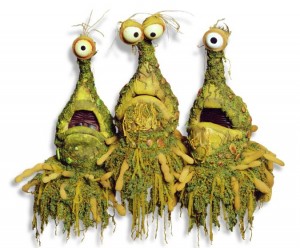 I could keep going here and get into the really geeky stuff, like which of the puppets I recognized from which Henson projects (Raisin from The Secret Life of Toys! Waffle from Animal Jam!), but I won’t. So here’s the thing: If you’re a regular reader of Tough Pigs, you may have noticed that we have not exactly been thrilled by the bulk of the Henson Alternative projects thus far, but Stuffed and Unstrung is the best thing they’ve ever done under that banner. Perhaps if the NYC run is successful, they’ll do a national tour, so folks in Portland and Cleveland and Goat’s Elbow, Missouri can see the show. Because — and maybe I’m flogging a dead hot dog here, but it’s true — live and in person is really the only way to see naughty puppets.

Here’s a promo video featuring Joe Hennes and myself with two cast members from the show.

Click here to drunkenly shout out crude suggestions on the Tough Pigs forum!