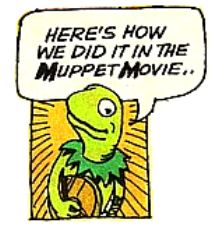 The Unexpected Dangers of Running a Website, Part 4: I used to collect Muppet memorabilia that I actually liked. Ah, I remember those days, back when I actually chose not to purchase an item because it was ugly, badly made or designed by crazy people. How far away that seems now!

Because, of course, now I have this website to feed, with loyal readers tugging at my sleeve every five seconds like so many hungry Oliver Twists. So now finding a copy of Adventures of Big Boy #265, a fast-food giveaway comic book featuring a badly rendered visit with Jim Henson… well, it’s just like heaven to me.

I found this on Ebay recently, and my eyes just lit up. You should’ve been there. I will pay any amount of money for that, I whispered to myself. Luckily, it was only ten bucks.

So here, loyal readers, is the true story of the day when a fictional chain-restaurant spokesman traveled to London to interview a real puppeteer, with a stopover in a fictional New York street to pick up another fictional character. If that makes sense. 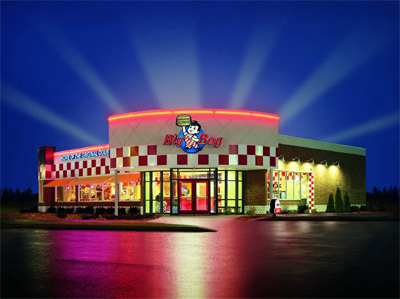 Adventures of Big Boy was a 16-page comic book, printed on cheap-ass newsprint as a giveaway at Big Boy Restaurants. Big Boy Restaurants, in case you don’t know, is a chain known worldwide (aka the US and Japan) as “The Home of the Big Boy,” a double-decker hamburger. Don’t laugh; they’ve got 455 restaurants, and they could squash you like a bug. Since this is issue #265, I have to assume that this was a weekly or biweekly deal — which explains at least some of the weirdness you’re about to see. It was published in May 1979, a month before The Muppet Movie’s release.

The cover lists a price of 25 cents, but right under that it says “FREE to guests of Kip’s Big Boy Family Restaurants.” Since the Big Boy restaurants were the only places you could possibly pick up one of these, I can’t imagine what the “25 cents” is there for. Maybe that’s the street value.

Obviously, the fun of all this is for you to find all the assorted weirdness in this comic yourself, but forgive me for pointing out a couple things. To start with, the cover depicts Jim Henson sitting on a crate by a dock on the Thames River, as indicated by the “Thames River” sign wedged under Henson’s foot. That’s such a helpful sign; it’s a shame it fell into the water like that. Once it floats away, nobody in London will remember what the river’s called. 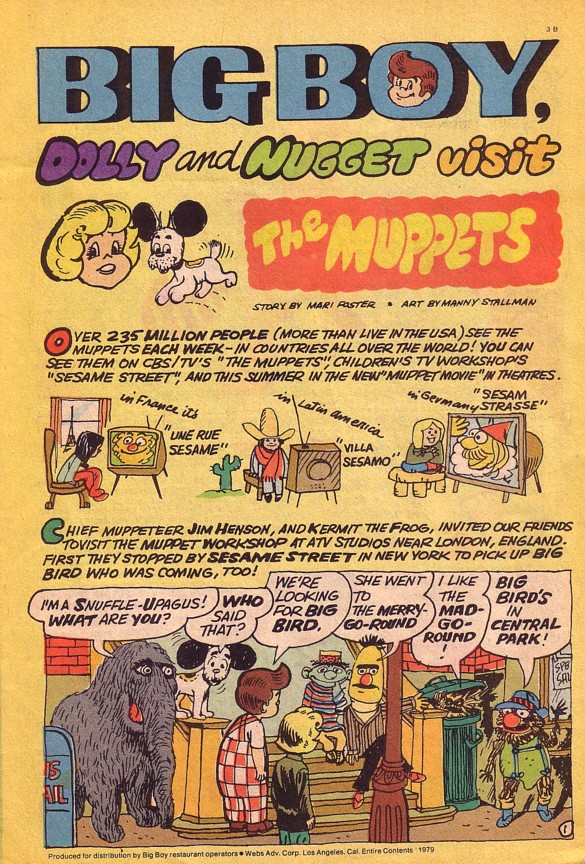 So naturally, if you’re going to write a three and a half page story about visiting Jim Henson in London, the first thing you’d want to do is spend the first page and a half picking up Big Bird on Sesame Street. Right? Or, at least, some version of Sesame Street drawn without the use of reference material. I can grudgingly accept the weird colors and the insistence that Big Bird is female. But what would possess the artist to dress Grover Scissorhands in liederhosen? Why would it occur to you to do that? 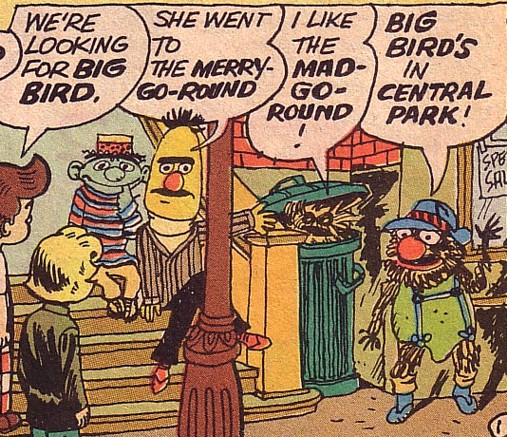 … Although, I have to say, if you’re going to do a story about visiting the Muppet Workshop, you might want to at least get the name of the TV show right. It’s “The Muppet Show,” Big Boy, not “The Muppets.” Oh, never mind. 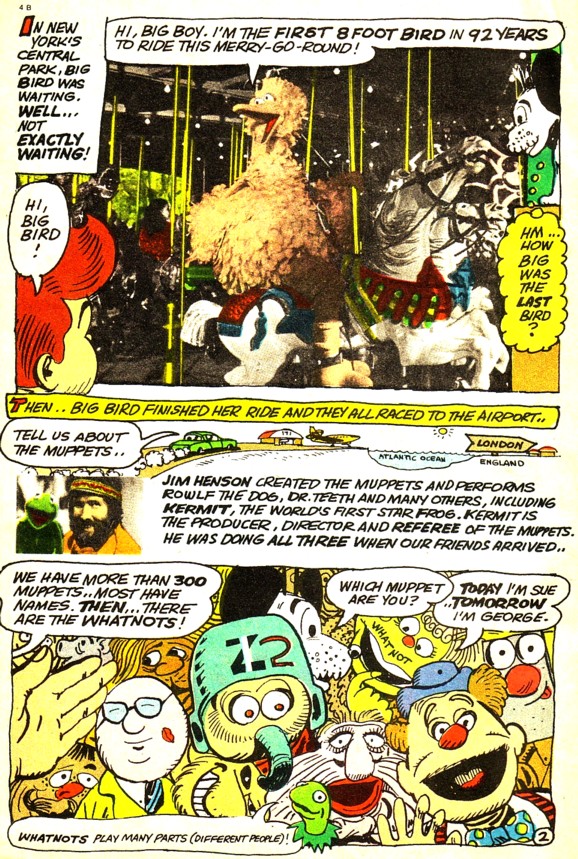 And what do you do with a panel like the bottom one here? I suppose there are ways to indicate in a cartoon panel that you’re seeing a whole bunch of puppets all at once. This is not one of the acceptable ways. And who left lipstick on Bunsen’s face? What are you implying, Big Boy?

But — and I’m sure this is the question that’s on the tip of your tongue at this point — How do Muppets work? 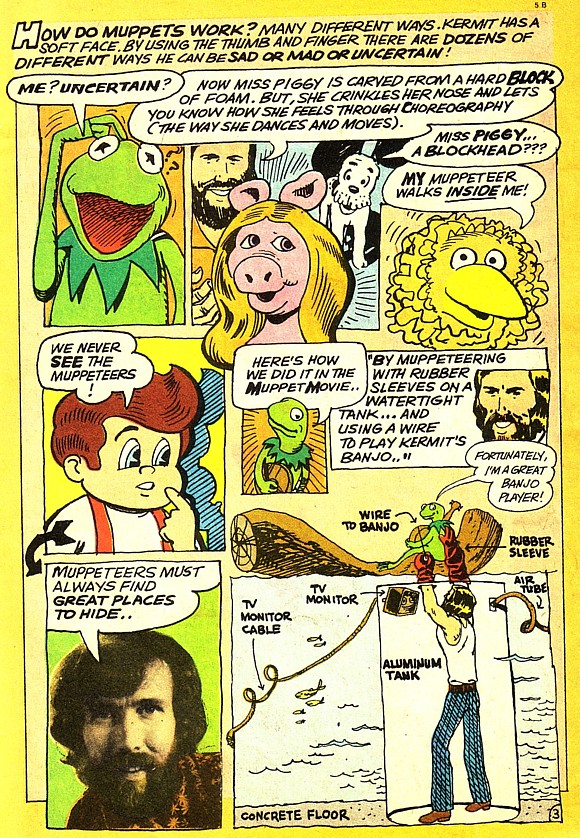 And just when you think that the people producing this must just be completely out of their minds, they pull off an incredibly clear illustration of how Henson performed Kermit’s banjo scene. I’ve never seen a diagram like that published anywhere else — and if that’s accurate, it’s a very cool thing to do. Also, check out Henson’s hottie puppeteering gear. Nice pants!

In the last half page, Big Boy and his pals become puppeteers. Hello-o! 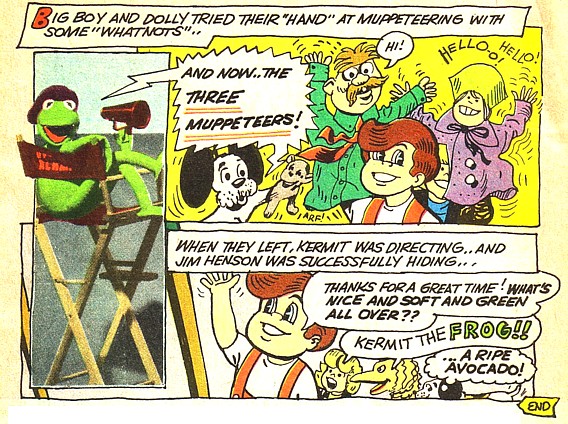 Whew! Well, after a strange trip like that, there’s not much for Big Boy and Dolly to do but go and fight “Mr Menace, The Mad Bomber,” a mummy-faced madman who’s threatening to blow up a TV station unless they give him a million dollars. The cad!