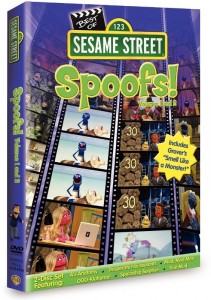 One of the things that always comes up in every article ever written about Sesame Street is the fact that it’s great at entertaining kids and their parents at the same time. In fact, typing those words just now felt like typing “the sky is blue‚ or “water is wet” or “phenylketonurics contains phenylalanine.” It’s just one of those things everyone knows.

But in case anyone ever doubted Sesame Street‘s capacity to make grown-ups chuckle, they’ve now released Best of Sesame Street Spoofs!, a two-disc DVD set containing the best pop culture riffs from the show’s 40-something-year history. There have been so many spoofs over the years that somebody’s bound to yell, “I can’t BELIEVE they left out ______!” when they get to the end, but I really can’t think of anything essential that’s been left out… and there are even two bonus bits on the second disc that have never aired on the show. It’s a pretty good deal.

The set is divided into “Volume 1” and “Volume 2” discs, arranged more-or-less chronologically. The show has gone especially spoof-crazy in the last few seasons, but there’s still plenty of material from the earlier years. There are several Guy Smiley game shows, a few Monsterpiece Theaters (For those of you keeping score, Alistair Cookie’s pipe appears in one of them. Let the outrage commence!), and several songs. Watching this, I realized I know songs like “Born to Add”‚ “Rebel L”‚ and “Cereal Girl” better than the songs they’re parodying, and that’s fine with me. But you know, maybe they should have put a warning label on this thing: “Born to Add” encourages children to commit acts of civil disobedience, such as increasing the number of trash cans on a city street corner and performing unlicensed saxophone solos.

One of my favorite things about any compilation like this is seeing clips that I’ve never seen before. Or if I have seen them, the memories were lost in the apple-juice-soaked haze of my preschool days. On Volume 1, that includes a Dragnet parody with Jim Henson and Jerry Nelson as two Muppet cops attempting to track down the letter W, and Hill Street Twos, in which an entire precinct of cops has trouble with the concept of pairing up to go out on patrol. I think my favorite part of this one might be the fact that two of the monster cops are named Clancy and Mazursky. Mazursky Monster might just be my Favorite Muppet of the Day.

Would you believe there are two Forgetful Jones sketches on this disc? “High 12” is a fun take on High Noon that features Buster the Horse singing a stirring variation on “Do Not Forsake Me, O My Darling” and Jim Henson as Sinister Sam, the meanest hombre west of the Pecos. I love Forgetful Jones and Sesame‘s Western sketches, so this was a highlight. The other Forgetful Jones bit included here is “Oklahoma,” and… well, it’s super-funny and all, but would it be heresy if I said I’ve had enough of it for a while? 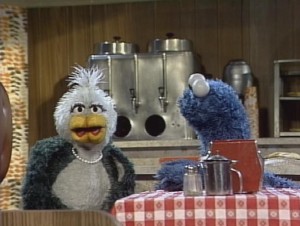 “Twin Beaks” is a Monsterpiece Theater segment, which is interesting, because today they would just present it as its own thing rather than making it an installment of a recurring segment. Cookie Monster plays the FBI agent asking questions in the town of Twin Beaks, and I just have to say: The birds with two beaks on their faces are FREAKY.

(By the way, if you’re wondering whether the parts of the Six Dollar Man really add up to $6.00, we here at the Tough Pigs Center for Mathematics did the calculations for you: The head is a $1.38 second-hand bowling ball, the hair is a $.59 scouring pad, the nose is a 25-cent cork, the body is an olive oil can that cost $1.59, the shoulder joints are 10-cent hinges, the arms and legs are a yard of drainpipe that cost $.50, the hands are 35-cent spoons, and the feet are spatulas that were purchased at two for 79 cents [from a going-out-of-business pancake place over in Passaic]. All for a grand total of… $6.00! You’re welcome.) 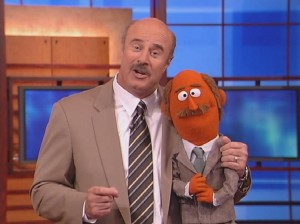 Volume 2 has a lot of stuff from the last decade, like the Count watching “Six Feet Under” and “24,” and “A’s Anatomy.” One of the two sketches starring the Dr. Phil spoof Muppet Dr. Feel is included, and while I understand why they chose the one with the real Dr. Phil, I can’t help but wish they had used the one with Dr. Feel interviewing Bob instead. Because Bob > Dr. Phil any day of the week.

Sesame Street has been attracting a lot of viral-video attention on the internet in recent years for its parodies of stuff like Mad Men, and it would be easy for them to just toss off pop culture-centric bits where the title was the funniest part, but this DVD is full of examples of how genuinely funny the show is. “Desperate Houseplants,” with the hunky gardener giving two plants what they need, is about as subversive a kids’ show segment as you could hope for; “Preschool Musical” hits the satire bullseye without being mean, and while I’ve never actually seen the TV show The Closer, the Sesame parody makes me laugh every time I see it. The only real duds on the Volume 2 disc are “True Mud,” which just doesn’t make much sense, and “The O Show,” but that one is mostly due to Oprah Winfrey’s listless performance as the titular vowel.

In conclusion: Best of Sesame Street Spoofs is definitely worth purchasing, for watching with your children, or by yourself, or with your pop culture geek friends.

Oh, but I have to mention “Jon & Kate Plus 8,” which is a bonus clip on the second disc (alongside Grover’s “Smell Like a Monster”). My understanding was that they shot it with the intention of airing it in season 40, but by the time the season rolled around the real-life Jon and Kate had taken the express train to Splitsville, as the tabloids might say. As it turns out, the sketch is strange and hilarious. During the intro, there are snapshots of the Kate Muppet pregnant, followed by one where she’s clearly in labor. 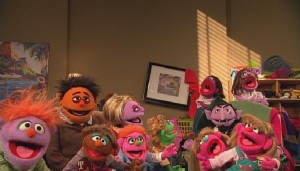 Then Jon and Kate are trying to keep track of how many kids they have, so they invite the Count to help add them all up, as all these Anything Muppet toddlers run around frantically. They determine that there are, in fact, eight… but at the end of the sketch, a bunch more babies start popping up! Where are they coming from?! It’s such a weird thing, I think it’s much more effective as a “lost” Sesame Street segment than it would be if it had actually aired. I don’t know if there are any more never-aired sketches in the Sesame Workshop archives, but if so, they should release them on DVD as soon as possible.

Click here to tell me “Oklahoma” never gets old on the Tough Pigs forum!