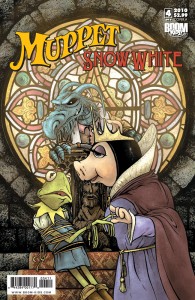 Okay, so there’s this pig, right? And she fakes her death to get away from her stepmom, then starts hanging out with a half-dozen (or s0) street musicians. After eating some old fruit, she slips into a light coma, and waits for some guy with a famous daddy to lock lips with her so they can live happily ever after. And now you’re all caught up. You’re welcome.

In this final issue, everyone and their banana-nosed mother takes a shot at the unconscious Snow White (though I’m not convinced that waking her is at the top of everyone’s priorities). Meanwhile, Kermit and Piggy share some turbulent flirtations, the 4th wall is pulverized, and monsters, monsters, monsters! 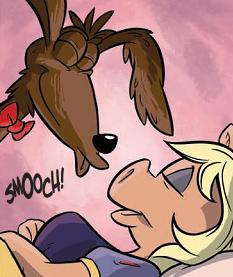 Throughout the whole miniseries, writer Jesse Blaze Snider provided us with one of the most fun Muppet stories we’ve seen from the comic books yet. He realized that the secret to a good Muppet adaptation is to remember that the Muppets rarely actually put on a successful show. And through their failures come hilarity. And through that hilarity comes that classic Muppet feel. Beyond that, he successfully avoided bad puns (which have their time and place, though they’ve been so overused in the last few years) and proved that he understands how a Muppet story works, especially in the way the story wraps up. The downside is that this issue lacks a bit in terms of story, but chances are you won’t even notice. If the Muppet Show was still on, I wouldn’t be surprised if their version of Snow White would turn out just like this comic.

Shelli Paroline has grown leaps and bounds as an artist since her stint on The Muppet Show Comic Book #0. She continues to find that perfect mix of recognizable characters with her own quirky style. She managed to squeeze in a slew of fan-favorite and obscure characters, and she gave us what might be my favorite two pages of Muppet comic art so far (look for the reveal right after Big Mean Carl’s appearance… you can’t miss it). BOOM Studios has continually been building a strong cache of illustrators, and I’m torn as to who I want to see on the next miniseries.

With the talent we’ve been seeing lately, maybe it’s time for BOOM to start publishing a third series? (Hey, it’s worth a try!)

Muppet Snow White was the greatest book published by BOOM Studios all year. From the pitch-perfect writing, the funny gags, the stylish art, and the patented Muppet sensibility, Muppet Snow White makes me proud to be a Muppet fan and happy to have had the opportunity to enjoy it over the past few months. But I’m also saddened to see it end, and I hope there’s another one just like it right around the corner. Only time will tell if next month’s Muppet Sherlock Holmes will provide some healthy competition! 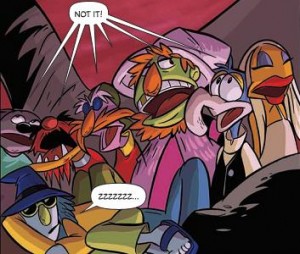 Click here to live happily ever after on the ToughPigs forum!