The following article was written by Erin Roe Yaple, a close personal friend of Tough Pigs who works with children with autism as a behavioral therapist.  Thanks, Erin! 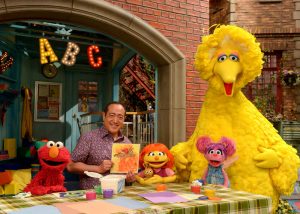 I’ve worked with children with autism for 8 years.  It’s honestly the best job that anyone could ask for (besides writing articles on Tough Pigs.  That’s pretty neat too).  My students love Sesame Street.  Today, one of my students brought in an Elmo toy, another student brought in an Abby toy, and another wore Elmo shoes.  Sesame Street is extremely well-represented at my place of work, and I’m thankful my students have something that they love so dearly.

It’s surprising how limited content is, when looking for characters in the media that children with autism can identify with.  If you ask around, the only character with autism people can come up with is Max from Parenthood.  And he’s very high-functioning, and represents autism on a more comfortable level (he doesn’t hand flap, engage in self-injurious behaviors, etc.).  And that show ended two years ago.  Characters in television with autism are few and far between, which, if you think about it, stinks.

It’s cool for people to have television characters to relate to.  For a long time, I felt like my life paralleled that of Full House’s Stephanie Tanner exactly.  When I was 6, I literally made my family call me “Timmy,” because I felt so connected to the lead character from Lassie.  What Sesame Street is doing in introducing Julia is groundbreaking, and provides children with autism someone to connect with, so I was eager to check out her first episode, which aired on HBO and PBS this morning.  (You can also watch it on YouTube here!)

Julia has autism.  She’s not presented as “an autistic girl,” she’s presented as Julia, who happens to have autism.  Throughout her introductory episode, she isn’t wholly defined by her autism.  Her talents and interests are expressed, her friendships are highlighted, she’s a happy kid who plays tag and paints, just like her friend. She’s Julia.  She is not her diagnosis; her autism doesn’t control her. 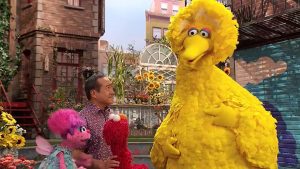 Julia is also celebrated for her differences.  I loved the approach they took in that Big Bird notices those differences, and asks about them.  Her differences and uniqueness aren’t overlooked or underplayed.  Autism is something that people are usually nervous to ask about, but I liked the fact that Big Bird asks big questions, and Alan isn’t afraid to answer.  And sure, at times it’s a bit uncomfortable.  But people often shy away from asking those big questions because they don’t want to feel that discomfort, or they’re embarrassed to ask.  And yet, if we don’t ask, we don’t learn.

The fact that Julia has autism isn’t quickly glossed over and then put aside.  Julia exhibits some of the more visible characteristics of autism, like avoiding eye contact, which makes her autism noticeable.  And I liked that, because it paints a clearer picture of autism and what it can look like.  When Big Bird first asks Alan about autism and what it is, Alan specifies that he is explaining what autism is for Julia.  It’s so subtle, but so important.  Alan doesn’t delve into a medical definition of what autism is, or use a blanket statement describing people with autism. It’s important to note that autism is a spectrum.  I like that Julia isn’t depicted as the mascot for autism.  Alan isn’t speaking for everyone in the autism community, or describing all people with autism based on Julia.  It’s individualized to Julia, because autism is different for everyone, just like anything else. 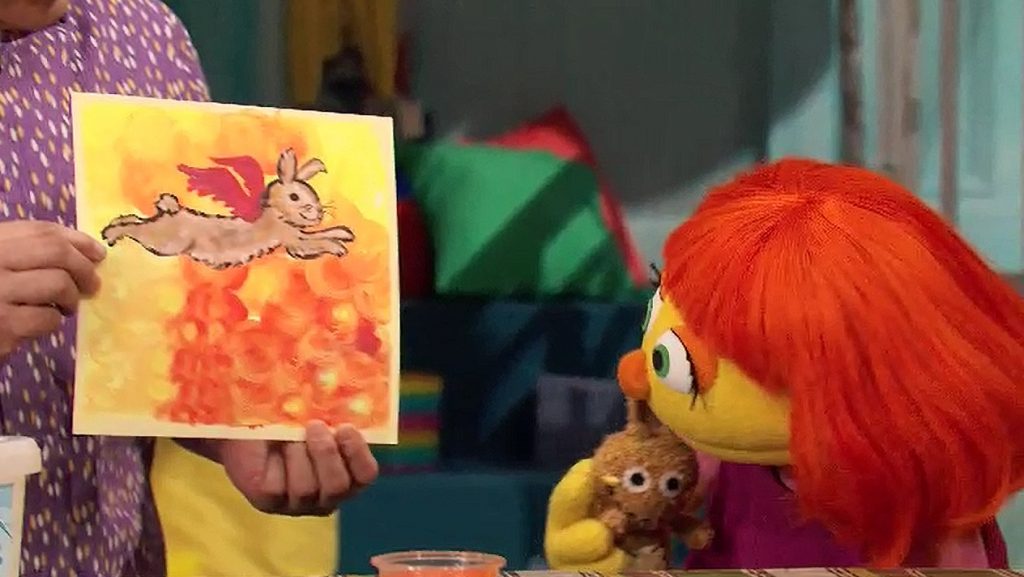 The episode also highlights that while Julia might do things a different way, she can still do them, including painting.  Julia paints alongside Elmo and Abby as they fingerpaint, but she uses a paintbrush instead (children with autism can have unique sensory needs).  The three have different approaches, but in the end, everybody has a painted picture.  Julia gets to stay and play with her friends, and she doesn’t have to go do something else just because she doesn’t like to finger paint.  It was also nice that her painting was pretty awesome, and if I’m being honest… kind of… a lot better than Elmo’s or Abby’s.  I mean, they’re all beautiful, but Julia’s is clearly more fridge-worthy.

I also really liked how much Elmo and Abby embrace Julia.  They truly celebrate her uniqueness, but they’re not stuck on the fact that Julia has autism.  They don’t treat Julia as a separate friend–their friend who has autism.  She’s just a part of their group.  A couple of times, they mention that she might do things differently, because she has autism, but they don’t just placate her.  It seems like Abby and Elmo genuinely have a good time playing “Boing Tag.”  (And who wouldn’t?), and it never feels like Julia is being humored or pitied because of her autism.  Elmo, Abby and Julia are all just great friends.

What I Didn’t Love So Much:

Most of the characteristics Julia exhibits are the widely-known signs associated with autism.  Hand flapping, not responding to her name, avoiding eye contact, echolalia (repeating words said by others), sensitivity to sound, etc.  And while it’s true that these are all characteristics of autism, including these characteristics in the first 10 minutes of her introduction is overwhelming.  It would have been better for Julia’s characteristics to be introduced slowly. 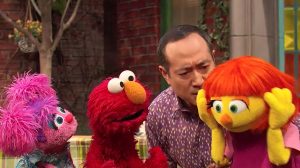 Everything comes up so quickly—first she doesn’t respond to her name, then she doesn’t say “hi” to Big Bird, then the hand flapping, repeating words, becoming upset with the sound of sirens, etc.  This leaves Alan attempting to quickly explain these situations to Big Bird.  The explanations are brief and vague, yet Big Bird seems to understand immediately.  It’s a little too simple — each characteristic explained away, and then understood. If Julia is going to be a recurring character, her autism doesn’t have to be explained so quickly.  We would gain a clearer understanding of Julia if the characteristics of her autism were introduced across more episodes. A slower introduction would have been less complicated, and perhaps less confusing for the viewers.

Throughout the episode, Big Bird seems a little too sad.  At times, the story starts to drift away from Julia, and on to Big Bird being upset.  Every time Julia does something Big Bird doesn’t understand, he gets his feelings hurt.  I know part of that is his confusion and inexperience with autism, but a more positive approach on Big Bird’s part would have made the introduction brighter overall.  And sure, maybe Julia not giving him a high five hurts his feelings; nobody likes to be left hanging.  But he gets pretty mopey, which takes away from the importance of Julia, and understanding her autism.  Maybe the next episode should be one about Big Bird learning how not to be a crybaby. 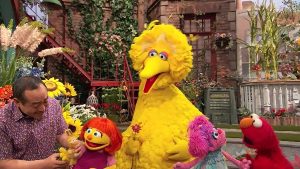 Also, I didn’t like the end, where Big Bird starts flapping like Julia. I understand that the point there is to find similarities between Big Bird and Julia; the fact that they’re different, but not so different.  But it comes across as somewhat patronizing, especially when everyone starts laughing.  I realize they aren’t necessarily laughing at Julia, but just the idea of laughing at somebody who’s hand-flapping feels trivializing.  The similarities drawn are more effective when they’re things like singing and playing tag — not hand flapping, especially when Big Bird can control his, and Julia can’t.

Overall, Julia’s debut episode is fantastic.  I loved the celebration of differences, and I’m still humming the “we can all be friends” song from the end of the introduction.  Autism isn’t something we should shy away from, it’s something that should be embraced, and that’s exactly what Sesame Street does.  I can’t wait to see what else is in store for Julia. (Besides Hooper’s… Store… Get it?!) 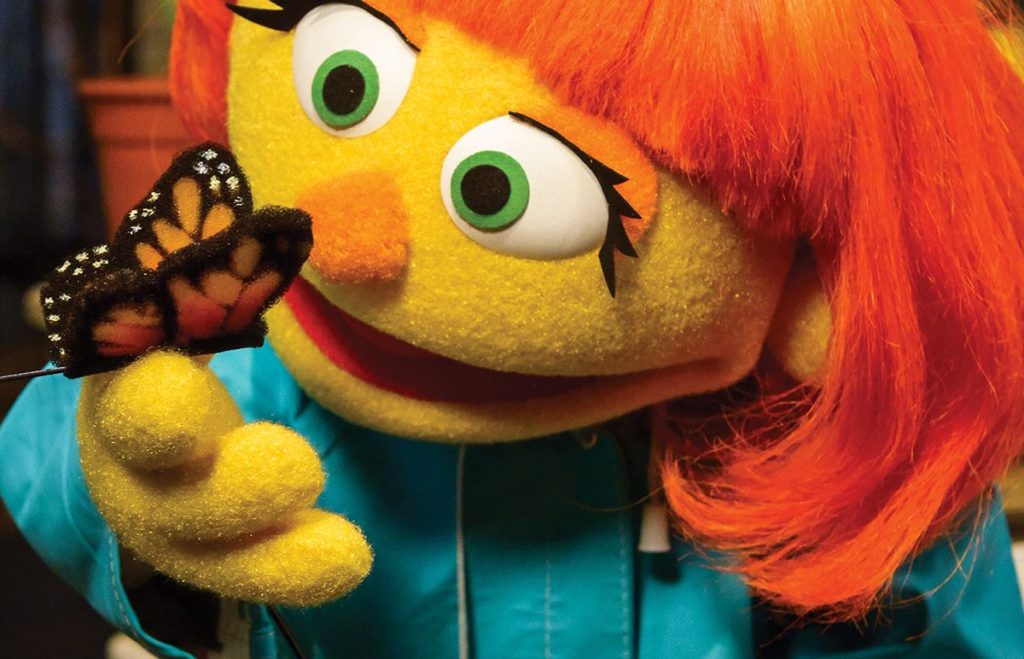