The humans of Sesame Street often play a supporting role to the Muppet stars, but they’re an important element in viewers’ fond memories of the show — as evidenced by the strong fan response to recent questions about the veteran cast members’ future with the show.  With all this in mind, we’re presenting this article series spotlighting the non-Muppet residents of our favorite street. 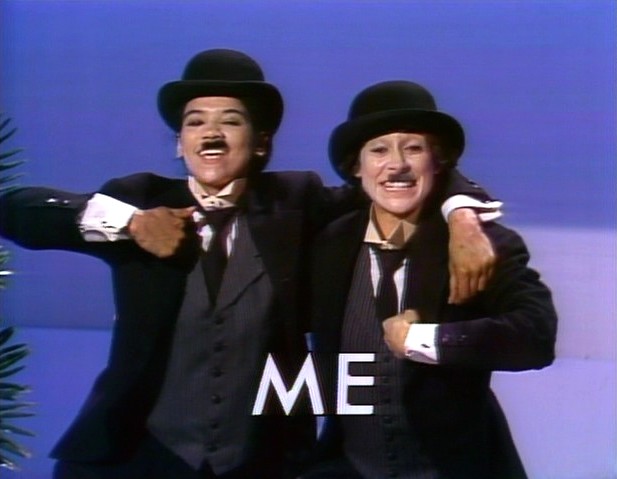 I could write a long intro here, but here’s what I’m getting at: The humans of Sesame Street are as worthy of recognition as any great TV comedy ensemble, from Sid Caesar and his Your Show of Shows co-stars to Monty Python, from the original cast of Saturday Night Live to the kids on Nickelodeon’s beloved Roundhouse.

First of all, the Sesame humans are skilled as straight men, which is probably the way most people think of them.  Does being a normal person and reacting to a less-normal person qualify as a comedy skill?  Sure it does!  Would Costello have been funny without Abbott?  With Ernest have been funny without Vern?  Without a good straight man, a funnyman (or funnybird, funnymonster or funnfleupagus) is nothing.

Most of the Sesame Street Muppets are written to be funny, so there are a million scenes that illustrate this.  But if I had to guess which of them has the most comedy moments with the the humans, I’d have to guess Oscar the Grouch.  The whole point of Oscar is to antagonize people, which means the whole point of a human in a scene with him is to get exasperated.

Here’s a good one from Oscar’s stint as a newsstand owner… It’s a lot of fun to watch the building frustration of Gordon, Susan, Ruthie, Maria, and Luis at Oscar’s every business decision (as if they haven’t known him long enough to expect that kind of crummy service!):

(Hey, did you notice the cameos?  Yeah, you probably did.)

I could write a whole article just about how great the humans are at playing off the Muppets.  But hold on, I got more. The humans are also perfectly competent as comedy performers in their own right.  Back in the day, it was not unusual for the humans to be the main characters of a street story, and to be the focus of most of the scenes.  I’m sure the actors relished the opportunity to occasionally do something other than just explain to Big Bird how many sides and angles were on a rectangle.

Here’s one.  From 1979, it’s a street story in which Gordon, Luis, David, and Buffy (then-cast member Buffy Sainte-Marie) get stranded on the roof of 123 Sesame Street.  A few Muppets appear, but it plays out like an episode of a sitcom.  If you don’t watch the whole thing, at least skip to the 7:13 mark, for David’s frantic insistence that his pigeon messenger rescue plan will work.  Northern Calloway was a funny guy.

Then there was the time Bob asked hip teenager Petey to teach him how to breakdance.  Sadly, this only features a few seconds of Bob trying out some breakdancing moves, but Bob McGrath commits fully to the character’s earnest attempt to be cool.

So it’s decided, then. Sesame Street humans are good at doing comedy scenes with Muppets, and they’re good at playing those moments where their characters get a little silly. But we’re not done yet.  Some of my all-time favorite Sesame Street moments fall into a third category: When the Sesame Street actors play other characters in insert sketches that take place away from the street.  Some of these bits just can’t be done by Muppets, and some of them are just funnier when performed by real, live people.

This segment with Roscoe Orman talking about rain always fascinated me when I was a kid.  I suspect the hard-hitting message about the importance of rain was lost to me because I was so distracted by the sight of the guy I knew to be Gordon sporting a full head of hair.  And then the twist ending!

Here’s Northern Calloway playing a professor, teaching a class of Muppets everything they could possibly need to know about trees.  Barely relevant aside: A childhood friend of mine had a copy of Return of the Jedi that was taped off TV.  Due to a younger sibling’s over-eager finger on the RECORD button, about halfway through the opening Jabba the Hutt sequence, the movie was interrupted by this sketch before cutting back to the film.  As a result, I didn’t see the missing minutes until years later, but I didn’t mind.

They used to do a lot of these kinds of speeded-up motion bits too, where the actors are essentially playing silent film characters.

Speaking of silent film characters, I would be remiss if I didn’t mention Sonia Manzano’s delightful turn as a version of Charlie Chaplin’s Little Tramp character:

You know, it’s interesting… I’m presenting these last few clips as “the human actors playing other characters,” but is that 100% accurate?  Often when we fans talk about these segments, we’ll say things like “when Maria played Charlie Chaplin” or “when David talked about trees.”  It doesn’t make sense, really, that Maria the Fix-It Shop owner would dress up as Charlie Chaplin and go to an art museum, or that Linda the librarian would be hanging out inside a painting.

We understand that that’s not supposed to be David from Hooper’s Store as a snooty professor, but somehow, at the same time, it is David.  And even as children we’re able to accept this  And yet, those characters are so ingrained in our minds that it’s hard to think of them any other way as “Maria” and “Linda” and “David.”  Which is why it throws people off when one of these guys shows up on Law & Order.

Wow, those last two paragraphs got way too heavy for me.  I’m going to cleanse my palate with this clip, which would probably be my answer if someone cornered me in a dark alley and demanded I show them one single classic, human-centric Sesame Street clip that was both funny and educational.

I think I’ve made my case.  I do want to mention, though, that just because I’ve focused on the “classic” human cast doesn’t mean humans on Sesame Street aren’t still making kids giggle with youthful glee and grown-ups chuckle with the wisdom of age.  I mean, just look at this picture of Chris and Alan impersonating Elmo’s grandparents: 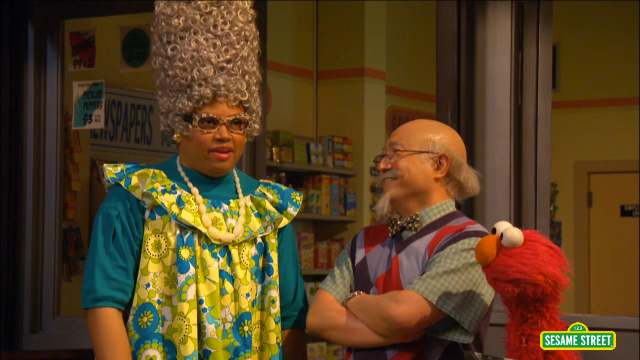 So now there can be no doubt.  The human cast of Sesame Street is a talented comedy ensemble, worthy of lots of awards and accolades and they should all have books written about them.

Oh, and they could also do… whatever this is:

Thanks to everyone who uploaded these clips to YouTube!  Click here to breakdance on the Tough Pigs forum! 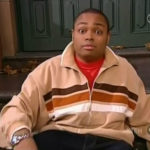 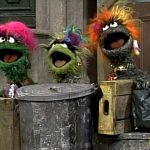 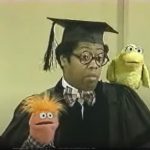