It’s been just about a month since HBO Max unceremoniously removed hundreds of episodes of classic Sesame Street. The world has continued rotating on its axis and orbiting around the sun, but it’s still super-crappy that it happened.

As noted previously on this website, there are still many recent and recent-ish episodes available to stream on HBO Max… and there are still a handful of old episodes from the truly classic era! For some reason, most of them appear to be from similar thematically linked weeks from Season 5 and Season Seven, in which it snowed on Sesame Street.

That’s pretty cool. Literally! HA! But seriously, for this installment of “Sesame Rewind” I randomly chose a classic episode that’s still on HBO Max with the goal of focusing on how nifty it is that there are still a few classic episodes there at all. And that episode is number 0594, from Season 5 in 1974.

As the episode opens, there’s snow all over the ground on the whole street — and we can see snow falling from the sky! Wow, how much time and effort (and money!) did it take to cover the entire set with snow? It looks great! The producers of the show didn’t do that very often, so it’s pretty neat that HBO Max has preserved an unusual episode like this. After a moment, Luis pops up and surprises us. See, a surprise is something that you don’t expect. Yay, this is a fun one.

Luis soon runs into Mr. Hooper, and since none of their other friends seem to be around on this cold winter day, they decide to go to Hooper’s Store for some hot coffee. But when they open the door, they discover somebody else got their first. It’s Cookie Monster!

Hey, that’s swell! HBO Max still has some episodes of Sesame Street from the days when Frank Oz’s characters were frequently present in street scenes!

But what’s this? Cookie Monster has a surprise for Mr. Hooper: He ate all the cookies in the store!

Ugh, just think. Mr. Hooper thought he had a whole store full of cookies, but Cookie Monster just took them away. What an unfortunate turn of events.

Oh. Wait a minute. This is actually a lot like the time HBO Max subscribers thought they had a whole selection of classic Sesame Street episodes, but then HBO Max just took them away. Dang it.

Okay, let’s move on. Later in the episode, Grover is happy when he encounters a bewitching stranger: It appears to be a lady monster who looks a lot like him. But because Grover is not the world’s smartest fellow, he’s actually talking to a snow-monster under the impression that it’s alive. Over the course of a few street scenes, he’s greatly concerned to realize that she’s freezing cold, so he brings her an overcoat, then a warm hat, then a muffler.

To make a long story short, she melts. By the time Luis wanders up and invites Grover to get some hot cocoa (Luis is very big on drinking hot beverages today), poor Grover’s new friend is practically a puddle and he doesn’t understand why. It’s heartbreaking, really.

Aw, man. This reminds me of the time HBO Max subscribers were really happy to get access to hundreds of episodes of classic Sesame Street, but then HBO Max made them melt away into nothingness and the subscribers didn’t understand why. Dang it again.

Okay, what else? Later still, Luis leaves the Fix-It Shop to run an errand, but Big Bird wants to stay inside the shop because it’s nice and warm. Luis temporarily closes the shop and makes Big Bird promise that he won’t let ANYONE come in. That’s right: NO ONE can come in.

Yeah, you know where this is going. After identifying a few noises that he hears, Big Bird’s attention is drawn to the sound of somebody knocking at the door and shouting his name. It’s Luis, of course – and of course, Big Bird refuses to let him inside because he promised that NO ONE can come in.

OH NO. This is like the time HBO Max subscribers temporarily left the app to run an errand, and when they came back, HBO Max refused to let them watch those hundreds of classic Sesame Street episodes! DANG IT A THIRD TIME!

There’s also a couple scenes where a bunch of characters are making snowballs for a big snowball fight, but I can’t figure out a way to turn that into a metaphor for HBO Max. Oh well.

Then the episode ends.

You get the idea. It still stinks like a moldy tomato that HBO Max removed all those episodes, and I hope someday a different streaming service gets distribution rights to them — and then throws a bunch of them at their subscribers, just like Luis and Mr. Hooper throwing snowballs at Oscar at the end of the episode.

P.S. There’s a Mumford sketch in this episode that’s notable because his magic word is just “peanut butter” rather than “a la peanut butter sandwiches” and it features a lady Anything Muppet performed by Jim Henson, who didn’t often play female characters.

Also, one of the educational concepts in this episode is “surprise,” and there are two different sketches in which Herry Monster surprises another character by showing up when they’re expecting to see a different Muppet. How about that?

Click here to come up with repetitive, strained metaphors on the Tough Pigs forum! 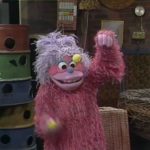 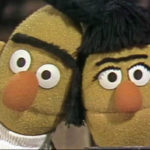 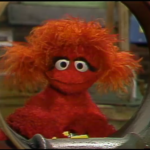 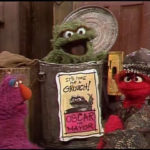