Before I begin my review, and my scathing report on the American political system, I want to reiterate that I am not an American.  I love America.  I’ve been there many times.  But I’m born and raised Australian, currently sitting at a desk some 16,376km from the Oval Office (that’s 10,175 miles for you who haven’t yet adopted the metric system – it’s coming for you!)

It’s easy for my American friends here at ToughPigs to talk about this upcoming election with such passion; it’s because they have a very real stake in the outcome.  Don’t get me wrong, so do I, but at a much, MUCH lower level.  To me the Trump administration is like seeing a fire on the other side of the bay.  It’s not immediately affecting me, but it’s still distressing to watch nonetheless.

And so that’s why I’m here today, to talk to you guys about the upcoming election, but use this episode of Sesame Street (Episode 923 from Season 7, originally broadcast in 1976) as a jumping off point.  Because here, an unqualified TV celebrity is running for President, and we all know how that can turn out.

As we open the show, David and an ethnically diverse range of children play with bells at the Fix-It-Shop, which is a sight you love to see.  Here everyone is equal, everyone gets a fair turn, and there aren’t any white cops shooting children or putting them in cages!  You know, like normal people don’t?  I will say, this whole opening is very strange considering where the show is at these days.  Northern Calloway has to wrangle some kids who don’t really want to do what they’re told, in a segment that has nothing to do with that week’s Street Story.  Now they’ve got kids who’ve literally spent their days on Broadway, but here they’ve got some producer’s nephew who REALLY wants the big bell and has no desire to sit on a stool.

That’s neither here nor there, let’s talk President Cookie.  As like Trump, Cookie Monster is running for all the wrong reasons.  Cookie is in this for himself – he only wants the free cookies he’ll get at all the luncheons he’ll have to attend.  This isn’t even subtext; Cookie straight up admits it.  And sings it, in a jaunty little number where he wants to give a national holiday to people who chew.  At least he has the decency to admit it.

Just like Trump, Cookie has a rotten team of advisors – in his case, Oscar the Grouch.  Oscar introduces the candidate, who, across multiple rallies, makes a speech basically saying, “I think I’d make an excellent President, so vote for me, cool?’, something that feels hauntingly like a Trump rally.  Hey, you don’t get to be President just because you want to be.  Or at least, you shouldn’t get to, but look where we are right now.

Honestly, every speech Cookie makes throughout the episode is a rambling pile of nonsense, except at least in this case Oscar has the integrity to keep him in check and make sure he’s actually discussing personal freedoms, economics and the like.  And the audience eats it up, with one Muppet actually saying, ‘I didn’t understand a word he said, but I love him anyway’.  Oh god, welcome to the Republican party, folks!  I’m fairly sure they have that on t-shirts.

Count Von Count rocks up at one meeting to ask ‘What do you think about people like me?  The people who count?’.  Firstly, Wocka Wocka.  Secondly, Cookie’s answer is ‘You know what counts?  Me getting cookie’.  Again, Cookie is unfair, biased and has no desire to actually help anyone besides himself, like some Presidents I know.  After the campaigns Cookie claims ‘As soon as me get to be President, me going to stop everything and do nothing but eat cookies’.  Replace ‘cookies’ with ‘golf’ and who does it remind you of?  Maria attempts to talk some sense into him, a voice of reason I’m sure is entirely absent in the current administration, by saying that he’ll be far too busy to ‘eat cookies’ (cough, golf, cough).

And now a transcript from what I’d argue is one of the most important scenes in Sesame history something I hope somebody prints out and staples to the face of the President.

Cookie: The President is the boss.  He can do what he want.  Why would anybody go through all this if he no get time to do what we want?  That silly.

David: Well, yeah, but it happens.  You see, you can’t just be interested in yourself, you know, or just one group.  You gotta take care of all of the people.

Maria: All the people.

Look, I know I’m not going to change anyone’s mind with this article.  But hopefully this puts in to perspective how cartoony your President looks from someone on the outside.  And hopefully that might make someone, even just one of you who ‘aren’t political’ or ‘undecided’ or whatever, to register to vote, and to make your voice heard.  Because, in an increasingly divisive world, this could be the most important election in history.  And I can’t vote in it.  So please, go and vote on my behalf. 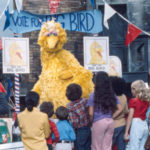 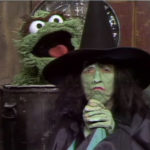 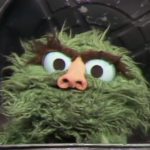 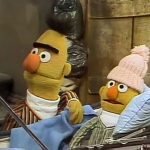 Bert’s Nephew Brad: The History of a Cute Baby Muppet (and His Teeth)