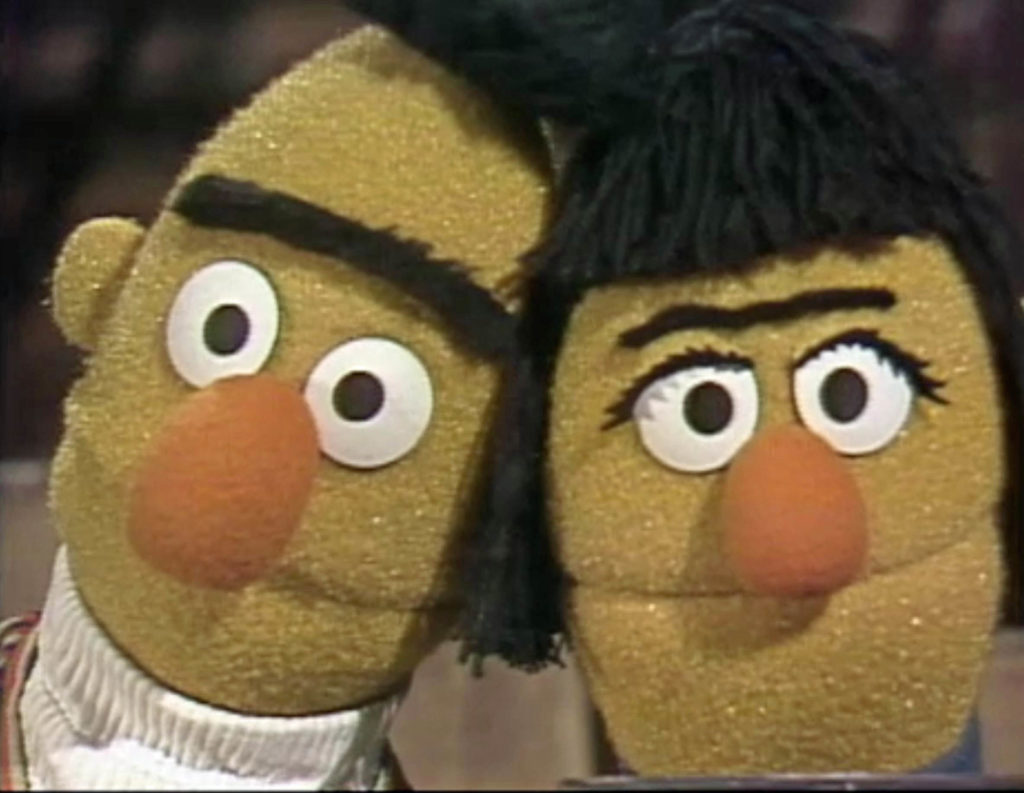 There’s been a lot of speculation over the years over what Bert is into, romantically speaking. This is usually centered around the question of whether he and Ernie are more than just friends. But if we go all the way back to episode 1207 from season 10 of Sesame Street in 1978, we can find another clue about what Bert looks for in a romantic partner. 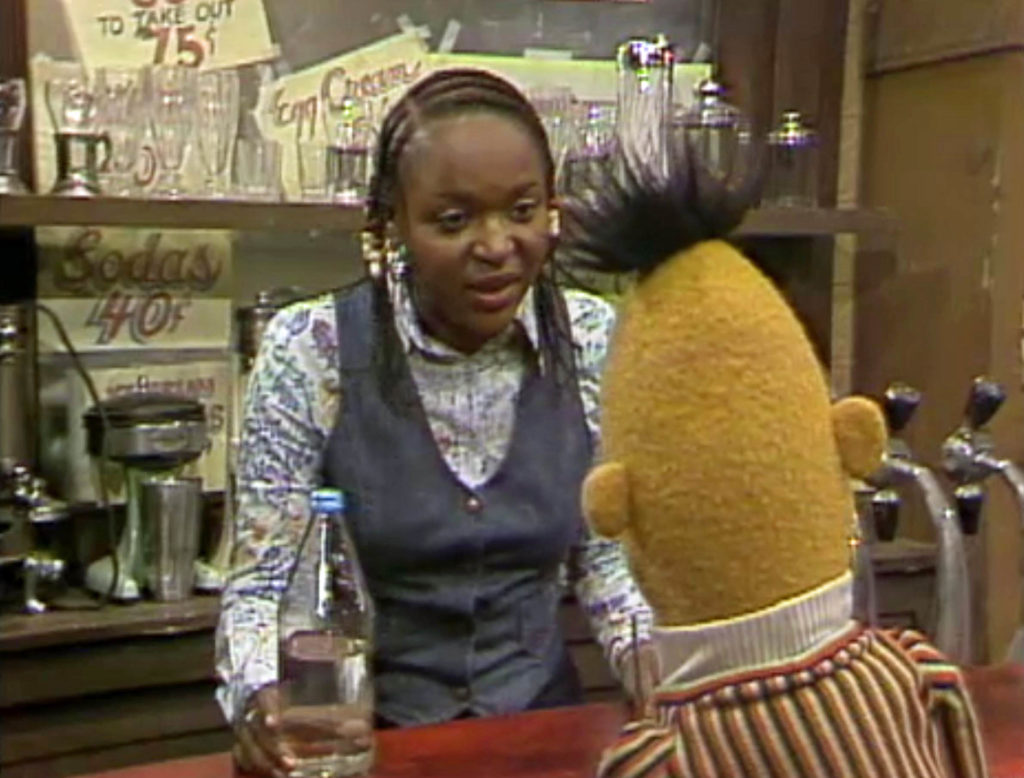 The episode begins with Bert entering Hooper’s Store and asking Olivia, who’s filling in for Mr. Hooper, for a flat, no-fizz soda water. He doesn’t want any syrup, he doesn’t want any ice cream. He just wants soda water, and he wants it flat. Olivia, who must not know Bert very well, is incredulous. She stops just short of judging him for his choice, but she also makes it clear that she thinks it’s completely bizarre. She’s pretty sure Bert is the only person in the world who would order this particular beverage.

That’s when we hear another customer come into the store. At first we only hear the customer’s voice, as she orders… a plan, flat soda water. Then we get our first look at her: 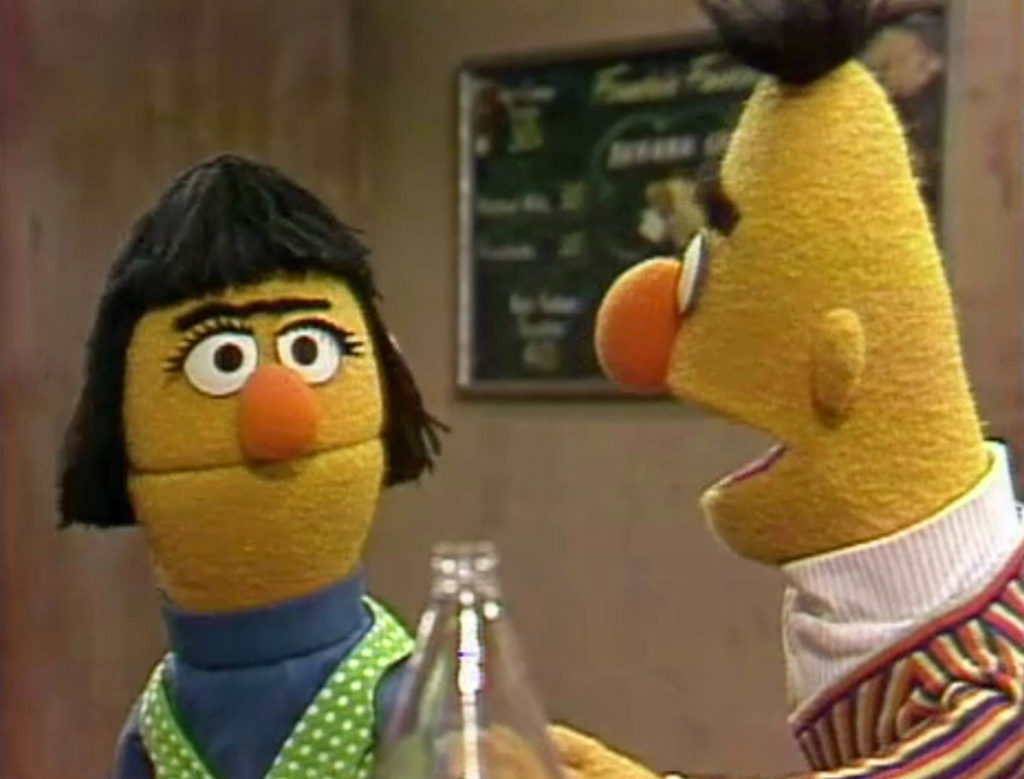 Her name is Bertha, she’s played by occasional Muppet performer Bob Payne, and Bert is instantly smitten with her. Frank Oz does a characteristically excellent job with the puppetry here, as Bert reels from the impact of love at first sight.

After a few inserts, we pick things up in the arbor, where Bertha is talking to her unseen pet Francine inside a carrying case. Apparently Bert and Bertha’s first conversation happened offscreen and we missed it, because when Bert approaches her he already knows her name. Omitting this scene from the episode is an odd choice. Bert stammering his way through an introduction would have been solid romcom stuff. 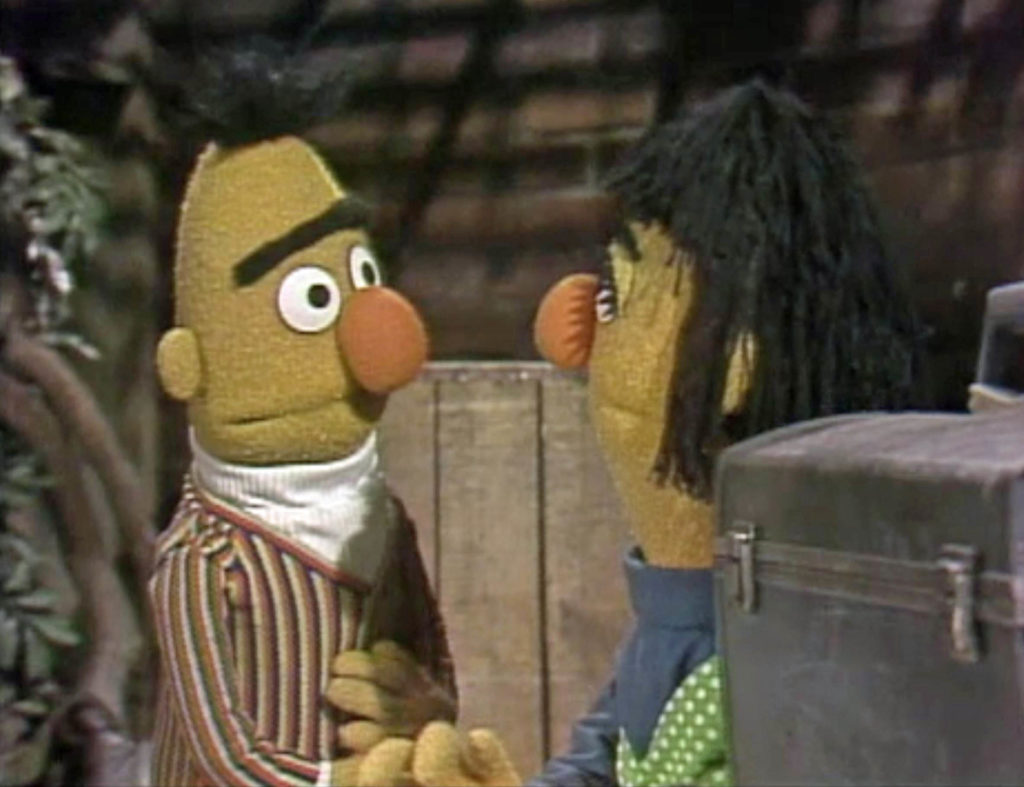 It’s painfully obvious that Bert has the hots for Bertha, but does she like him too? It’s clear that she does when she challenges him to guess what kind of animal her pet Francine is. On Sesame Street, “Do you want to play a guessing game?” is practically the same thing as “Do you want my number?”

Bert immediately guesses that Francine is a horse, and Bertha laughs at him because a horse would be WAY too big for the carrier. Boy, haven’t we all been there? You try so hard to be cool and impress your crush, and then you go and do something stupid like guessing she’s carrying a horse around. Bert, unfazed, continues to guess from Bertha’s clues: Francine is black and white and gray, she makes a “crrr-crrr” sound, she eats bread and popcorn, she has two feet, and she has feathers. Hey, that sounds a lot like…

The revelation that the woman of Bert’s dreams also has a pet pigeon hits him like a ton of bricks. 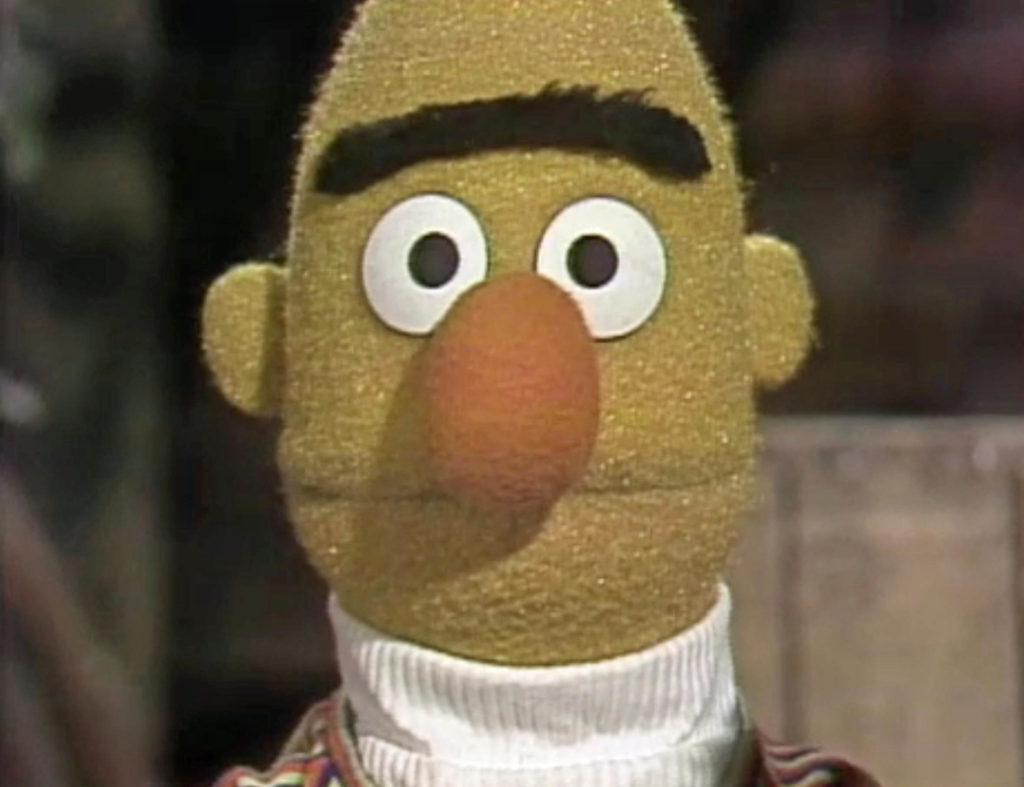 Bertha explains that Francine the pigeon is lonely, so Bert introduces her to his pet pigeon Gus. “They’re friends already!” he exclaims, as the two pigeons ignore each other while pecking at seeds on the ground. 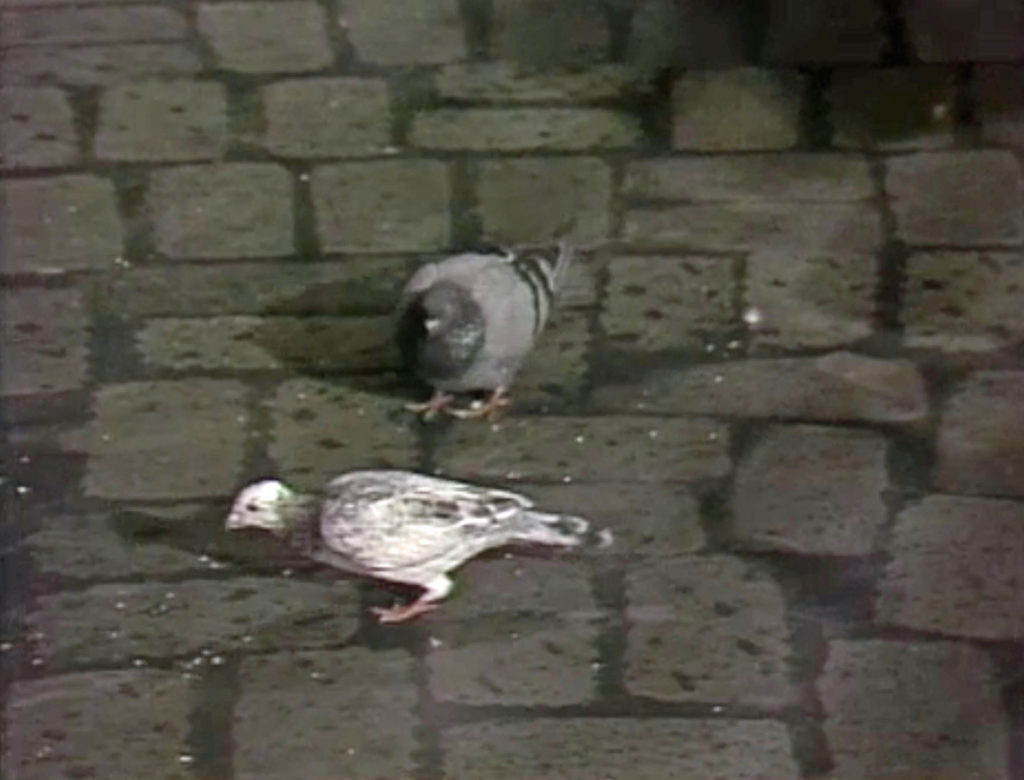 Music swells and Bert sings a beautiful number called “Bert’s Love Song.” The song is actually better known than Bertha herself because it was immortalized on the Sesame Street album Love. I’ve even written about it here on this website. For years we wondered: Who could Bert possibly be singing this to? Turns out he was singing to Bertha!

According to the lyrics of this lovely number, pigeons aren’t the only thing these two have in common. They both like oatmeal with lumps, marching band music, and paperclips. But how does Bert know all this? Did they establish it with some small talk in the store while we were busy watching cartoons about the letter N? For a second it seems like they’re about to kiss, but then they just lean their heads together. I guess it’s still a little early for a smooch. 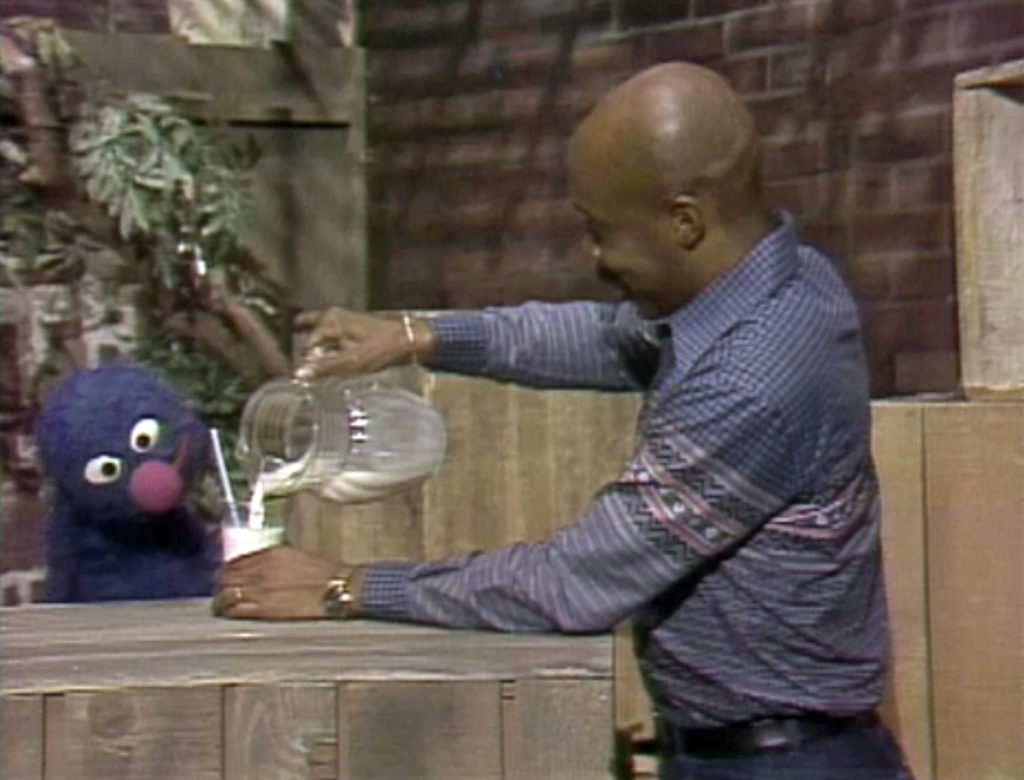 It takes a while before we get to check in on Bert and Bertha again. First we see Big Bird fail at the simple task of answering the phone in the Fix-It Shop, then Grover and Gordon demonstrate “full” and “empty” using a pitcher of milk, a glass, and the always-compelling “puppet drinks from a straw” trick. This segment really takes its time getting to the punchline, which is that after Grover drinks many, many glasses of milk, the pitcher is empty and Grover is full. I hope Grover’s not lactose intolerant.

When we return to our lovers, they’re sharing a soda (flat, presumably) outside Hooper’s Store. Bertha confesses that she doesn’t even like soda – she just drinks it so she can collect the bottlecaps. That’s right, she likes bottlecaps too! They proceed to have a lovestruck discussion on favorite bottlecaps, completely oblivious to Gordon and Olivia saying goodnight, or anything else from the world beyond their table. 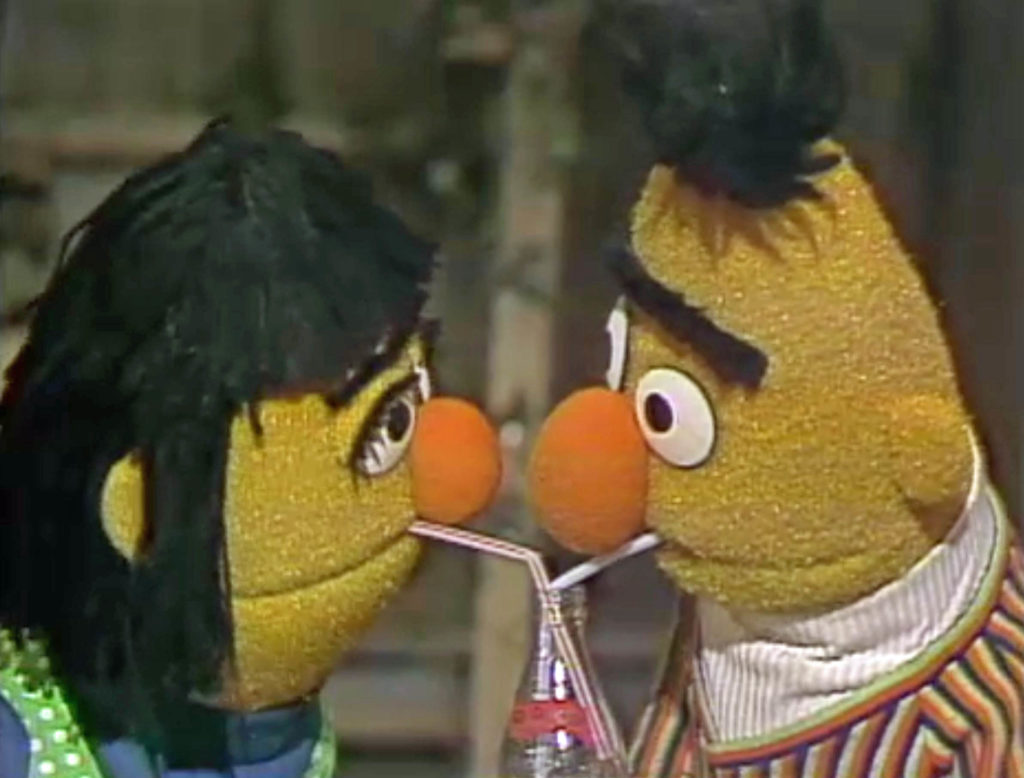 “Bert meets his equally boring soul mate” is a hilarious idea, and I’m kind of surprised it took the show ten seasons to get there. Frank Oz is terrific, Bob Payne makes the most of a character without much personality of her own, and “Bert’s Love Song” is so sweet it deserved to be preserved forever on a record.

So, does this episode confirm once and for all that Bert is attracted to women? Well, I wouldn’t say that.

Here’s what we know about Bertha: She likes the same food and drink as Bert. She has the same hobbies as Bert. And in case you hadn’t picked up on this, she looks exactly like Bert. And he falls head over heels in love with her. 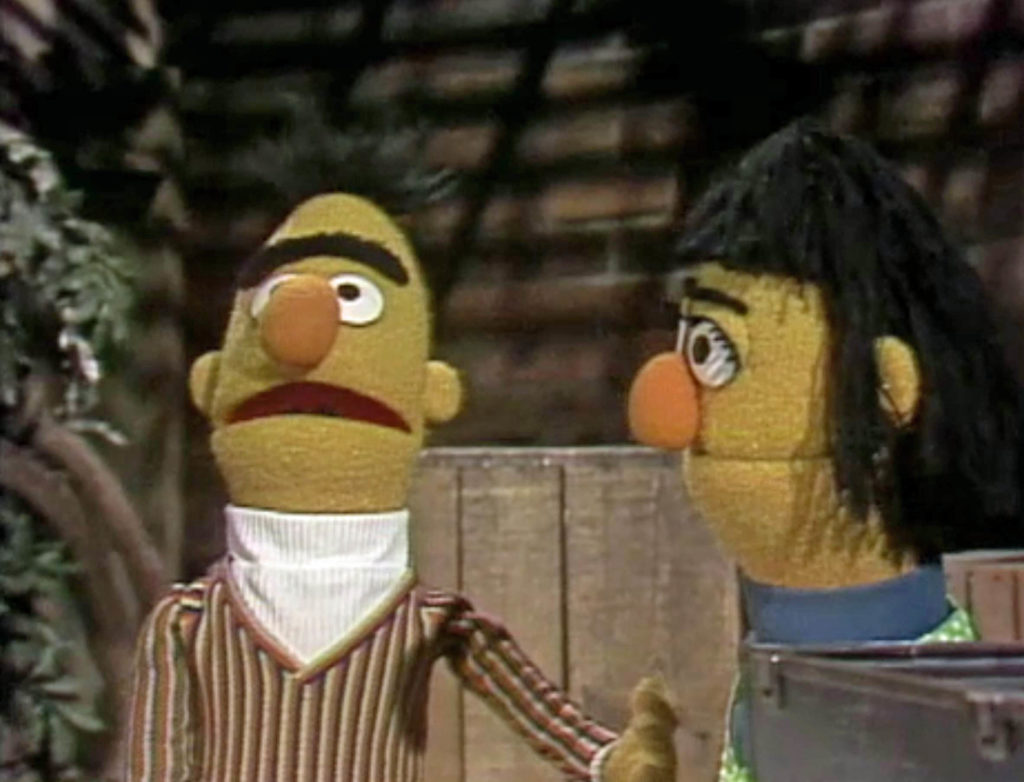 Therefore, the only conclusion we can truly draw is that Bert is a narcissist! He never asks Bertha about her other interests, or where she lives, or anything. And he can’t stop staring at her face – which is practically the mirror image of his own face. Bert’s ideal romantic partner is… Bert.

As far as I know, Bertha never appeared on the show again. I don’t know how long she and Bert continued to see each other, but I think we can safely assume that it ultimately didn’t work out. But at the very least, I hope Gus and Francine managed to make it work long-term. I think those two birds are really good for each other.

Click here to fall in love on the Tough Pigs forum!