Sesame Place Week: Then vs. Now

The following article was written by the Sesame Place book’s co-author Guy Hutchinson.

When Sesame Place opened in 1980 it was a 3 acre “play park.” Today it is a 14 acre “theme park.” This change didn’t happen overnight and it wasn’t expected.

“Sesame Place is not a ‘theme park’ but rather an innovative play park intended to provide educational recreation for families with children ranging in age from pre-school to pre-teen,” the letter read in part.

My name is Guy Hutchinson. In the early 1980s I went to Sesame Place. I was a small child and I was fascinated by it. I didn’t go back for decades and I was amazed at the changes. As I researched the park I found that almost every square inch has changed, some places changing several times, since 1980.

In making the book Sesame Place, Chris Mercaldo and I went through every photo we could find at Sesame Place’s offices and hundreds taken by longtime park employee Greg Hartley. We inspected each and made charts cross-checking each change in the park to try to make sure each important difference was noted by a color photograph. We wanted to make sure that no matter what your favorite part of Sesame Place history was, that you could see it in the book. We also wanted to make sure everything was captured and presented in a way that Sesame Street fans, that had never visited the park, could look at this book and get a full understanding on what happened over the past 35 years.

On Thursday July 30, 2015, I was at Sesame Place for the 35th Birthday Celebration and I decided to take some comparison photos so you can see the changes. All of the inset photos are from the “Amazon preview” of the book and remain copyrighted by the respective copyright holders. The larger photos were taken by me on that day and I tried as best I could to match things up. 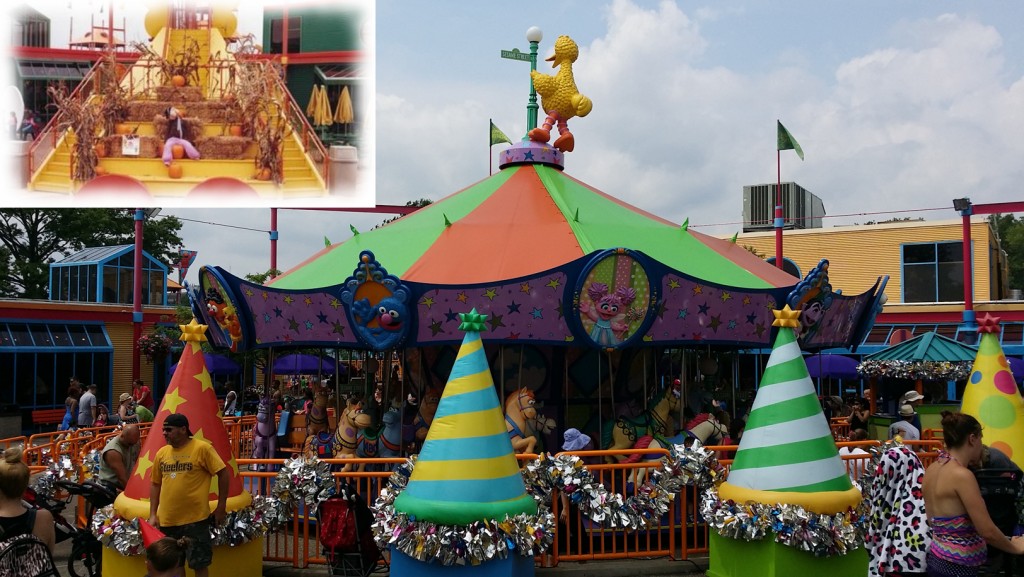 This is where you would start in 1980. The inset shot shows the park’s early 1980s entrance. After going through the turnstiles you would hike up the staircases on either side of this fall pumpkin display and enter Sesame Place through a door way in Big Bird’s mouth.

This area is now in the center of the park. As Sesame Place grew and grew the need for a new layout was solved by moving the entrance from the East side of the park to the North side and making the road in front of the park Sesame Place’s Main Street (or in this case, Sesame Street.) 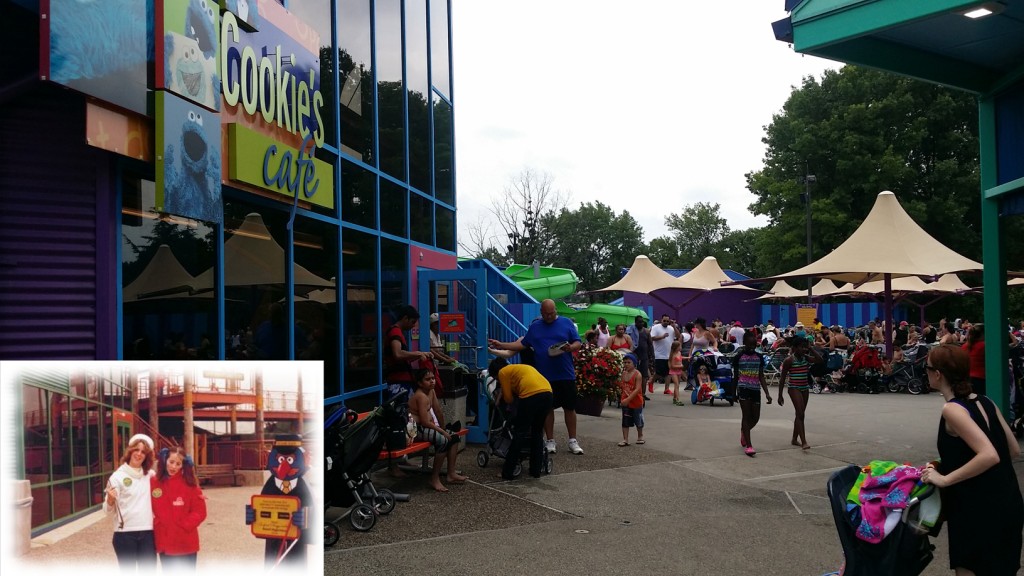 The inset shows a couple employees standing outside The Computer Gallery. Today the building is Cookie’s Café and serves typical theme park fare, cafeteria style. In 1980 it was a computer lab with 56 Apple IIe computers that ran on tokens and played specially designed Sesame Place games. They also had computer classes in the off season and this building was where countless people had their first hands on experience with a computer.

Behind The Computer Gallery in 1980 was a zip-line attraction, Super Grover’s Cable Glide. Today the space is full of lawn chairs for guests to sit as family members enjoy the nearby water feature The Count’s Splash Castle. 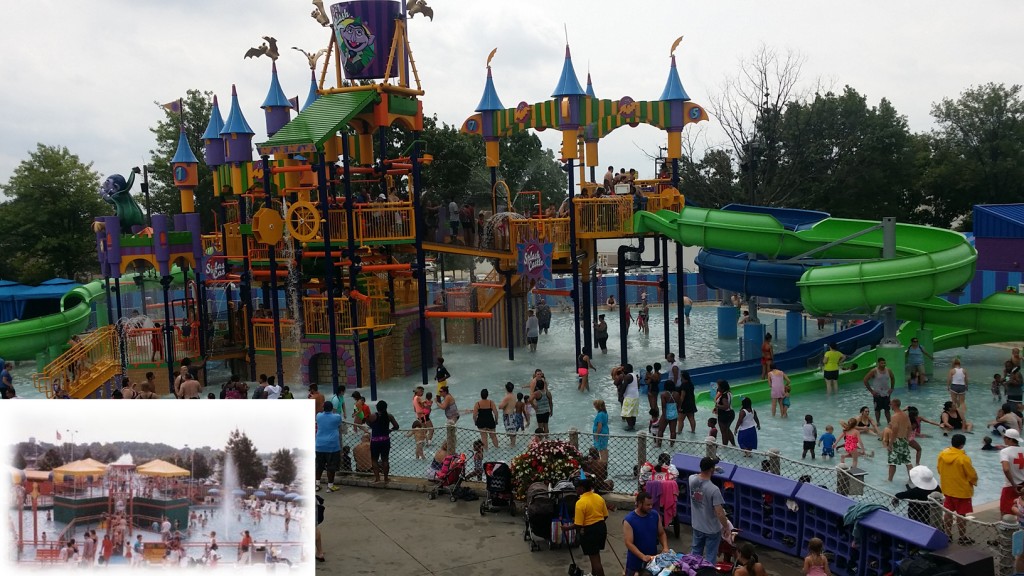 There were two Super Grover Cable Glides and both had closed by 1985 when The Count’s Fount opened. If you went up the staircase behind The Computer Gallery in 1985 you would see The Count’s Fount as it appears in the inset shot. If you go up that staircase today you can see the great view of The Count’s Splash Castle.

Opening in 2009, The Count’s Splash Castle is a massive water play area. It features 4 water slides and over 90 water features including a giant bucket that dumps 1,000 gallons every few minutes – after we hear a countdown from The Count. 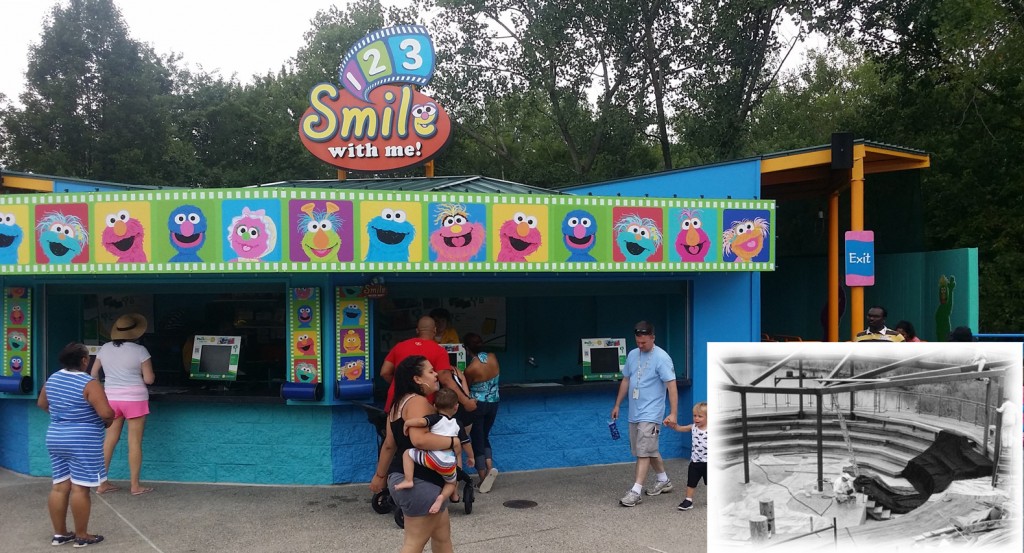 The black and white shot shows workers building The Circle Theater. This theater was home to a trained bird show and a show featuring The Sesame Players, a group of actors who entertained and interacted with the audience.

In the early 1990s Sesame Place added a large theater, the Paradise Playhouse. This eventually led to the Circle Theater being redesigned to house a photo op location called “123 Smile with Me!”

Here you can get photos with two different characters that rotate throughout the day. 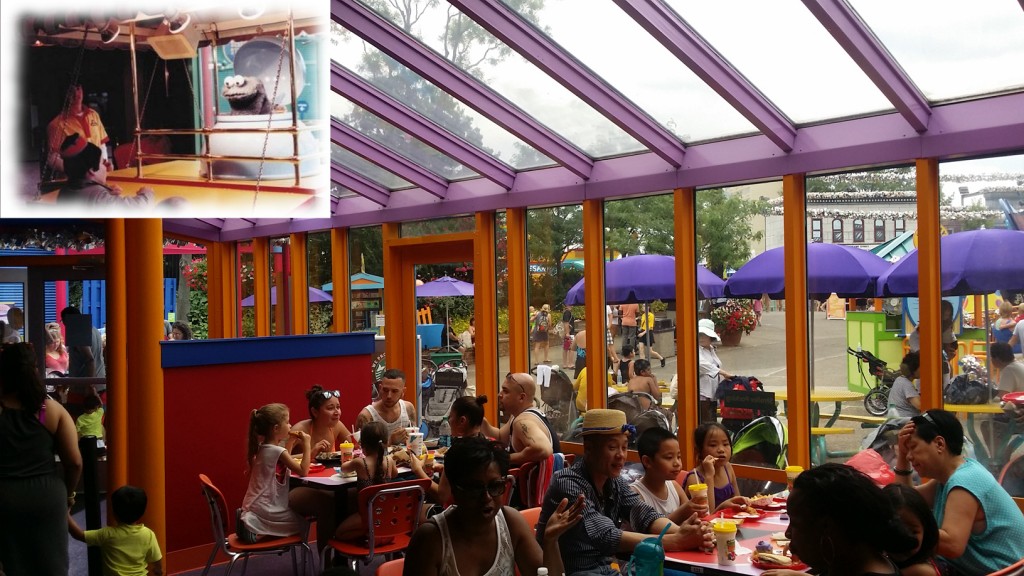 There were no characters on opening day, but they did start appearing in the early 1980s. Also in the early days of the park there were animatronic Muppets (Oscar and Cookie Monster) that would appear and speak to kids. This Cookie Monster animatronic was set up on a cart with wheels so he could be moved, but he often appeared in The Sesame Food Factory as he does in this inset photo. Oscar was usually outside and we have a great photo of him, in his trashy cart, in the book.

This year Sesame Place introduced a new system where guests order their food and then place a transponder on their table so the food can be delivered as soon as it is ready.

Behind The Sesame Food Factory for many years was Cookie Mountain (inset.) This fun climbing pyramid provided challenging play for children from opening day until it was removed at the end of the 2013 season. This area was totally revamped and became Cookie’s Monster Land. 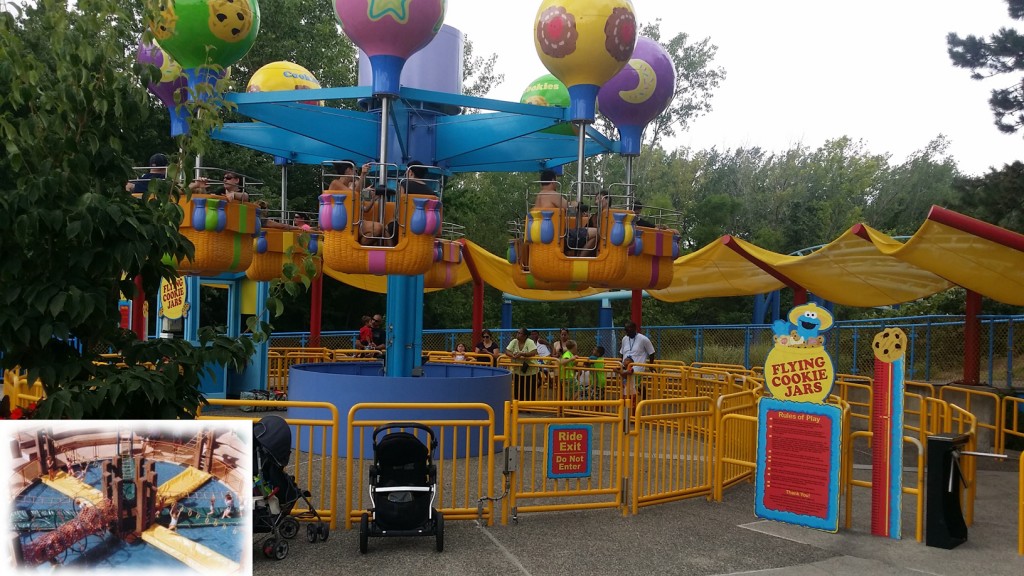 Herry’s Hand Over Water was an opening day attraction that was a combination of jungle gym and splash zone. Herry’s Hand Over Water did not remain at the park for very long. In the book we were able to document the changes to the space with another very similar photo that showed it as home to The Sesame Construction Company just a couple years later.

We also cover when the ride was called Big Bird’s Balloon race before it was renamed Flying Cookie Jars. This ride ascends rather high over the park and gives great views along with thrills to riders. 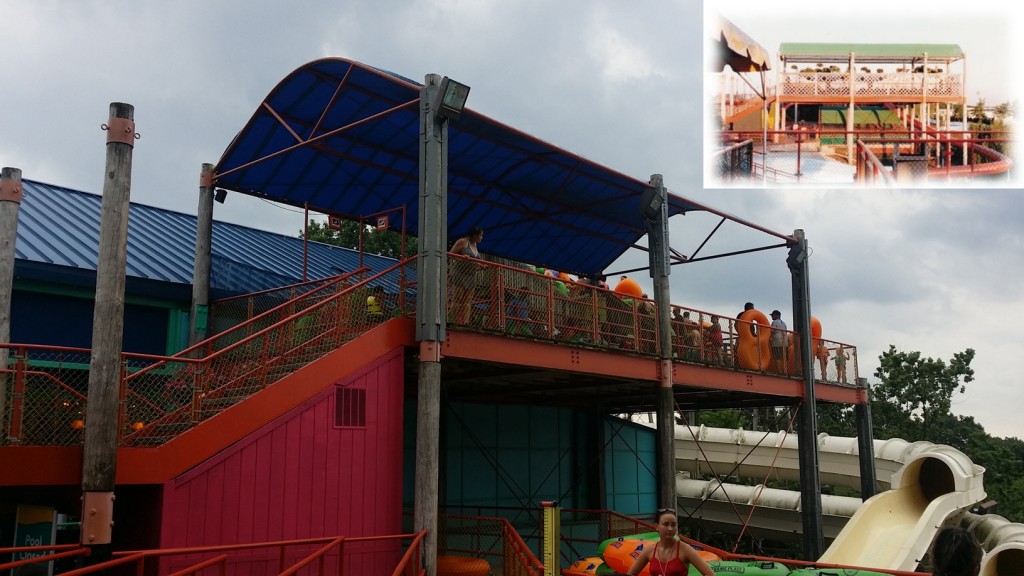 One of the more unique places in Sesame Place in the 1980s was The Adults Oasis. Shown in the inset photo this area was designed to provide a quiet place for grownups to sit. It was situated high enough allow them to watch their kids below.

The photo I took of the structure in 2015 is from a slightly different angle because there is now a giant tree that has grown over the past three decades.

The space is now used to load one of the park’s fantastic water rides. 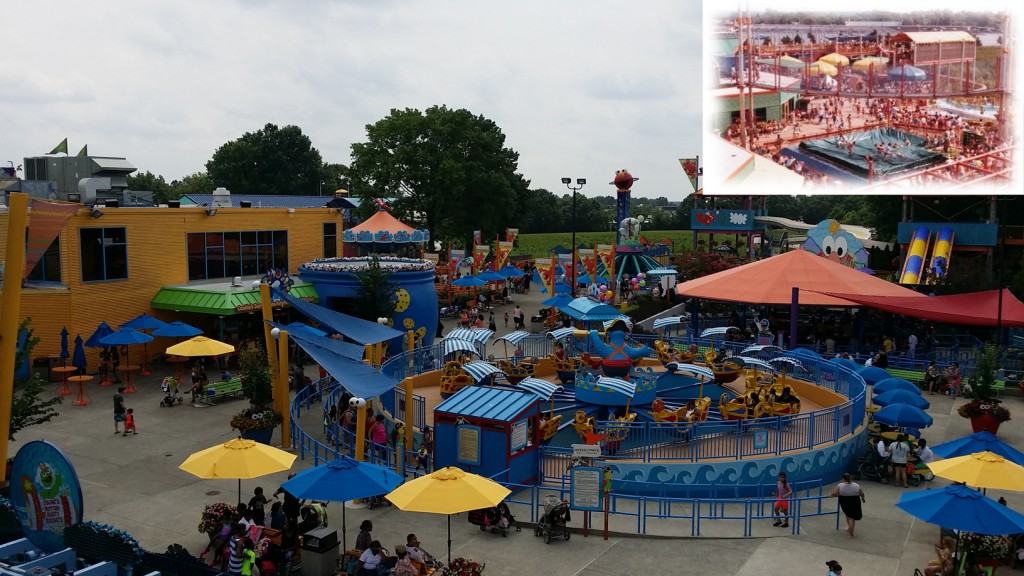 Here’s another shot that just can’t be duplicated today. The inset shot, taken in 1984, shows the park from an angle that guests can’t reach any more. Instead, took my shot from further back.

The blue and yellow tube slides, far right, are the only ride from 1980 that still remains at Sesame Place. 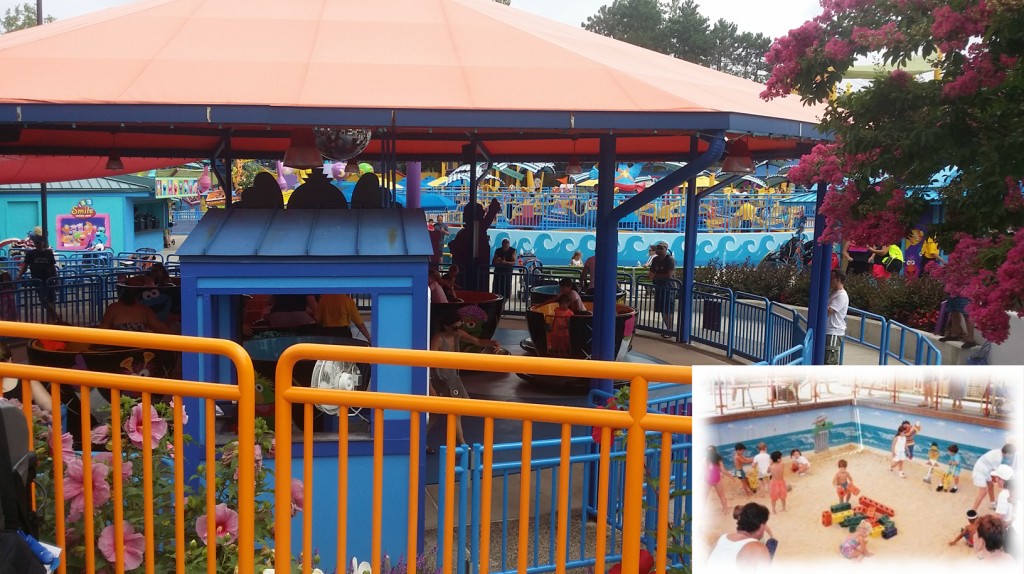 When Elmo’s World opened in the mid 1990s, it really changed the focus of the park and served up a bunch of mechanical dry rides. Over the years more mechanical rides have been added.

The inset photo shows the much simpler, but also popular, Sesame Beach where the toddler set would play with blocks in a giant sandbox. 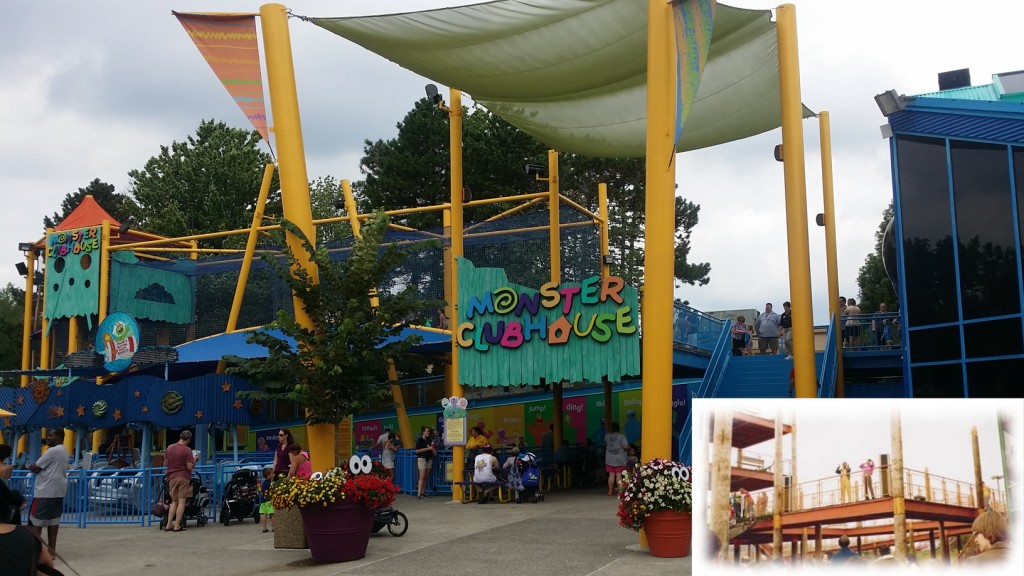 Sesame Place has been visited by many celebrities over the years and we were able to document some of these visits in the book. This inset shot shows two of the earliest celebrity guests at Sesame Place. Actresses Sonia Manzano and Alaina Reed Hall (who you know as Sesame Street’s Maria and Olivia) visited the park and spoke to guests from a platform which would now be in Cookie’s Monster Land.

The platform was then part of the Nets N Climbs (also listed as Nets and Climbs) which was a massive three level set of climbing nets. They were removed in 2013 and replaced with the smaller (but still very large) Monster Clubhouse. 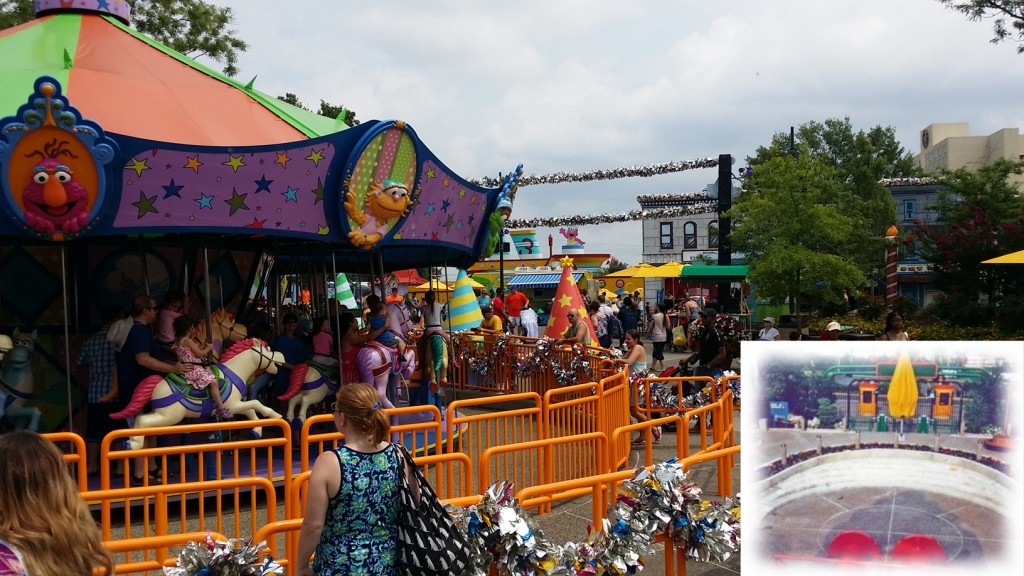 After playing at Sesame Place for a few hours you would walk back out Big Bird’s mouth in 1980 and head out the exit into the parking lot. Today, you can see Elmo waving to you aboard the Good Ship Sesame in the spot where your car might be in 1980. To the right you can see full scale facades that make up Sesame Neighborhood.

The park is so much bigger today and it really shows when you look at these old photos.

In addition to being able to see full, clear versions of these twelve photos I used for comparison, the book provides about 150 others documenting everything that happened at Sesame Place along with some fun and unique photos we were able to find. The book also features the history of Sesame Place in essays and captions that capture so much of the great moments and memories families have had in Langhorne, Pennsylvania.

Making this book was really about telling the story of a park that has changed more in 35 years than any other theme park I know of. It’s an amazing story and I am glad I could share this small part of it here.

Click here to time travel on the ToughPigs forum!

Bill Barretta Teaches You How to Be a Sesame Place Employee