The following article was written by the Sesame Place book’s co-author Guy Hutchinson.

Sesame Place, like any theme park, likes to send you home with a souvenir to remember your time at the world’s only Sesame Street theme park. As you would imagine, Sesame Place has gift shops. Lots of them. There’s Trader Bert’s over by Big Bird’s Rambling River where you can buy beach towels, flip flops, sun block, and much more. Across from 123 Sesame Street is Oscar’s Garage, which is a great place to get spinning, light-up toys, Sesame Street branded basketballs, and various other tchotchkes. Over by the front gates is Finders Keepers which carries a little bit of everything in case you need to get something on the way out of the turnstiles. Plus there are numerous carts and walk-around vendors selling wares.

The biggest of the gift shops is Mr. Hooper’s Emporium. Opening with the park in 1980 this massive shop has a wide variety of clothing, toys, and collectables.

Mr. Hooper’s Emporium also boasts having the largest selection of Sesame Street Plush Characters in the United States.  It’s a pretty impressive visual. The store not only has a wide variety, but a ridiculous quantity of each on display. 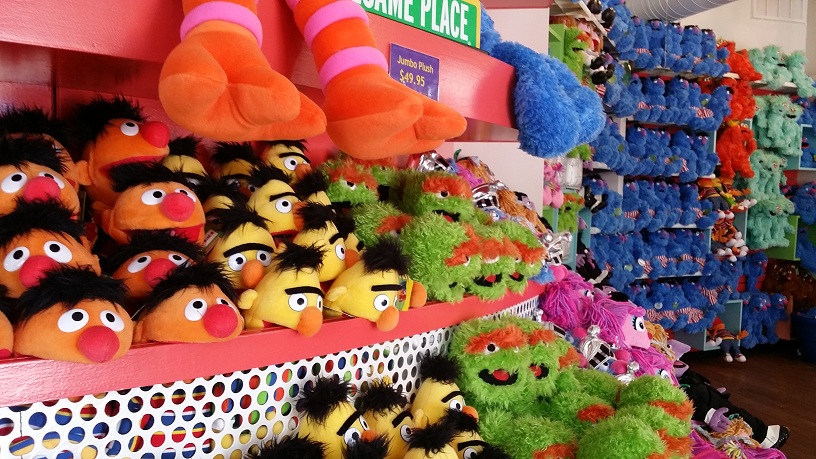 As you might imagine, plush dolls are very popular with the toddler crowd that frequents Sesame Place. You’ll see kids dragging around giant Murray and Big Bird characters as they walk around the park. Mr. Hooper’s Emporium also stocks quite a few of the characters you won’t find at your local Wal-Mart or Target. 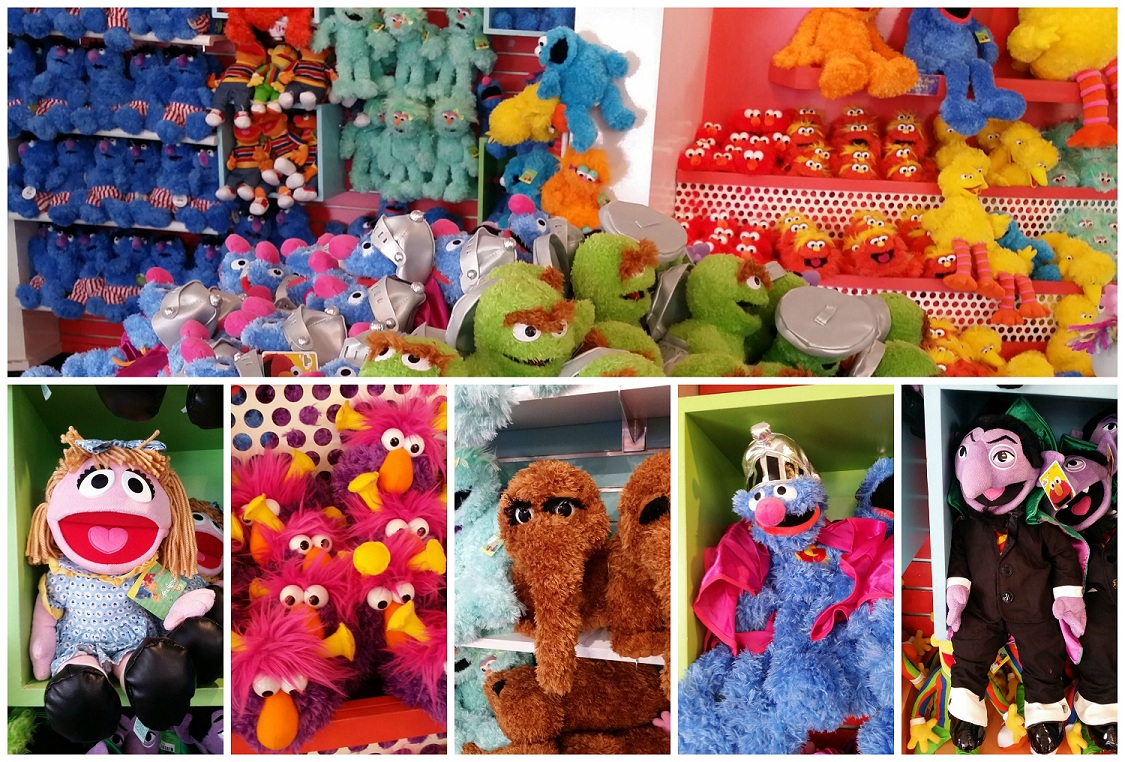 In 2012 Sesame Place started selling the ‘Classic Character Collection.’ This brought out stuffed dolls of some of the characters beloved by some of us… ahem… older folks. The first plush was the orange and white dog, Barkley (or Woof-Woof if you’re really old school.)

The next doll in the Classic Character Collection was Two-Headed Monster, and currently the exclusive plush is Herry (complete in his white and red striped pants). Who will be next? I am hoping for Herbert Birdsfoot. 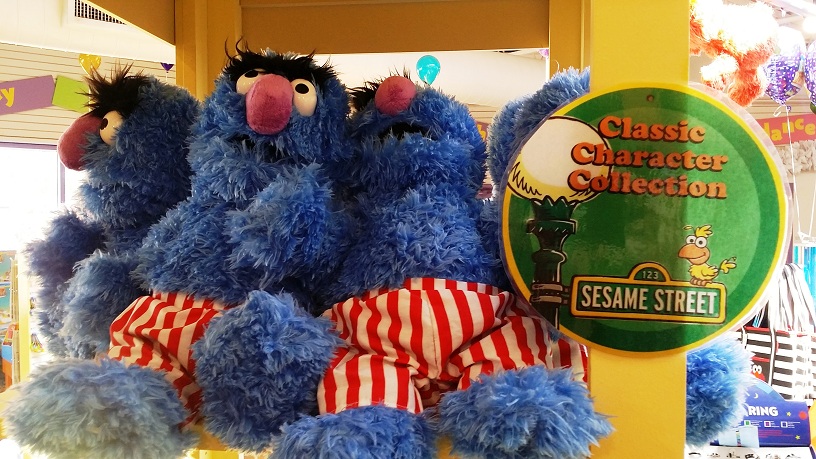 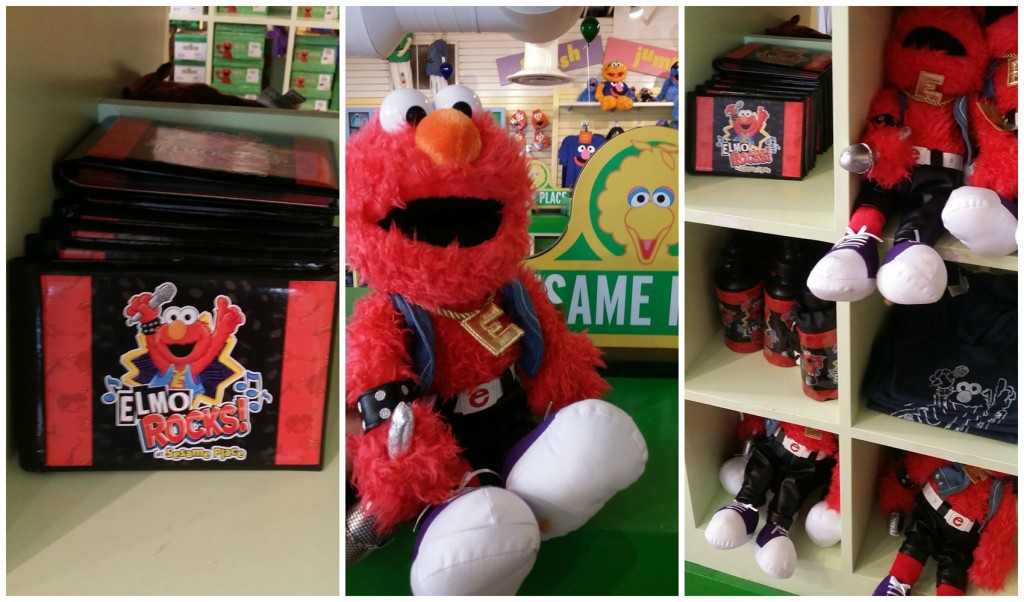 “Elmo Rocks” is one of the most popular stage shows at Sesame Place. In the show Elmo and his friends are saddened to find out they can’t see their favorite rock band so they decide to put on a concert. Cookie Monster raps “C is For Cookie” and dances like Kid N’ Play. Seriously.

Sesame Place has a variety of Elmo Rocks merchandise including shirts, photo albums, and drinkware. 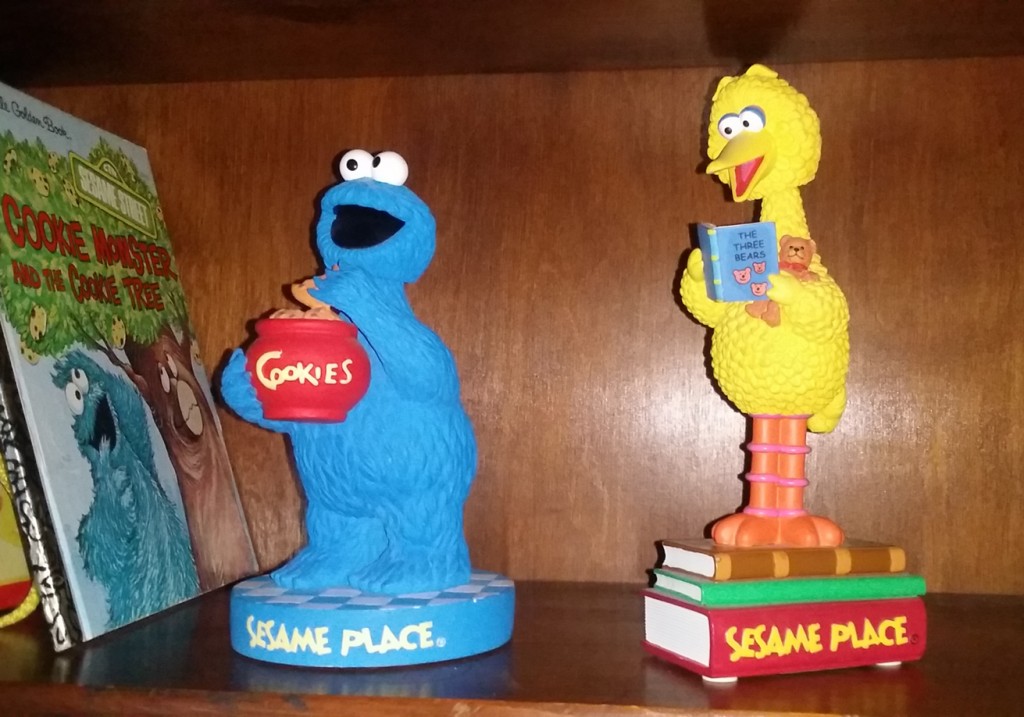 Here are a couple of bobbleheads featuring an older Sesame Place logo. This “dancing letters” logo was used on merchandise and print materials often in the mid 1990s to early 2000s, although the park’s signage and main logo remained the same. 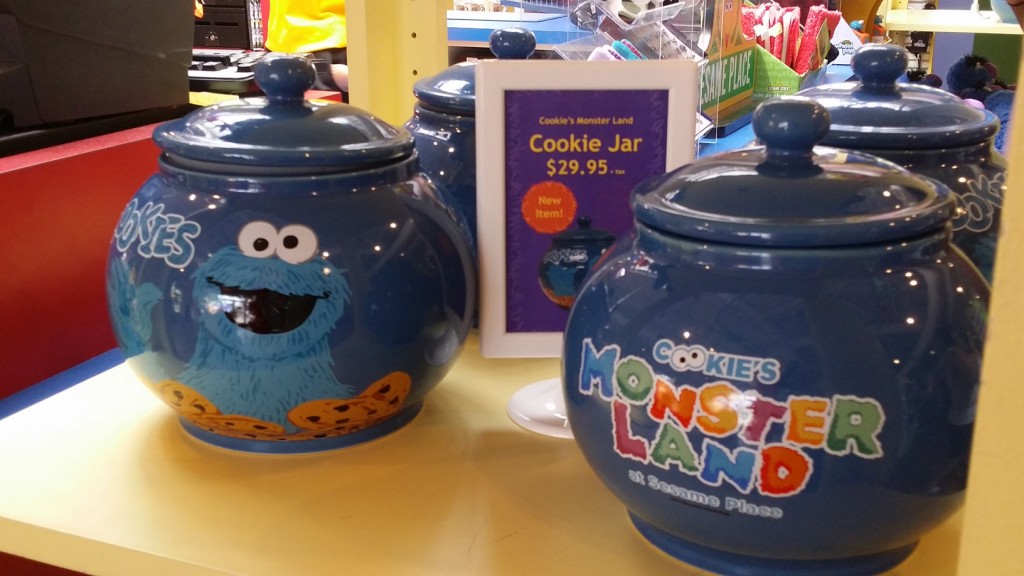 This large blue cookie jar is designed to look like the monstrous cookie jar that serves as an icon for the Cookie’s Monster Land section of the park . That massive cookie jar houses ‘Cookie’s Sometimes/Anytime Food Market’, but you can put whatever you want in the home version.

You can go all Sometimes Food. I won’t judge you. 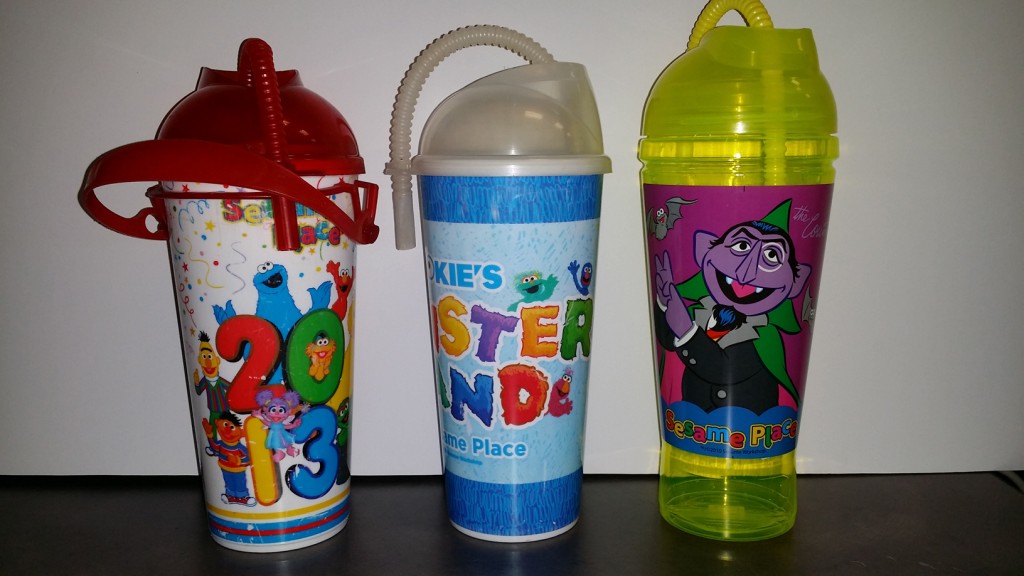 These large plastic cups are a staple of Sesame Place. They are available in multiple designs with many different characters, including Count Von Count.

The two cups on the left are the season passholder cups, from 2013 and 2014. Sesame Place releases a different design every year and passholders can purchase this special cup to get free refills all summer long. It’s not a bad deal if you remember to bring your cup with you.

Really, you need to remember to bring it home and wash it in-between. Otherwise I will judge you. 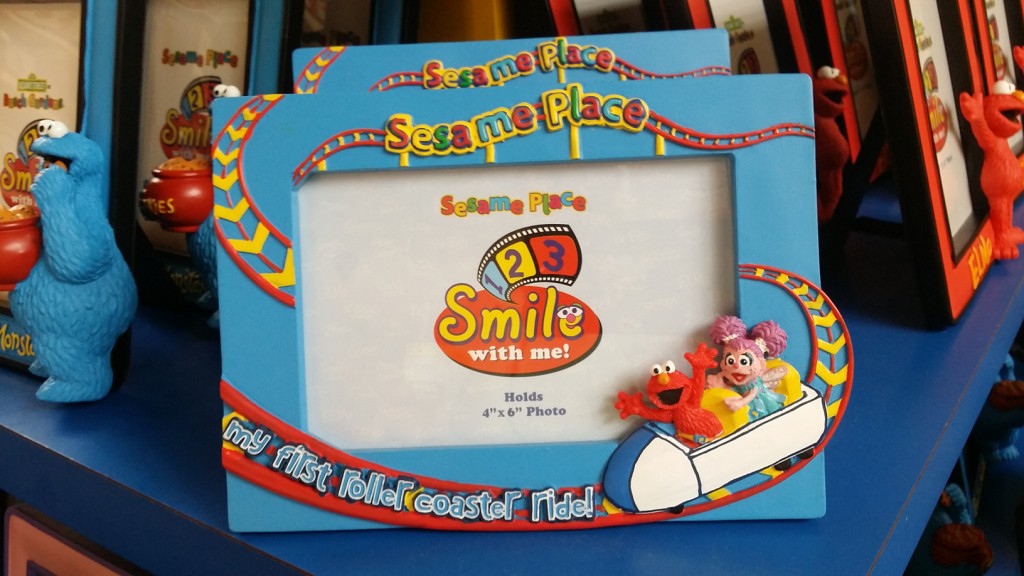 Sesame Place park president Bob Caruso wrote the foreword to the book Sesame Place. In the foreword he points out “Sesame Place is special because it has so many ‘firsts’ for families – a first roller coaster ride, the first time they brave a water slide… countless family memories have been made here.”

This frame celebrates a child’s “First Rollercoaster Ride.” It’s a perfect display for the ‘ride photo’ available at the end of Super Grover’s Vapor Trail. 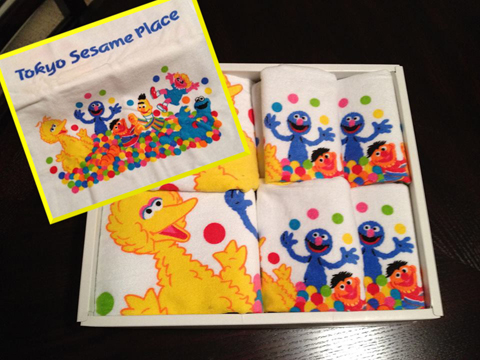 Sesame Place in Langhorne, PA is the only Sesame Place. But it wasn’t always the only one. In the early 1980s Texas had a Sesame Place that only lasted a couple years, and in 1990 Sesame Place Tokyo opened and remained until 2006.

These towels show characters playing in The Count’s Ballroom. The main designer of Sesame Place, Eric McMillan, invented the ball crawl in the late 1970s and Sesame Place was one of the first places to have one. 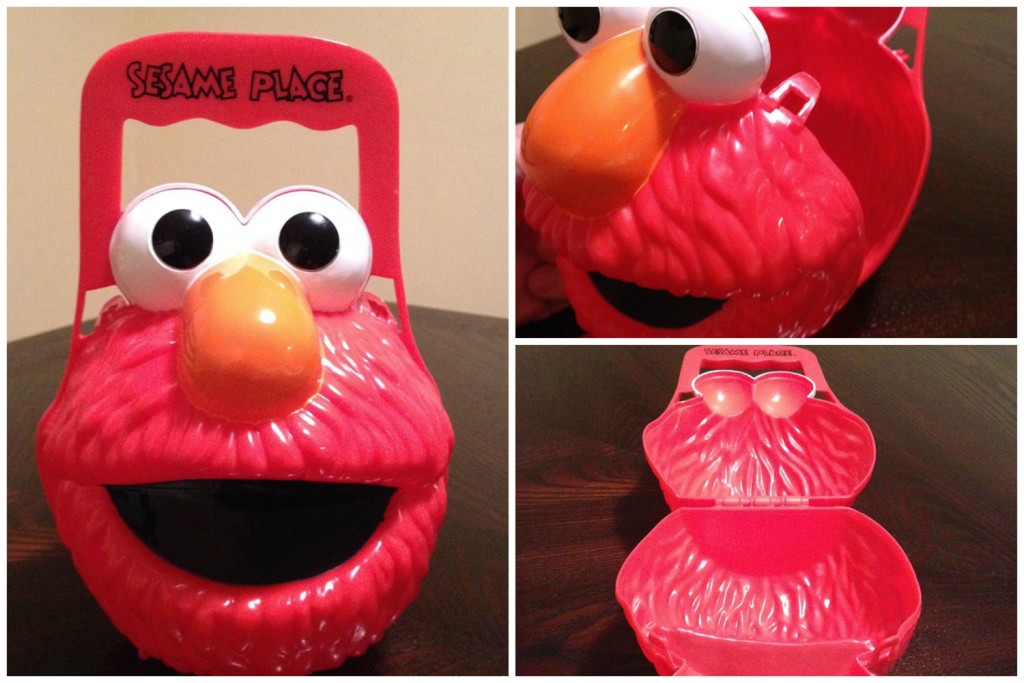 Sesame Place kids meals used to be served in these cute containers that could then be reused for lunches or crayons or anything else once you arrived home. You could also try and carry your lunch home with you, but I can’t imagine French fries would keep well in a plastic lunchbox on a summer day. 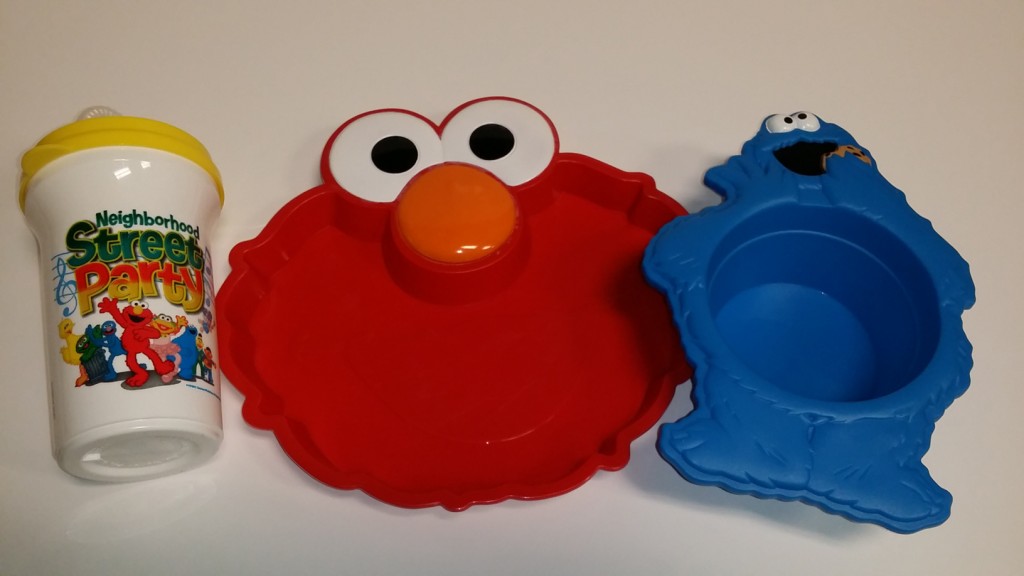 Today kid’s meals are served on reusable Elmo plates in Elmo’s Eatery and Cookie Monster plates (not shown) in Cookie’s Café. Also in this photo is a Cookie Monster ice cream bowl and a kid’s sized cup, advertising the parade (I also have some of these with the Very Furry Christmas logo on them.) 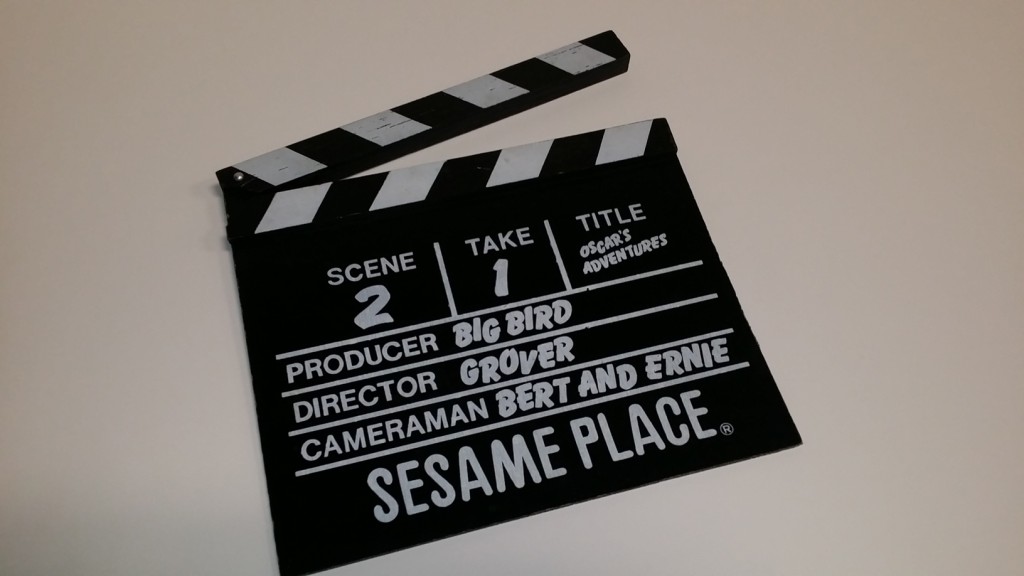 This toy director’s slate advertises the fictitious movie Oscar’s Adventures which is a Big Bird Production. The film went over budget and Grover asked that his name be removed from the final film. Ernie did a commentary track for the DVD.

I have also seen some clapboard with the Sesame Place name but no other details filled in.

The Parker Brothers’ Monopoly game originally evolved in the public domain. This is why you see so many versions of it. This one is based on the county that Sesame Place calls home and Sesame Place appears alongside dozens of local businesses. This version of the game is a more upbeat game than the original as Sesame Place replaces ‘jail’ on the game board. 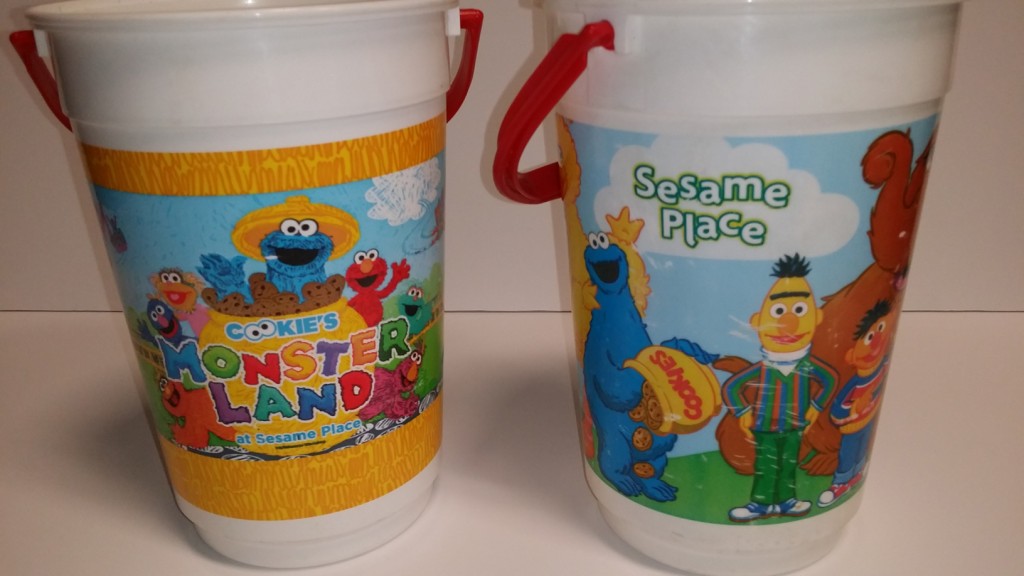 Like the souvenir drinking glasses, refillable popcorn buckets are available at Sesame Place. These plastic buckets have a handle and lid and can be reused for toys and whatnot once you are done with the popcorn. 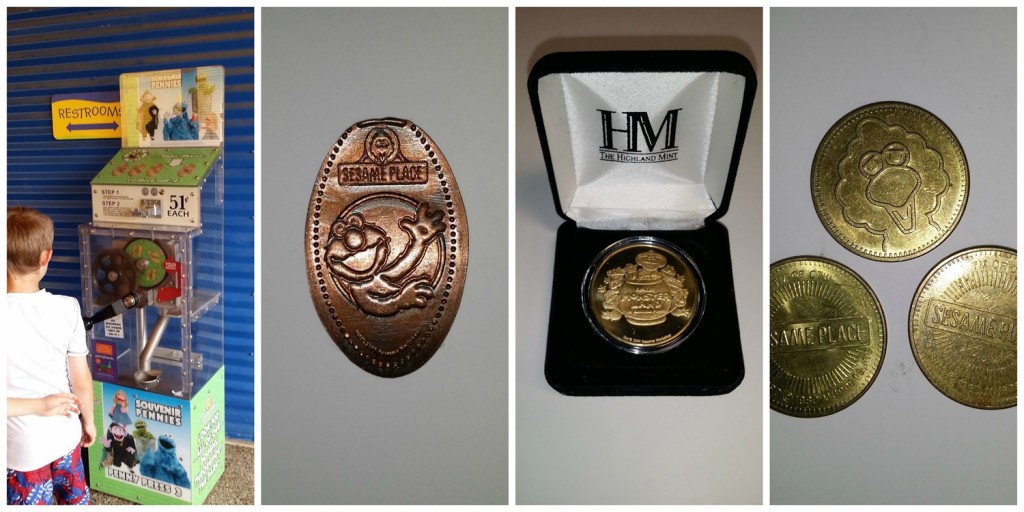 On the left you see one of the Sesame Place penny press machines. These are like the elongated coin machines you find at other tourist destinations. The user inserts two quarters and a penny and turns the crank to create a pressed penny with the Sesame Place logo and one of four characters, like on the Elmo coin shown above.

The Highland Mint produced commemorative coins for the 2014 opening of Cookie’s Monster Land (third from left) which came in a black velour jewelry box. 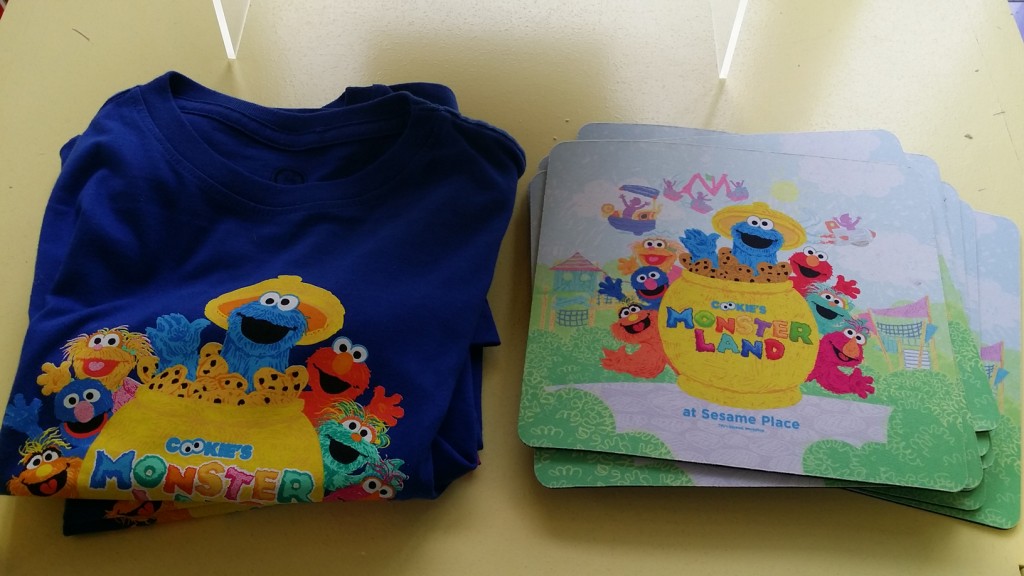 Cookie’s Monster Land opened in 2014 and replaced a bunch of original 1980 attractions with newly designed mechanical rides: Honker Dinger Derby, Oscar’s Rotten Rockets, and Captain Cookie’s High C’s Adventure as well as new play areas and more. This section of the park is very popular with guests and there is a variety of Cookie’s Monster Land logo products available. 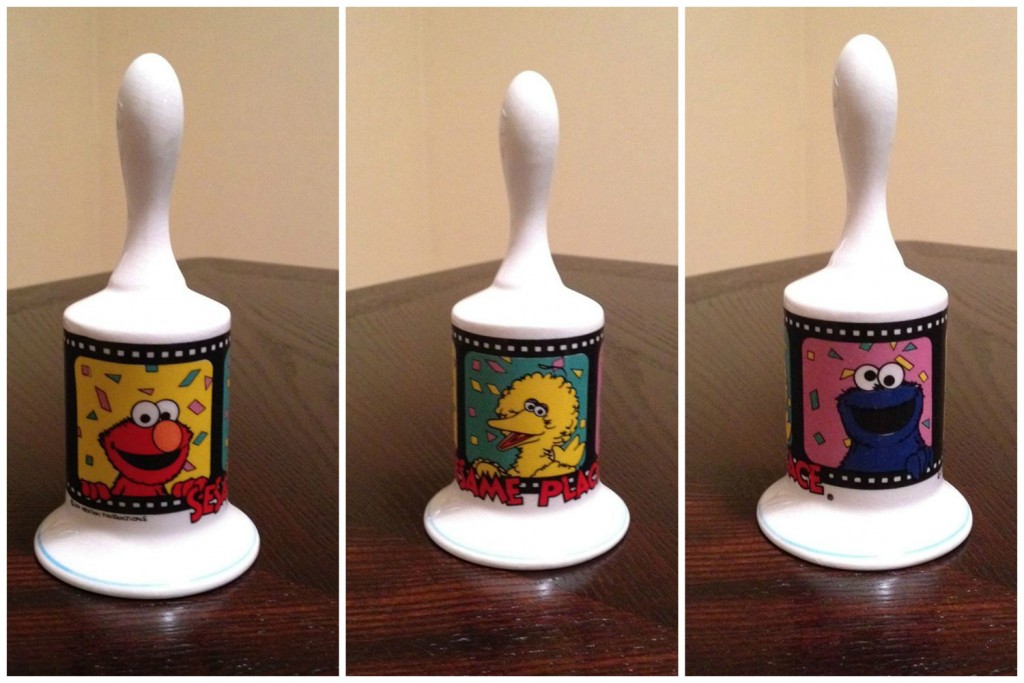 This bell, shown from all angles to show all the character portraits, is branded with the Sesame Place “dancing letters” logo. This bell is perfect for ‘ringing for the maid’ as you sit in your spooky castle counting everything you can see. 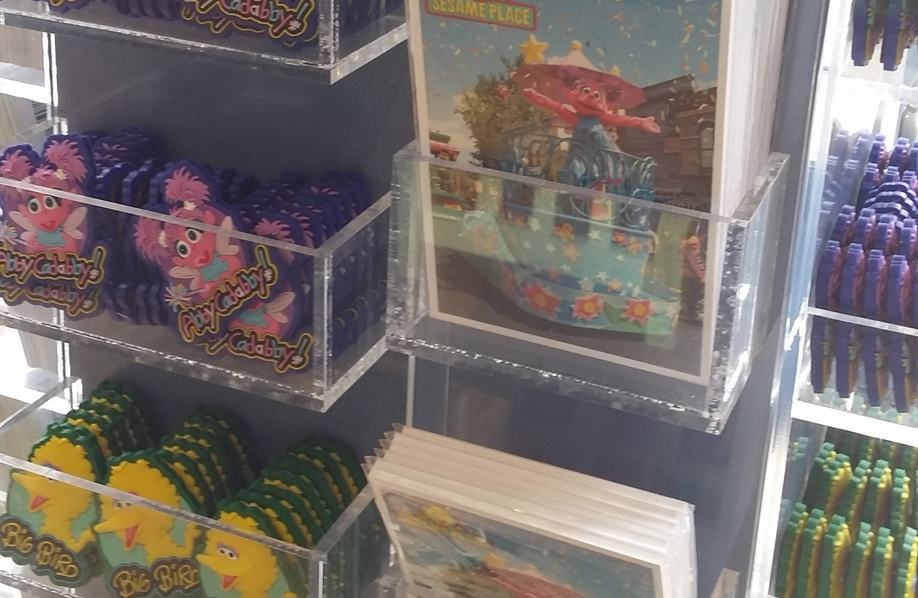 Here is just a small section of the display of post cards and magnets. There are many of these types of items available at Sesame Place. Some feature the Sesame Place logo, some feature the Sesame Street logo or no logo. You can choose from a variety of coffee mugs, cell phone cases, sunglasses, etc to have more Abby Cadabby in your life. You know you need more Abby Cadabby in your life. 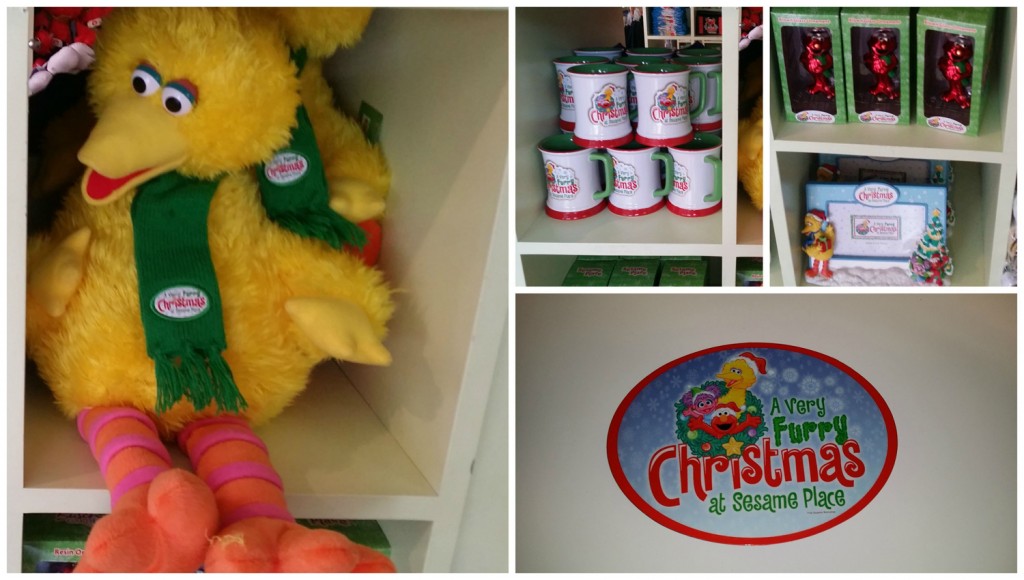 Since 2011, Sesame Place remains open until the very end of the year to celebrate A Very Furry Christmas. Merchandise branded with the event logo is available all year round at Mr. Hooper’s Emporium including ornaments, frames, and coffee mugs. 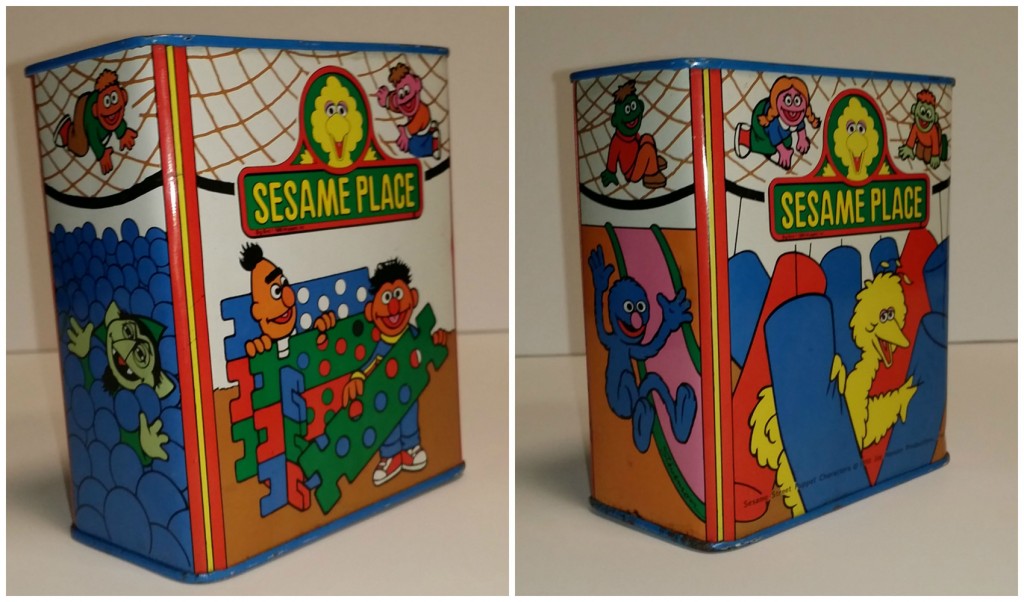 This is my favorite piece of merchandise because of the custom Sesame Place art. Readers of Sesame Place will recognize these opening day ‘play elements’ drawn on this bank: Monster Maze, Nets and Climbs, The Count’s Ballroom, Sesame Slab Slides, and The Sesame Construction Company. It’s neat that little details, like the colors of the slide and the shape of the construction blocks, were done accurately. All of these play elements were removed by the end of 2013. 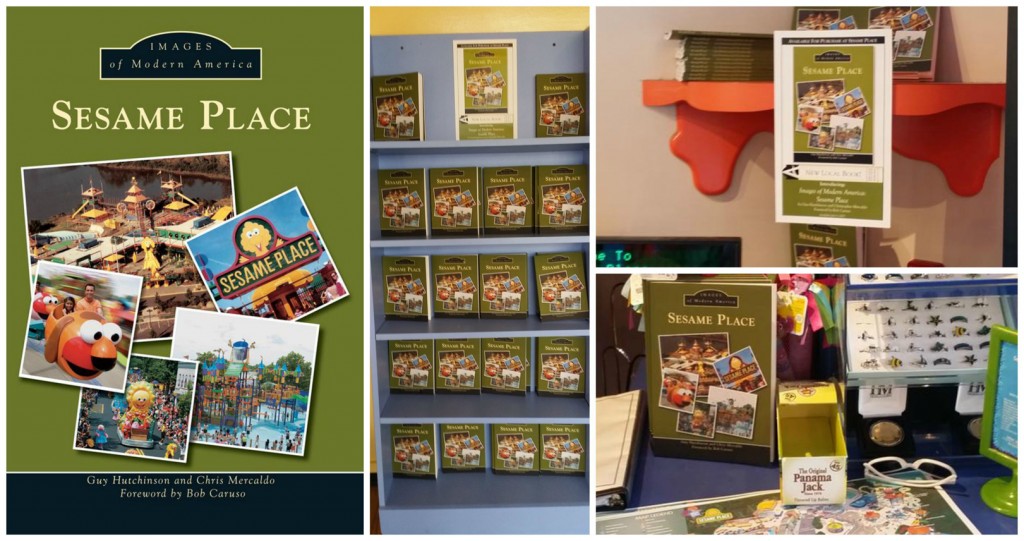 The book I co-authored on Sesame Place is available at the gift shops throughout the park including a large display at the Emporium. Mr. Hooper is very supportive of the book.

This is just a very small sample of the stuff that you can get today, and in years past.

Suffice to say, if you like Sesame Street characters, this is the place to shop.

Click here to exit through the gift shop on the ToughPigs forum!

Sesame Place Week: Then vs. Now