Note: Since this news article was originally posted, the release date of the DVD has been pushed back from July 6 to July 13. 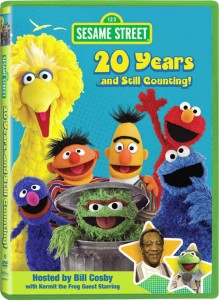 Can this really be true? Well, unless TVShowsonDVD.com is lying, it’s true — the 1989 special Sesame Street: 20 and Still Counting is coming to DVD from Lionsgate Entertainment on July 13th.

If you’ve seen the special before (or if you read about during Tough Pigs’ My Week with Sesame Anniversaries), you’ll know it’s a delightful little birthday party for the show. It was hosted by Bill Cosby, and features stuff like kids from the early days reuniting with Muppets, human cast members hanging out and reminiscing in Hooper’s Store, and Cosby making a funny face when Oscar yells at him.

And yet, for all its delightfulness, it just doesn’t seem like the kind of thing that would ever get released on DVD… It’s from a very specific moment in time, so there can’t be much nostalgic demand for it, and it’s not really educational at all. I don’t even know who owns the darn thing, as it’s a Sesame special originally produced by Jim Henson Productions.

But why look a gift DVD in the mouth? This news is a great surprise, and it seems to me it opens up a world of possibilities… like anything could come out on DVD now. Maybe the 25th anniversary special will be on DVD next year! Or the complete Larry and Phyllis! Well, probably not Larry and Phyllis. But still, if nothing else, this represents an opportunity to trade in our cruddy old tape-traded copies of the special for pristine new digital versions. Yay, DVDs!

Thanks to Tough Pigs’ own Jamie B for alerting us to this news! Click here to get excited about Placido Flamingo’s duet with Placido Domingo on the Tough Pigs forum!

Below the Frame Episode 5 – Snowed In