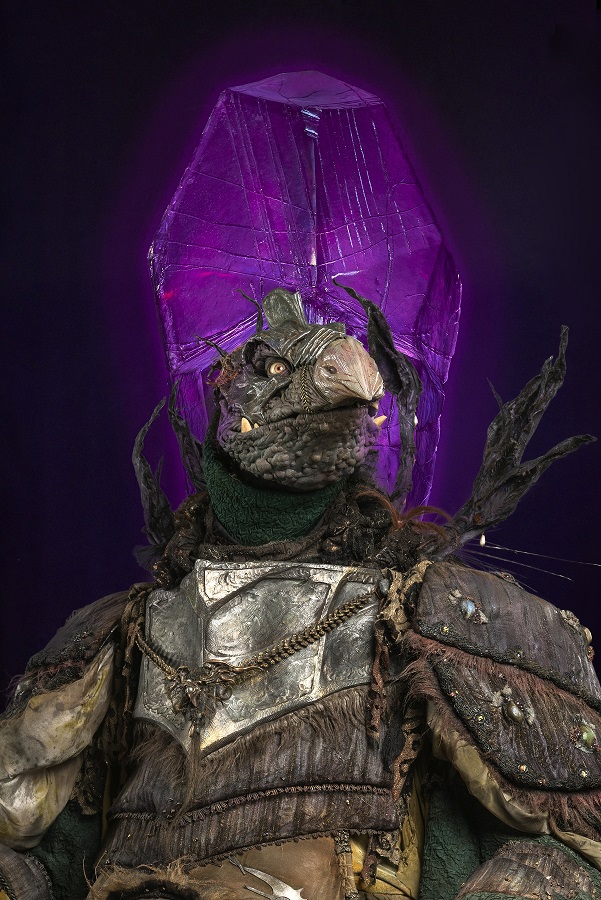 The Museum of the Moving Image is firmly established as an essential destination for Henson fans, with its permanent Jim Henson Exhibition and its regular screenings. For the next six months, fans of The Dark Crystal will have another reason to head to the museum, to check out the exhibition “Creatures from the Land of Thra: Character Design for The Dark Crystal: Age of Resistance.”

It’s a relatively small exhibition, but it’s packed with great stuff from behind the scenes of the Netflix Age of Resistance series. A small screening room shows clips from Age of Resistance so you can see the finished product, while the artifacts on display include early character sketches, maquettes used by builders to realize the puppets in three dimensions, and a handful of actual puppets used in production. If you have the capacity to stand inches away from the Hunter Skeksis and not feel awed and a little bit frightened, you must be made of stone.

We went to check out the exhibition, and we talked to the Museum of the Moving Image’s curator of collections Barbara Miller to get the scoop on how it all came together. 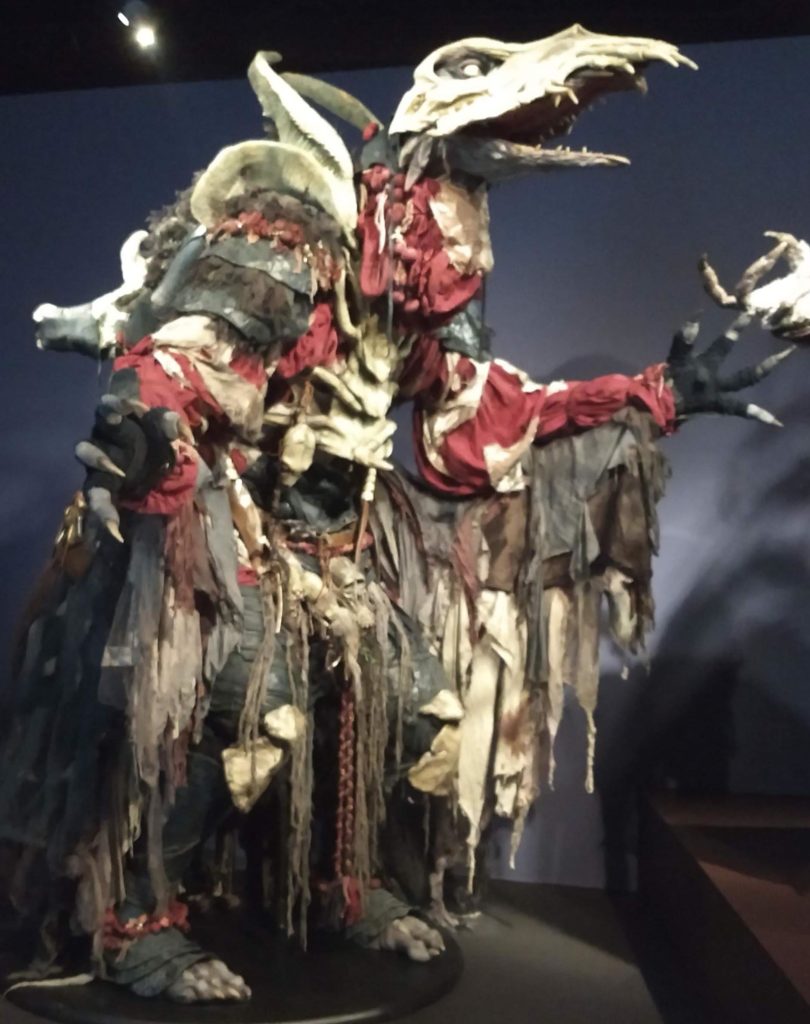 Tough Pigs: How did this exhibition come about? Was it the museum’s idea, Henson’s idea…?

Museum of the Moving Image: You know, it’s funny, we have such a close relationship now, so it was more of a question for each of us: “Are we going to do something?”

TP: They knew the series was happening pretty far in advance, it sounds like.

MOMI: Right, and we have a strong relationship with Netflix as well. We’ve worked with them on a number of projects, so all the stars sort of aligned in a way. Netflix, they’re great partners, they like to promote the work that they’re doing, but we’ve worked with them on a couple of other projects and they’re sort of hands-off in a sense. They trust their media partners. 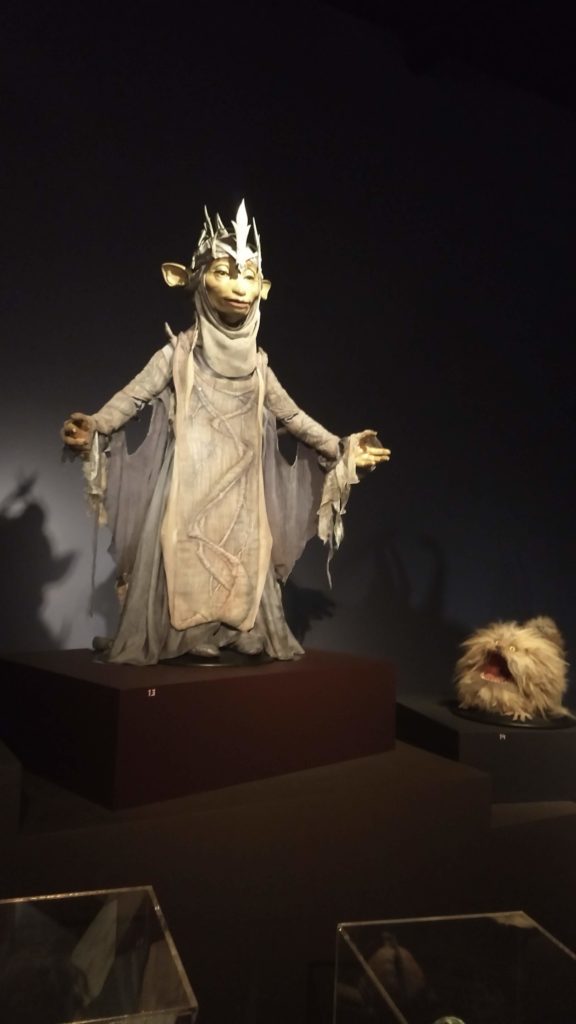 TP: So that’s good for you.

MOMI: It’s good for us, yeah. It was them saying “Great, you want to tell this story,” and we were sort of left to do what we do, which is tell stories for our visitors. It just made sense all the way around. I think we’d been talking for a long time: “When the series comes to pass, we’ll do something,” and then it was upon us, so we worked closely with the people at Netflix and obviously with the Creature Shop and Karen Falk at the Henson archives. It’s a series that’s ongoing – hopefully, there will be a season two…

TP: Right. Are they going to want this stuff back to start the next season?

TP: I see what you mean, just looking at the characters that are represented here.

MOMI: Yeah, exactly. The good news is that for us, we always like to tell stories about process. Obviously, they didn’t need the maquettes anymore, because they were for puppet building. And those are gorgeous. Come to the Museum of the Moving Image and see these maquettes, because they are so beautiful! The first time I saw them here in this space, I almost started to cry. They’re so gorgeous, and so lovingly rendered. They’re really magical, and capture the essence of the characters as they appear in the series.

TP: I would be remiss if I didn’t say “No pun intended.” 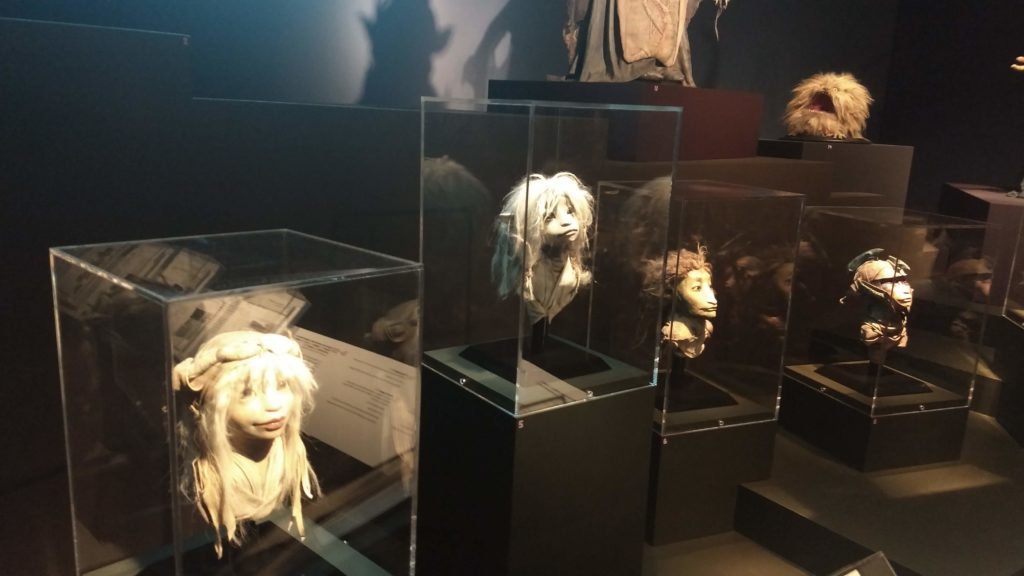 MOMI: So the maquettes they didn’t need anymore, and there are sketches from two separate sketchbooks that belong to Peter Brook, who is the creative supervisor at the Creature Shop in LA. He did a sketch of Deet that we have on exhibit here, and also a sketch of how the puppeteers work the Skeksis puppet.

TP: It seems like the basic idea is to show every step of the process from brainstorming to finished puppet.

MOMI: I don’t know if it’s every step, but they’re elements of the character design process. We start with the beautiful concept art by Brian Froud, and it was important to us to anchor this whole thing in his sketches and give them pride of place. The interesting thing for us – and this is nerding out a little bit maybe, on a museum level – but for us this story was really cool, because Brian made these sketches in England where he lives, and they’re beautifully colored original artwork. But what they worked on at the Creature Shop was not the original artwork. They worked on the jpegs that came from a PhotoShop file. Wendy Froud took Brian’s art and scanned them into PhotoShop and took different views of the same character, did titling, and sort of made these digital files.

MOMI: Exactly. Then Wendy sent them off as digital files to the Creature Shop, where they were used by the fabricators to do their work. We’re exhibiting them as digital files [displayed on a screen], because this is what they use. This is part of the process. Usually, such things are reproductions, but we’re not thinking of them as reproductions because they’re the thing.

TP: Right, they were this thing at this point in the process. 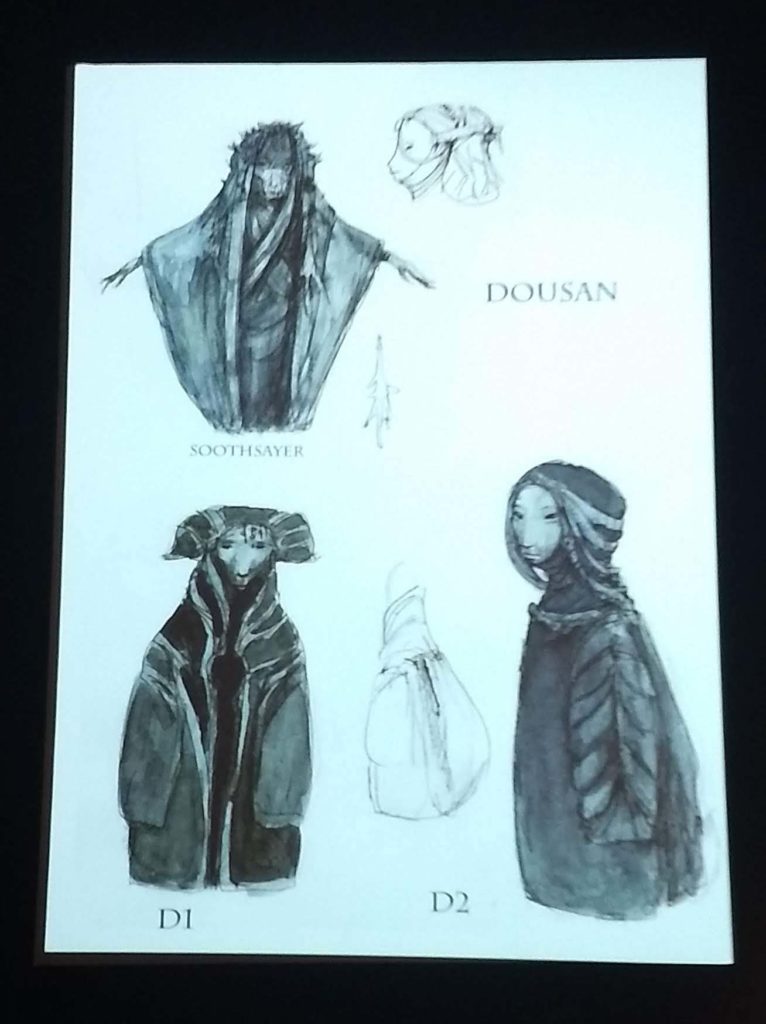 MOMI: Right, so we’re excited about that. And also just being able to show the work of the designers and builders at the shop, both in Los Angeles and London. As we do here, we like to honor the creative process and really show the work behind the scenes.

TP: So some of this stuff was actually shipped over from London?

MOMI: The short answer is yes. Most of it is from LA. The maquettes never left LA, a lot of the puppets were built in LA, and a few of them were built in London. They were still building when the series went into production, so they had to open a shop in London. Most of them were built in LA. Also, an essential part of this – Brian Froud, in addition to sketching the characters, he designed the concepts for the costumes, and we also wanted to represent the costume design process. We have pages from binders that were compiled by the Creature Shop with samples of costume elements from each character.

TP: Those were for reference, if they needed to make another costume?

MOMI: Exactly. We have a page for the General, and Seladon, and Hup, and Aughra, and the Gruenaks… I think that’s really cool, because it shows that amount of detail.

TP: And that’s the kind of detail most people probably wouldn’t think about, but it has to happen.

MOMI: Yeah. Then we have these beautiful finished puppets. We have the All-Maudra, we have creepy Seladon in her Skeksis outfit, we have a Fizzgig that’s not Baffi…

TP: Right, I noticed this one doesn’t have an eyepatch.

MOMI: Yes, another Fizzgig… and the Hunter and the General Skeksis. 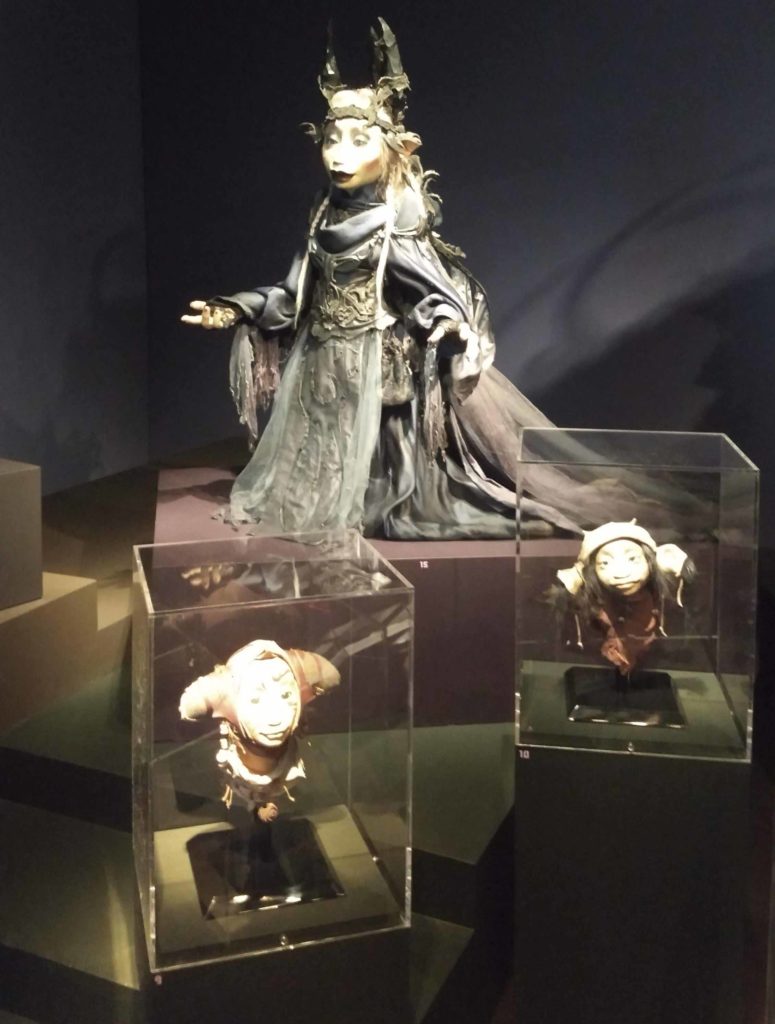 TP: On the museum’s part, did this come a little easier having already prepared Henson puppets for display in the past?

MOMI: These came to us pretty much ready to go. We had the talent of Jason Weber from the New York Creature Shop to come in and fine-tune the posing for us, which we also had for our exhibition. We’ve definitely acquired our own knowledge, but they’re on hand to do the finishing touches. 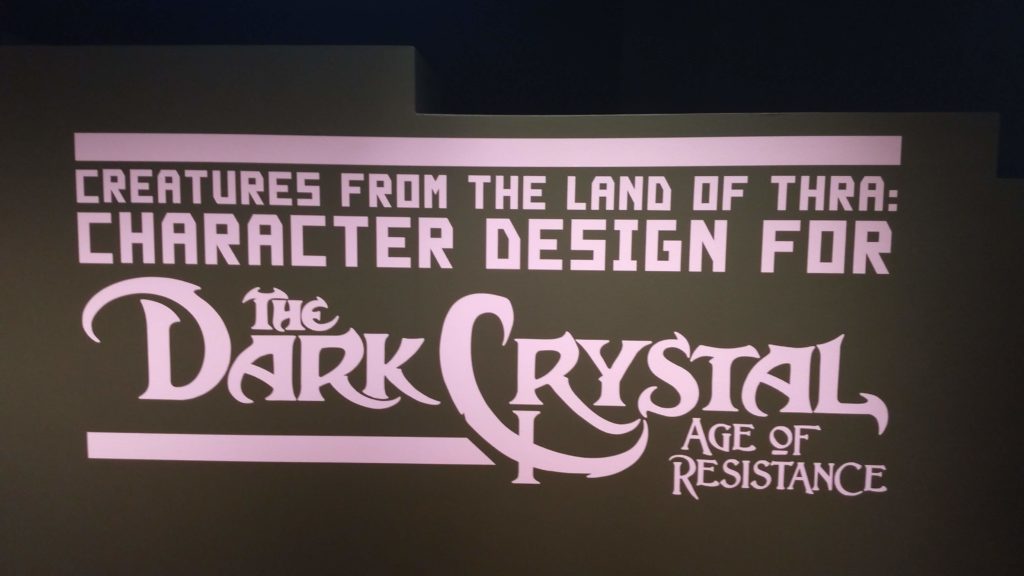 “Creatures from the Land of Thra” is open through February 23, 2020. If you’re a fan of The Dark Crystal: Age of Resistance and you’re going to be anywhere near NYC in that time, make sure you hop on a Landstrider and head over the Museum of the Moving Image to see this stuff with your own two eyes! Or, if you’re Aughra, with your own one eye.

Special thanks to the Museum of the Moving Image! Click here to nerd out on a museum level on the Tough Pigs forum!