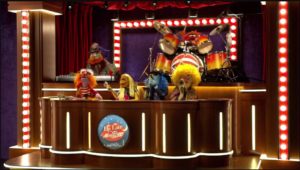 According to a recent (100% unverified) report from The Disinsider, the Muppets will be premiering a series of shorts on the Disney+ streaming service. The site claims that these segments will be less than ten minutes long, will film in June 2019, and will include “a game show, a cooking show, and a talk show.”

That’s right, it looks like the Muppets might be revisiting all of their greatest and most successful ventures. A talk show, just like Up Late With Miss Piggy! A cooking show, just like Muppets Kitchen with Cat Cora! And a game show, just like that time they lost to the Dixie Chicks on Family Feud!

As more information about this project is released (along with, hopefully, confirmation from Disney that it really exists), we’ll share it!

Click here to hope for a whole new crop of memorable characters like Denise, Chef Angelo, and Mo Frackle on the Tough Pigs Forum.

Some Old Muppet Titles Will Apparently Be on Disney+