Every year, we here at ToughPigs get overly excited about the holidays.  It’s not just because Christmas is a magical time of year (which it is) or because we get a few days off from work (which we do) or because our homes are overflowing with baked goods (heck yeah!).  It’s because nobody does Christmas like the Muppets.

We’ve already talked at length about the best and worst Muppet Christmas specials, so this year we’re focusing on the music.  Read on to see what Muppet holiday songs each of the ToughPigs writers chose as their favorites!

My favorite Muppet Christmas song would have to be “It Feels Like Christmas” from The Muppet Christmas Carol. In the span of two minutes and forty-two seconds, it manages to sum up concisely exactly why I love this holiday so much… and I’m Jewish! Christmas is more than just a holiday; it’s a feeling of warmth, love, good cheer, kindness and generosity. The smile on someone’s face when you’ve given them the perfect gift. The music that fills the air and leaves you humming long after it’s over. The closeness we feel when surrounded by friends and loved ones. The message of love and peace on Earth that we all wish for. That’s what Christmas is to me, and if we listen to our better angels and let this message into our hearts, we can keep that feeling around throughout the year. Paul Williams managed to explain this so eloquently in the song that you can feel the love pouring out of it. Plus, you can do the “Bus Driver Dance” like Michael Caine does in the movie, which makes it even more fun.

Anthony Strand
Keep Christmas With You

One could easily argue that “Keep Christmas With You” isn’t really a Muppet Christmas song, because the best-known version of it is the one from Christmas Eve on Sesame Street, where it’s sung (and signed) by only humans, including Bob, Linda, and a roomful of laid-back 1970s children. But that occurred on Sesame Street – and if you ask me, the Sesame humans count as honorary Muppets – so I’m going with it. For me, “Keep” is the perfect expression of the longing we feel for Christmas when it isn’t December yet, and the holiday-shaped hole in our hearts when January rolls around. I’m a huge Christmas fan, so I think about that a lot. Every time I do, I start singing this song – it’s the only Christmas music I allow outside of December, because it’s the only one that makes any sense.

Louie Pearlman
When the River Meets the Sea

One of the most beautiful and uplifting songs in the Henson musical cannon, “When The River Meets The Sea” was written by master Muppet songwriter Paul Williams for 1977’s HBO special Emmet Otter’s Jugband Christmas. It has since appeared on William’s album A Little On The Windy Side, as a duet between John Denver and Robin in John Denver and The Muppets: A Christmas Together, and sung by Robin, Kermit and Jimmy Fallon on his show Late Night With Jimmy Fallon in the Christmas season of 2012.

The song was also performed by Jerry Nelson and Louise Gold at Jim’s memorial service in 1990, proving what a meaningful song it was for him. This is understandable. Although the lyrics of the song are not holiday related, they discuss concepts of the life-cycle and the peaceful transition from life to death. What a great song to be performed at what Henson specifically requested to be a celebration of his life, not a somber ceremony to express grief over his death.

As we gather with our families over the holidays, it’s natural to think about the bigger questions about the way the physical and spiritual world intertwine and our place within them both, which is why this particular song is a favorite of mine. By using the traditional structure of a religious spiritual, Williams suggests that the song is much older than it actually is and that it was something sung by the denizens of Emmet Otter’s world long before he was in it.

“When The River Meets The Sea” offers some wide-eyed looks at the nature of the world and mortality, through lines such as “Like a baby when it is sleeping in its loving mother’s arms/what a newborn baby dreams is a mystery.” and “Though our minds be filled with questions, in our hearts we’ll understand/when the river meets the sea.” These are beautiful passages that embody the wonder and spirit of a lot of Muppet and Henson projects just as well as upbeat songs like “Rainbow Connection” or the contemplative “Bein’ Green,” but in a more gentle and moving package. It’s a song worth listening to this time of year, or anytime that you’re pondering the wonder of life and the world around us.

Evan G.
Room in Your Heart

True story: When I first got iTunes in high school, “Room in Your Heart” was my most-played song for months. Apparently, teenage me didn’t want to listen to the Beatles or the Rolling Stones, just Bunsen and Beaker. Though this song was deleted from the final version of The Muppet Christmas Carol, it’s adorable and very catchy, with a sweet message about caring and togetherness that reaches beyond the holiday season. I love Bunsen’s singing voice, which we hear so rarely, and any song that includes the lyrics “Start dancing, Beaker!” is an A+ in my book. Let this song into your heart. You’ll be glad you did.

Here’s the dark secret about “Jingle Bell Rock.” It does not rock. At all. Okay, maybe it did in the 50s, but today the original recording comes across more like “Jingle Bell Leisurely Stroll.” But you know who made it actually rock?  Dr. Teeth and the Electric Mayhem.

Their performance in A Muppet Family Christmas is a super-highlight of a special lousy with highlights, and it allows the song to finally live up to its full potential. I love the way Floyd sings “pick up your feet,” I love Animal’s concluding exclamation “THAT’S THE JINGLE BELL ROCK!” And I love seeing Kermit and Robin’s little dance moves as they take it all in. They’re not even mad that the Mayhem interrupted their sappy duet of “Jingle Bells.” Which reminds me — that fakeout of cutting to the band after the frogs sing just two lines of their song? I love that too.

Julia Gaskill
My Best Christmas Yet

After searching my heart, I had to accept the inevitable truth: I do not have a favorite Muppet Christmas song. For me, the choice is impossible. There are literally dozens of wonderfully festive songs littered throughout the Muppet catalogue that are impossible not to listen to on repeat every holiday season. Since I figured most of my obvious favorites might be snagged for this round table write-up, I decided to pick a song that does not get enough love. The song “My Best Christmas Yet” from A Muppets Christmas: Letters to Santa is a way underappreciated song (I mean, so is the rest of that soundtrack, but we already knew I felt this way, yes?). Besides being an incredibly catchy song and featuring almost the entirety of the Muppet gang, “My Best Christmas Yet” has such a lovely message to it. It’s all about the coming together of family and friends – how there’s no grander feeling than gathering with the ones you love most to reflect and be thankful. It’s a heartwarming piece, but would we expect any less from a song written by Paul Williams himself?

My favorite Muppet Christmas songs have mostly been claimed and written about earlier in this article already, and thankfully I’m not forced to choose a dud like Mr. Willowby‘s “The Perfect Tree” or a non-Christmassy song like Emmet Otter‘s “Riverbottom Nightmare Band.”  Instead, I’m going to break my own rule for this Roundtable feature and choose two songs, because my love and respect for them is only described in tandem.

The Muppet Christmas Carol is filled with wonderful songs, two of which are “Scrooge” and “A Thankful Heart”.  Now, both of these are truly great on their own, but neither can hold up to some of the previously mentioned songs in this Roundtable.  However, with a little context, the connection is just as strong as any “It Feels Like Christmas”.  Moreso, maybe.

In our 2013 interview with songwriter Paul Williams, he revealed to us his inspiration for both songs.  “Scrooge” was how he saw himself while deep into his drug and alcohol addiction, and “A Thankful Heart” is about his gratitude for his sobriety.  There’s something beautiful in that.  Amongst all the “Joy to the World” and “Peace on Earth” we hear during the holidays, there’s a deeply personal story about suffering and redemption, adding another layer of thankfulness to the holidays.  This gives me a thankful heart too, because Muppet Christmas Carol allowed for the genius of Paul Williams to return to the world of the Muppets with a healthy mind, body, and soul. 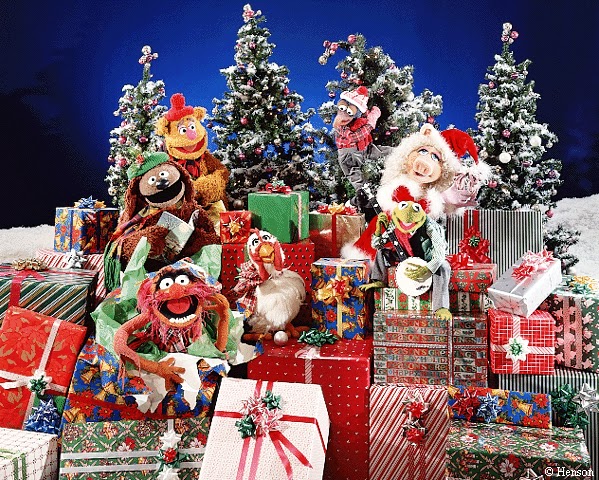 What are some of your favorite Muppet Christmas songs?  Let us know, and be sure to listen to as many as you can this holiday season, and all through the year!

Click here to make room in your heart for the ToughPigs forum!