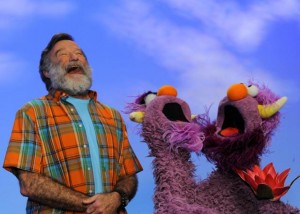 It saddens us to learn that comedian, actor, and TV and film icon Robin Williams has passed away at the age of 63.  Whether you discovered him through his standup, Mork and Mindy, Mrs. Doubtfire, Night at the Museum, Good Morning Vietnam, Popeye, Good Will Hunting, Aladdin, or any number of his many roles, his humor and his performances have touched us all throughout his entire career.

Robin Williams crossed paths with the Muppets a few times.  He was chosen as the very first celebrity to grace the cover of Muppet Magazine. In another issue, he was given the great honor of being named an “Honorary Muppet”, alongside the likes of Dolly Parton and Pee Wee Herman.  In an issue of the Muppet Show Newsletter, it was announced that Williams would appear on The Muppet Show, although he never did, and we’re all the worse off for it.

Robin Williams also made several appearances on Sesame Street, talking about his feet, or a stick, or baseball, or how the Two-Headed Monster can solve a conflict.  You can view most of his appearances below. 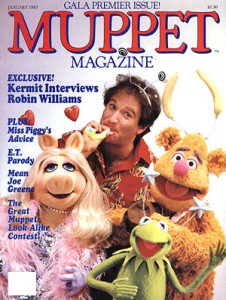 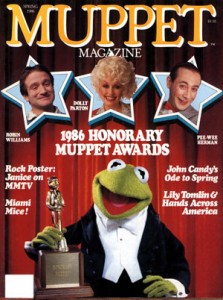 Click here to help us remember Robin Williams on the ToughPigs forum!