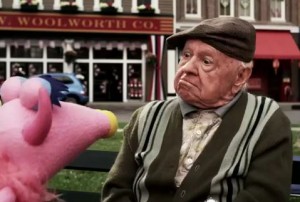 Legendary actor Mickey Rooney, who has been appearing in films, television, and stage for almost 90 years, has passed away.

We remember Mickey Rooney from his brief, musical cameo in 2011’s The Muppets.  He was the old guy in “Life’s a Happy Song” who sang “When there’s someone by your side to sing” while turning his cap sideways.  Yeah, you know that guy.

His son, Michael Rooney, served as The Muppets‘s choreographer, which may explain how Mickey got the gig.  Aside from his being really famous already.

He also had hundreds of other credits, which you should peruse and remember at your leisure.

Click here to help us remember Mickey Rooney on the ToughPigs forum!