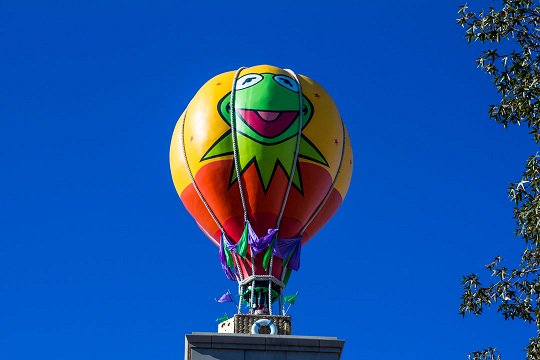 It’s been an exciting time for Muppet stuff at Walt Disney World. New attractions, restaurants, and experiences featuring the Muppets had been popping up all over the park, and we started to get a little spoiled. Time to bring our heads out of the clouds, as our balloons are getting popped.

We have just learned that the iconic hot air balloon featuring Kermit’s face will be taken down from the Muppets Courtyard at Walt Disney World’s Hollywood Studios. The change is being made because of the expansion of Star Wars Land, and the fact that the balloon is too visible from the area, thus taking something away from the fact that people might not actually think they’re on Tatooine? Or something?

As of right now, we don’t know if there are plans to relocate the balloon or if it will just be retired. We’re holding out hope that it will be replaced with something awesome, although maybe not quite as high (as to keep from offending the Star Wars fans).

For those of you visiting Disney World in the near future: The hot air balloon will be up for just a few more weeks.

Click here to feel deflated on the ToughPigs forum!