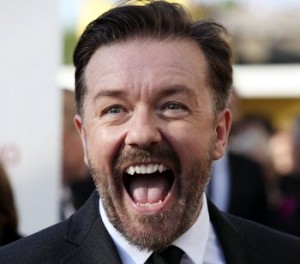 The Muppets… Again co-star Ricky Gervais was a guest on radio’s Christian O’Connell Breakfast Show recently, and he was bursting with enthusiasm for his current movie gig.

Also of note: He mentions filming with Christoph Waltz, confirming the long-held speculation that Waltz will still be in the movie despite not playing a starring role.

If this embedding thingy works, you should be able to listen to the whole segment here:

listen to ‘Christian O’Connell with Ricky Gervais’ on Audioboo

Did the thingy work? If not, try this link.

Thanks to Tough Pigs’ own Barry for the alert! Click here to make a scene with Christoph Waltz on the Tough Pigs forum!