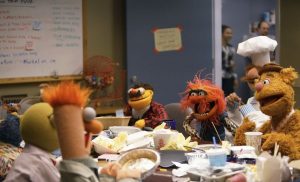 There’s a scene in episode 11 of The Muppets that will immediately call to mind in many Muppet fans a scene from The Muppets Take Manhattan. It’s a scene that many of us have quoted time and time again, usually whenever we have some strong opinions about the current state of the Muppets franchise, when a movie or television show or special is pretty close to what the essence of the Muppets is but not quite there. A suggestion that Muppet fans of various obsessive levels have thought about since The Muppets premiered in September. In the movie, as Kermit is ready to go onstage for their Broadway debut, he’s asked if some animal friends can watch the play from backstage. His response is perfectly Kermit and encapsulates his all-inclusive attitude when it comes to the Muppet troupe.

“What? No! No, they cannot watch the show from backstage. That’s it! That’s what’s been missing from the show! That’s what we need! More frogs and dogs and bears and chickens and… and whatever! You’re not gonna watch the show, you’re gonna be in the show! Come on, everyone!”

So when Kristin Newman replaced Bob Kushell as the showrunner of The Muppets, I saw many people posting this quote, hoping it would be heard, trying to let the new Executive Producer know that while we love the show – and I do! I adore the first ten episodes of this first season. Some more than others, of course, but that’s what a first season is all about, working out the kinks – but while we love the show, there was something missing. Something not quite there yet. It was a show that could be performed with humans in all of the roles and not lose much. Which is fine, if you want a show starring humans. Not so much if you want a show starring Muppets. You want zaniness. You want chaos bubbling just below the surface. You want to see Lew Zealand throw a fish once in a while, not just get coffee in the background. You want humor mixed with affection and heart. In short, you want joy. And so does Kristin Newman. From her interview with The Hollywood Reporter: 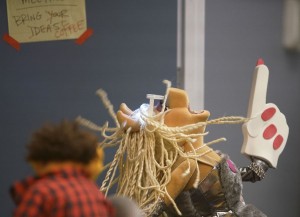 “[M]ostly it’s the spirit I’m looking to for inspiration: joy and friendship; Muppets take care of each other; Muppets root for each other, even if Muppets drive each other crazy and get in each other’s way. Muppets, at the end of the day, love each other. So that’s what I try to make every single decision based on. I walked into the writers’ room on my first day and wrote the word “joy” on the wall. That’s what I’m trying to make every decision based on. What’s the most joyful moment we can have here? What’s the most fun we can have here? Let’s let them do what humans can’t do because they’re puppets and they’re silly. Just because they live in a human world doesn’t mean they have to act like humans. Let’s enjoy and play with what they can do.”

So heading into the newest episode – the “reboot” episode, if you will, and you should because everyone else is and that’s a fine enough word for it – there were some high expectations. How much would change, and would it be for better or for worse? I can confidently say that these updates are the best possible thing the show could have done and have made a show I love even more lovable.

The episode begins with everyone coming back from a hiatus (meta) and feeling rejuvenated and ready to make a great show (also meta). We soon learn that the head of the network, Lucy Royce as played by the wonderful June Diane Raphael, isn’t happy that the show the Muppets are making, Up Late with Miss Piggy, is doing as well as the network had hoped and wants to see things improve (so very meta). And so we’re introduced to the series’ new villain, replacing their old villain, Miss Piggy, who never really should have been seen as the villain in the first place. (To the show’s credit, they’re fixing this upfront – figuratively. The theme song’s new title sequence, in which Miss Piggy hands a cup of coffee to an exasperated Kermit, lets you know straight away that we’re coming back from break with a gentler Piggy.) Enter Utkarsh Ambudkar as Pizza (pronounced Pache, naturally), a branding expert who has some big ideas to breathe new life into the show (both the show-within-the-show and the show itself which we are watching – have I mentioned how meta this episode is?). After consulting with Key & Peele, Piggy is worried that if they don’t do everything Pizza says, their show will suffer the same fate – shedoink, cancelled! Following an intense brainstorming session, the Muppets break the tension by being … well, Muppety. And that’s what inspires Kermit to do what the show (and the show-within-the-show) should’ve done from the beginning – be its Muppetational self. 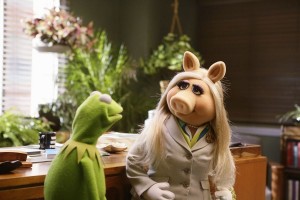 “Piggy, we have everything we need right here. We don’t need any of Pizza’s slick outside elements. We need more of this. We’ll just make our friends more part of the show!”

So the big question is – does it work? Absolutely. Lucy loves the new ideas which Pizza naturally steals credit for in true sitcom villain fashion, and they are very funny ideas that would be at home on Fallon or Kimmel. Pizza calls them quaint and cute, but the truth is that these are updated versions of Muppet ideas are modern and classic at the same time, making them perfect for this show.

The other big change that Newman brought about was that she wanted to bring back was the dynamic of Kermit and Piggy – not necessarily bringing them back together, at least not right away, but showing their affection for one another. “The heart of the whole franchise has always been Piggy and Kermit, and I think breaking them up was really smart. There’s always more story to be told and more tension when two people who love each other are apart instead of together. But what’s important to remember is that they do love each other,” she said. So it’s not a big surprise that by episode’s end, Kermit and Denise are taking some time apart to figure things out. There needs to be a work/life balance, and Kermit has not been doing well at that at all.

The straw that breaks Denise’s back is Kermit making his first formal appearance on Up Late by doing a duet of “an old corny number” with Miss Piggy, a “happy little song that we used to do back in the day,” as Kermit says. In reality, the song is “In Spite of Ourselves,” from the John Prine album of the same name. The song isn’t all that old (the album was released in 1999) and it is much more foul-mouthed in its entirety. Look up the full lyrics and you can see that there was some clever editing of the song before it got to the Muppets to make it more friendly to a wider audience. And really, that’s the best metaphor I can think of for this new “reboot” of The Muppets. Smart, funny writers are taking adult tones and themes and ideas that have worked for one audience and adapting them for a wider one so that everyone can sit down together and feel the joy. And what a true joy this episode was. 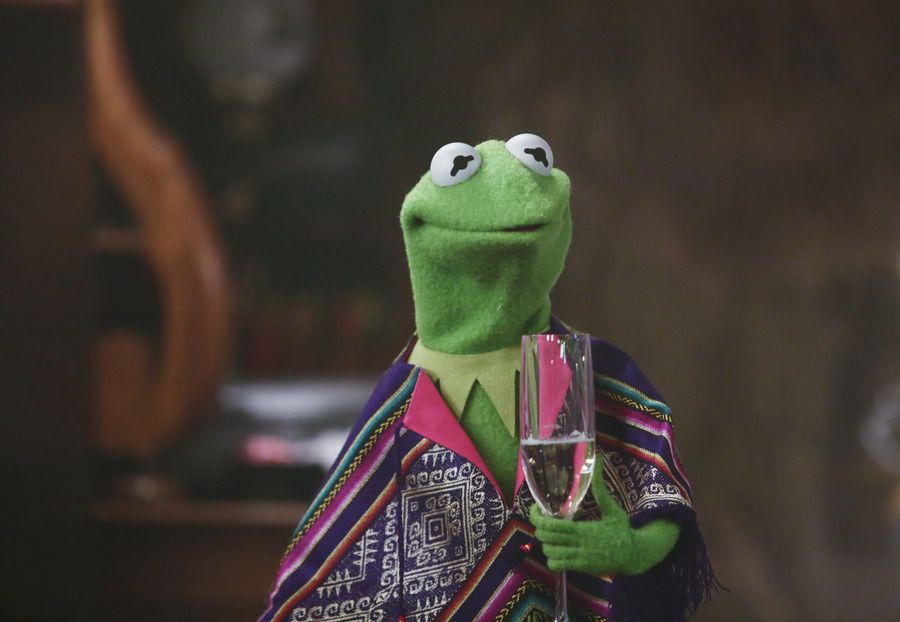 Best Joke: Scooter’s improv exchange with Deadly killed me. It’s nice to see how much Scooter is branching out in activities, and without relying explicitly on any Mom or Ken jokes.

Lamest Joke: I wasn’t crazy about “Pablo isn’t a name!,” especially since she just came back from Argentina. But that’s nitpicky.

Best One-Liner: Uncle Deadly: “She thinks she can speak Spanish now. It’s a nightmare … a nightmare!”

Missed Opportunity: Folks, I think SO highly of this episode that picking something that needs work is nearly impossible, so I’m gonna be an absolute nitpicker and say … I dunno, that Animal thinking his muffin has Siri should’ve been an apple instead. That’s it. That’s the only “improvement” I’d make.

Best Puppetry Moment: Kermit playing the banjo isn’t a new technique, but I love seeing his fingers plucking every single time they do it. Great job, Mike Quinn!

MVP (Most Valuable Puppeteer): Bill Barretta is this week’s MVP to me. Pepe and Bobo were heading up the revamped Up Late segments, and Bobo’s delivery of just about everything always gets me. In addition, all the hard work he’s putting in behind the scenes as a producer to help revamp the show should be praised and thanked.

MVM (Most Valuable Muppet): I’m giving this one to the big guy – Kermit. He had to carry a lot on his shoulders this week, between revamping the show-within-the-show and being the stand-in for the real-life producers revamping the actual show, going through a break-up and most likely starting a wonderful self-actualization arc that should be a blast to watch, and his little banjo-picking fingers were front and center on T.V. by episode’s end. Kudos, Mr. the Frog!

Best Guest(s): Keegan Michael Key and Jordan Peele killed it. Going forward, the producers have said that guest stars will serve more as cameos rather than driving the plot itself, and seeing it work this well has convinced me that it should be a great decision.

Adultiest Content: Pepe tying with himself this week, alluding to sleeping with his Uber passenger as well as whatever happened with Rizzo in Amsterdam. Pepe’s a horn dog and I kinda like the lean-in on that.

One More Thing: Gender really is fluid, h’okay? Gloria Estefan’s certainly was. Different characters refer to Gloria as “he” and “she.” As much as I really want to see more female characters introduced as regulars, I liked Gloria’s ambiguity.

Okay, One More One More Thing: A big shout-out to Utkarsh Ambudkar and June Diane Raphael for adding to the ranks of humans who work extremely well with Muppets. They’re a fantastic addition, each bringing something different and fun to the table, and I can’t wait to see more of them going forward. 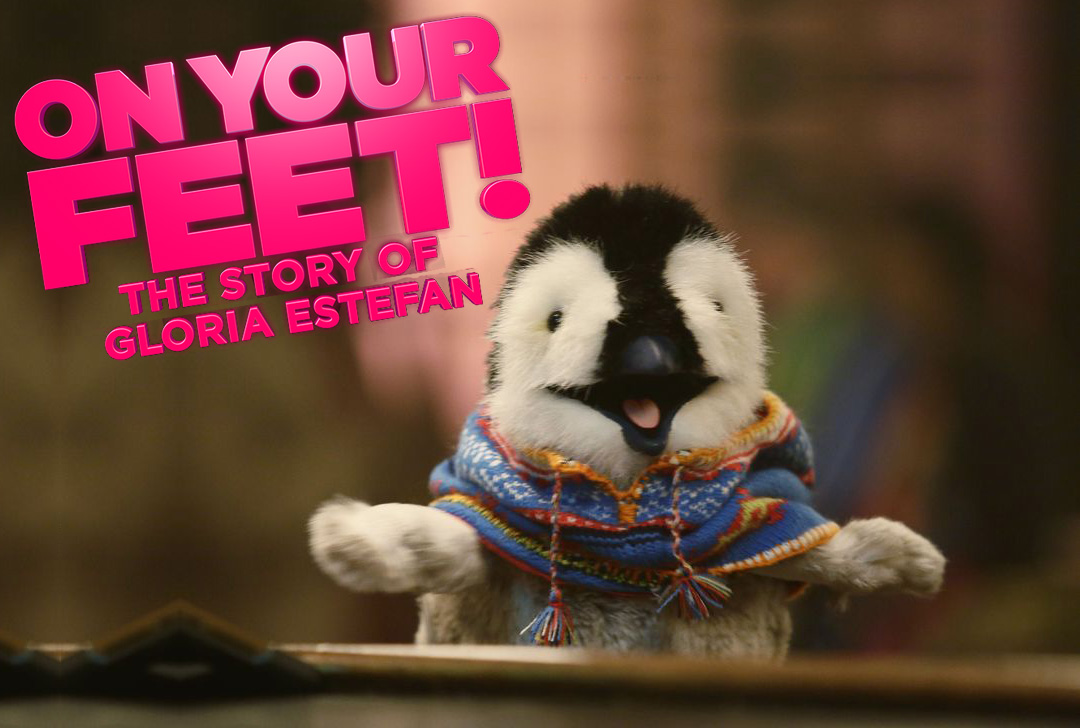 Click here to go full meta on the ToughPigs forum!