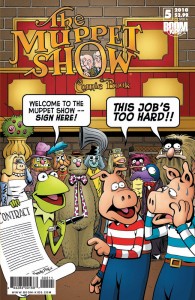 When we found out which characters would be featured in Boom! Studios’ The Muppet Show Comic Book #5, written by Roger Langridge and drawn by Amy Mebberson, Tough Pigs forum regular Chris “Smig” Smigliano said, “I hope Langridge knows what he’s doing.”

Are there any Muppets more widely unpopular among the fans than Andy and Randy? My own opinion has wavered on Miss Piggy’s dim-witted nephews since they showed up on Muppets Tonight… When the show first aired, I was still in my “It’s Muppets, therefore it must be good” era of fandom, so I just accepted them, but on revisiting the series as an older, wiser, more jaded grown-up, I decided they were just plain obnoxious. This seems to be the general consensus. And yet, when I’ve re-rewatched some of their Muppets Tonight moments even more recently, I’ll confess they’ve made me smile a time or two. If nothing else, I have to admire the writers for their dedication to their apparent goal of creating the stupidest television characters ever.

And now here they are in The Muppet Show Comic Book, as it reaches its very first #5 issue. And I can honestly say that Langridge captures the voice of the pig brothers perfectly… but whether that’s a good thing will depend on your own personal level of tolerance. 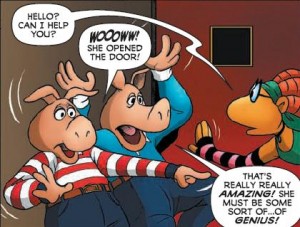 When a misunderstanding with their Aunt Piggy results in a week-long trip to the Muppet Theater, Kermit allows Andy and Randy to help out with some small tasks, and they’re integrated into some of the onstage acts, including a nifty and concise Swedish Chef bit. Other acts in issue 5 include a song by Bobby Benson’s Baby Band and a visit to the planet Koozebane. One highlight of the issue is a page that demonstrates exactly how Andy and Randy manage to screw things up when they try to help various Muppets. Throughout the issue, Piggy gets increasingly annoyed by her nephews, until finally… well, actually, there’s not really a resolution, but the ending is still amusing.

Skeeter’s still around, and it’s a pretty unusual moment when we witness a grown-up version of a Muppet Babies character interacting with two Muppets Tonight characters on the set of The Muppet Show. I can only assume her actions in the issue will have consequences next issue, so that should be fun to watch. 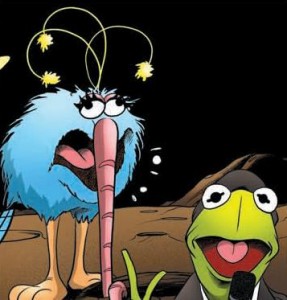 The surprise characters have overshadowed the other aspects of this “Family Reunion” storyline, but so far these two issues have had some of the most consistently solid work in the Muppet Show comic’s history. Langridge is really in the groove now, and Mebberson’s art is lovely once again… In this issue, Mebberson has Piggy do a thing with her face that the Piggy puppet does to express a certain emotion, but which I’ve never seen any other illustrator capture.

Muppet Wiki tells me the next comic book arc after issue 6 will be the monster-themed “Muppet Mash,” and while I’m sure that’ll be lots of fun, I wouldn’t mind a few more issues of “Family Reunion.” There are still plenty of Muppet relatives to choose from. But who knows? Maybe down the road we’ll get a “Family Reunion 2,” and we’ll finally get to see Johnny Fiama’s Ma in comic book form.

Click here to join us in speculating which Muppet relative will show up next issue, on the Tough Pigs forum!