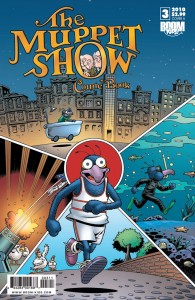 With #3, we reach the end of the “On the Road” storyline. While it seems a bit premature that this issue sees the Muppets making a triumphant(?) return to their newly rebuilt theater after only two issues on the titular road, I’d say this is the best installment of the storyline and one of the best issues so far.

The roadshow gimmick was fun, but The Muppet Show really works best when it looks like The Muppet Show, so the reintroduction of the theater setting is a welcome development. All of the onstage act bits work, from a “Muppet Labs” that recalls a classic Muppet Show episode, to a “Pigs in Space” that proves once again Langridge’s skill for taking advantage of the comic book format in ways that seem perfectly suited to the Muppets. Say, has there been a “Pigs in Space” in every issue so far? I’ve lost track. 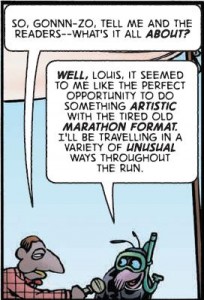 There are two ongoing bits as well — one involving Gonzo, as you might guess from the cover, and another involving Fozzie’s return to the Muppet troupe after setting off on his own during earlier “On the Road” issues. This Fozzie story is the issue’s only weak point. When a large crate shows up at the theater addressed to Fozzie, it’s incredibly easy to guess what’s inside, and there’s no attempt at a twist or a surprise ending to the storyline. You’d think there would at least be some physical comedy, with the crate getting pushed down stairs or sat on by a monster, or exploded, but nothing so exciting ever happens.

But that only takes up a couple of pages, and as I said, this is still an exceptionally good issue overall, with the character moments and musical numbers and watermelons flying through the air that we’ve come to expect from this series, so it’s a delightful conclusion to this storyline. And the closing number is particularly satisfying. Next issue begins the “Family Reunion” storyline, which we don’t know much about, so that should be exciting. Who do you think is family reunited? 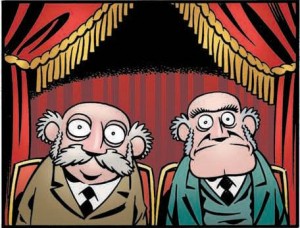 Click here to escape the Quantum Vortex on the Tough Pigs forum!