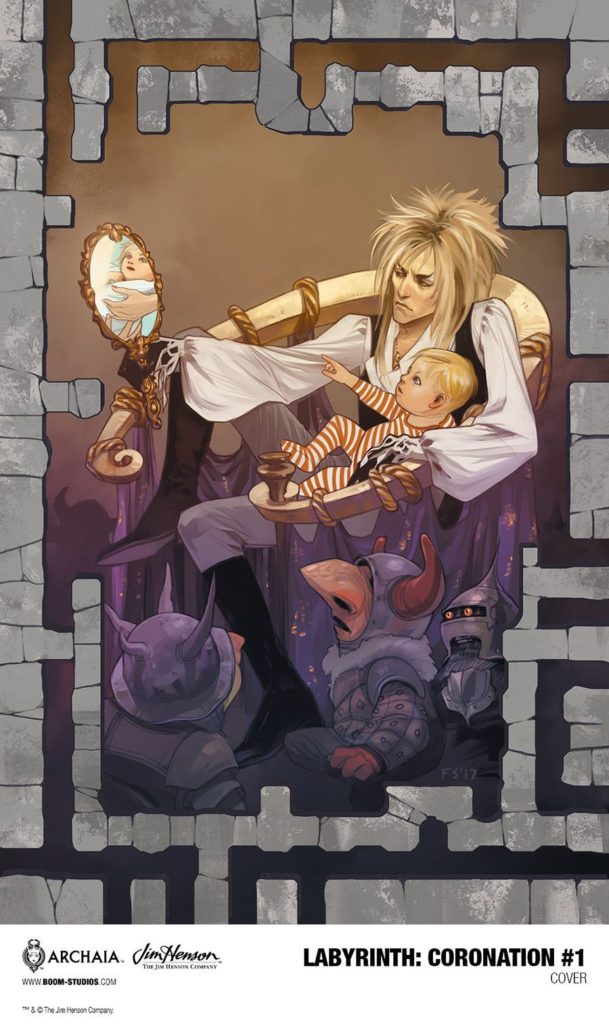 You could tell a story about Sarah after her adventure in the Labyrinth. But that would be pretty boring… unless she went back into the Labyrinth. But why would she do that, after she got her brother Toby back? Besides, there was already a Return to Labyrinth manga in 2006.

You could tell a story about one of the creatures Sarah met in the Labyrinth. There have been a few short comics stories featuring Ludo, the Worm and their friends over the years… but could any of them really serve as the focus of a long-form series? I don’t think anyone wants to read twelve issues about the old man with the bird on his head. (Yes, I know. Your instinct is to say “I would TOTALLY read that series!” But you wouldn’t.)

If you really think about it for any length of time, there’s only one Labyrinth character guaranteed to sell comics, and that’s David Bowie’s character, Jareth the Goblin King. He’s the first thing anyone thinks about when they think about Labyrinth. (Sure, they might specifically think about David Bowie’s… something-or-other. But that still counts.) Jareth is one of those characters that just sticks with people.

Okay, then. A comic book series about Jareth. So exactly what story will it tell? Here’s the answer Alicia Archaia and Fred the Jim Henson Company came up with: It’s his origin story. It’s the story of how Jareth ended up in the Labyrinth in the first place, and how he became the Goblin King.

It must be so tempting to tell origin stories for established, beloved characters who don’t already have them. Unfortunately, the results are not guaranteed. The ’00s movie adaptations of How the Grinch Stole Christmas and Charlie and the Chocolate Factory both attempted to provide origin stories for larger-than-life characters (the Grinch and Willy Wonka, respectively), and both of them were real stinkeroos. I don’t want to know why the Grinch is so cranky, I just want to watch him steal Christmas! I don’t want to know why Willy Wonka so enamored of chocolate, I just want to watch him torture badly-behaved children!

But here’s the smart thing about Labyrinth: Coronation, the series: As early as the third page of the first issue, we get permission to believe that none of what we’re reading is what “really” happened, if that’s what we feel like believing. The series features a framing sequence that takes place during the timeline of the movie, in which Jareth is telling baby Toby a bedtime story, and he prefaces the whole thing with a disclaimer: “goblins care far more for tales than truths.” Later, a goblin named Beetleglum will tell Toby that Jareth is “kinda putting his own spin” on the details of the story. How much spin? We can only guess, which is for the best. 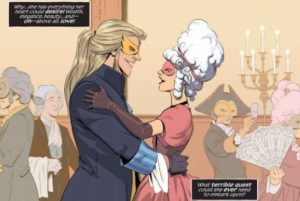 Jareth’s tale begins in 1797 Venice, with a countess named Maria and her dashing husband attending a masked ball. The count has an abundance of hair, an air of confidence, and killer eyebrows. Naturally, I assumed this was Jareth in his pre-Labyrinth days. But I was wrong! Although we will soon learn that this dude is haunted by the whispers of goblins, his name is Albert, which is much less cool than “Jareth.”  Albert is not the protagonist of this story.

Albert and Maria have a baby. Yep, it’s li’l Jareth! Cute little Baby Bowie! Or… is it? As soon as the present-day Jareth raises the possibility, he casts doubt on it. I mean, it’s probably Jareth. But who knows? Maybe the baby will turn out to be George Lucas, and this is the story of how he grew up and time-traveled to the 20th century and became the producer of the motion picture Labyrinth. But it’s probably Jareth.

Either way, before the end of issue #1, something bad happens to Baby (Probably-)Jareth, and as Maria becomes determined to rescue him, it becomes clear that she’s our true protagonist.  We also get our first glimpses of the Labyrinth in the past, and we meet its previous king, who is pretty scary in a more traditional fairy tale villain kind of way than the guy who sang “Dancing in the Streets” with Mick Jagger. Then issue #2 drops Maria into the Labyrinth, where she begins a journey not unlike Sarah’s, and meets a few appropriately strange beings. 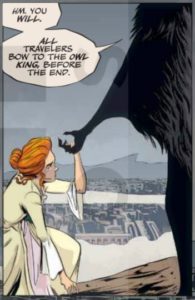 Simon Spurrier is writing the series, and although we haven’t seen much of his version of the world inside the Labyrinth yet, he’s writing an interesting story with enough connections to the characters we know without getting too cute with movie references. (I chuckled when Beetleglum commented on the “sing-along” happening at the castle. So the characters actually perceive the musical numbers as musical numbers?) Setting the bulk of the story in the past was a good idea, I think — it allows Spurrier to tell a story that feels like it’s that same world, but by limiting the “screen time” of the movie characters, it’s less likely that fans will cry “the door knockers would never say that!” and so on.

Daniel Bayliss, the artist, doesn’t really draw Jareth and Sarah to look like David Bowie and Jennifer Connelly, but that’s okay, and probably by design. His goblins look like goblins, and it’s not hard to imagine his renditions of the various other beasts as Creature Shop creations. There’s one two-page spread in issue #2 that’s particularly cool and has me looking forward to what else Bayliss will do with the strange and twisty world of the Labyrinth.

Of course, the very premise of the story raises some questions. Wasn’t it pretty strongly suggested at the end of the movie that everything took place in Sarah’s imagination? If that’s the case, Jareth is just a creation of Sarah’s mind, so how could he have been alive two centuries before she was born? If Sarah is imagining her trip through the Labyrinth, is she also imagining Jareth telling this entire 12-issue comic book series to Toby? That’s some imagination she has!

Or maybe I just shouldn’t think about it too much. I guess comic book publishers care more for tales than truths, too. Anyway, Labyrinth: Coronation is off to an intriguing start, and I’m looking forward to getting to know Maria a little better, and seeing if Spurrier & Bayliss and company can successfully recreate the tone of the film.

Labyrinth: Coronation issues 1 and 2 are out now! Check your local comic book shop, or get the digital editions from Comixology or Amazon! Issue 3 will be released on April 25!

Click here to have killer eyebrows on the Tough Pigs forum! 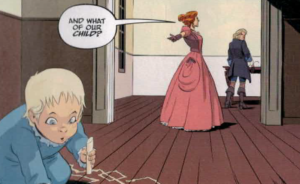