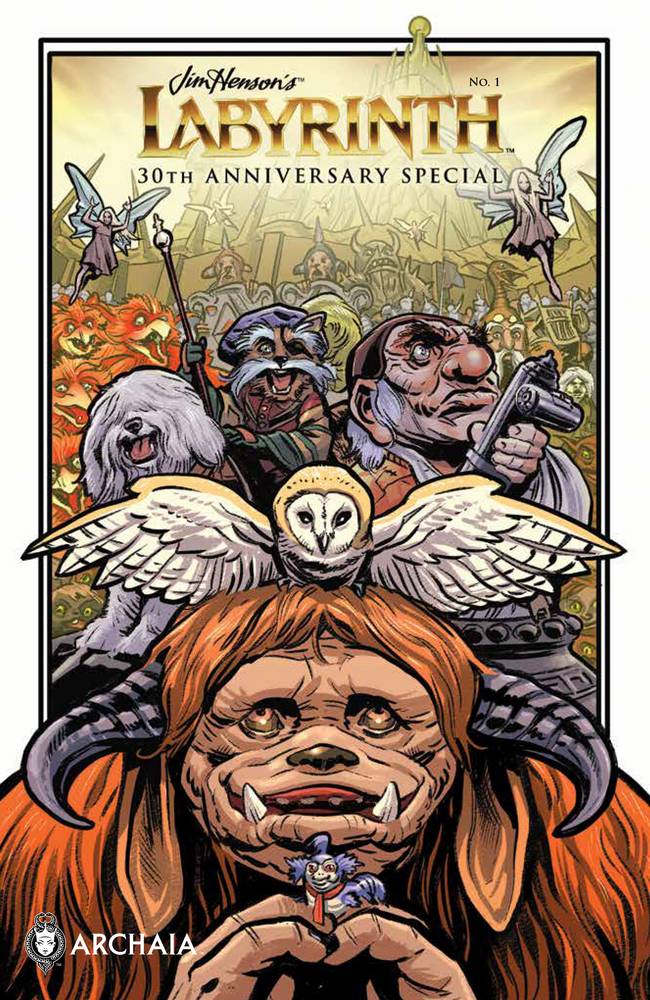 Comic book publisher Archaia has been the best friend of The Jim Henson Company for a while, and it’s easy to see why.  In a world where Henson isn’t quite as active in creating new puppet films as they used to, the comic books pull off the double-whammy of giving us stories with inventive characters and a deep respect for the properties that Jim Henson personally worked on.

Now that we’ve seen them tackle the expanded worlds of Fraggle Rock and The Dark Crystal, as well as lost Henson stories Tale of Sand and Turkey Hollow, it seemed like Labyrinth was a glaring omission from their library.  Of course, that’s not entirely true, as Archaia has been including short stories based on the world of Labyrinth in their Free Comic Book Day offerings from the past few years.  But the promise of more has always been the tagline to those stories, and we’ve been waiting a long time for Archaia to deliver on that promise.

As you might imagine, I’m the sort of collector who needs every scrap of merchandise that might have the most tangential connection to Jim Henson, so I’ve been hoarding my Archaia FCBD issues, knowing that they might be the only place I’d be able to revisit these stories.  Of course, because there are only 24 hours in a day and not the 9,000 I’d need to consume all of the media I’d like, I don’t think I’ve ever found the time to dig those comics out of their box.  What I really wanted was for Archaia to combine them all into one easy-to-digest book that I could keep on my shelf, lend to friends, and read over and over again.

So yeah, that’s exactly what happened.

In stores right now is Labyrinth 30th Anniversary Special, a graphic novel that contains all of the existing Labyrinth short stories, plus a few new ones.  Expanding on a story so close to Jim Henson’s legacy is tricky business.  The writers and artists have the difficult task of paying homage without disturbing the existing film, creating something new without changing anything old, and surprising their readers while providing something innately familiar.  And in the seven short stories, the talent checked off all the aforementioned criteria.

Featured in the seven stories are Ludo, Hoggle, and Sir Didymus, with prominent appearances by the Wiseman (and his hat), the Fireys, the Worm, and lots of Goblins.  Two characters you won’t see in this book are Sarah and Jareth (unless you prescribe to the theory that Jareth and the snow owl are one and the same), which is wise.  Labyrinth is so full with interesting characters, some of whom you only see in passing, that there’s an endless amount of storytelling to create around them.  Sarah and Jareth’s stories have been told, and pushing them any further risks doing that thing we talked about a minute ago where we risk damaging the sandcastle that Jim built. 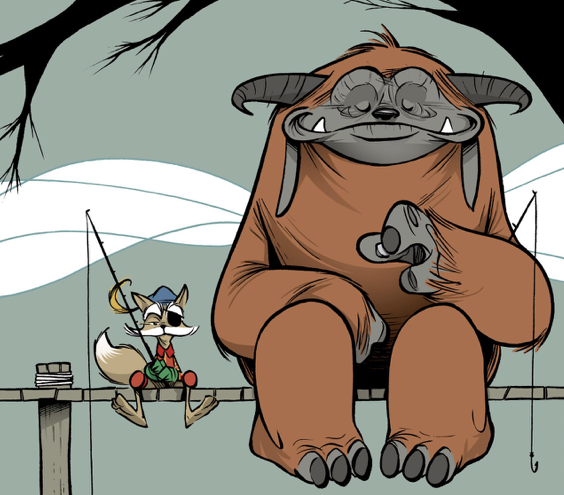 The Labyrinth is the sort of place where anything and everything happens, so what happens to our cast of characters after Sarah goes back home?  Hoggle, Ludo, and the rest go on living their lives, of course.  And that mundanity is what permeates over most of our stories, starting with the most charming one, “Gone Fishing” by Gustavo Duarte.  In this tale, Didymus and Ludo (beautifully illustrated to look like they’d be right at home in a Labyrinth animated TV show) sit on a dock at a lake.  Didymus with his fishing pole, and Ludo throwing rocks into the water.  The pair didn’t get nearly enough time to show off their unlikely bond in the film, so it’s wonderful to see them share a mini-adventure here, especially with a scene so seemingly commonplace, it would never fit into the film. 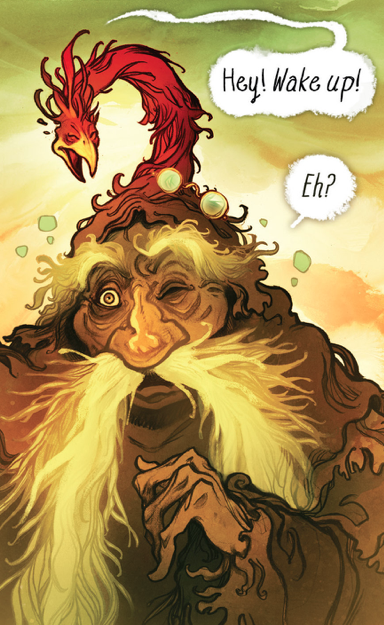 Labyrinth gives us just enough of a tease of other characters in its universe to make us wonder more about who they are.  The sleepy Wiseman and his sentient Hat star in “Wisdom & Idioms” by Cory Godbey.  Don’t you wonder why they’re sitting in the middle of the Labyrinth?  Or what sort of sage advice they’re known for giving?  Or what they’re doing with the donations inserted into their box?  Well, you won’t get any answers to those questions, but you do get to see more of their bickering!  And hey, nobody said these comics had to reveal the secret origins or backstories to any of these characters.  All we really want is more of what we saw in the movie, and Godbey handled that task with aplomb. 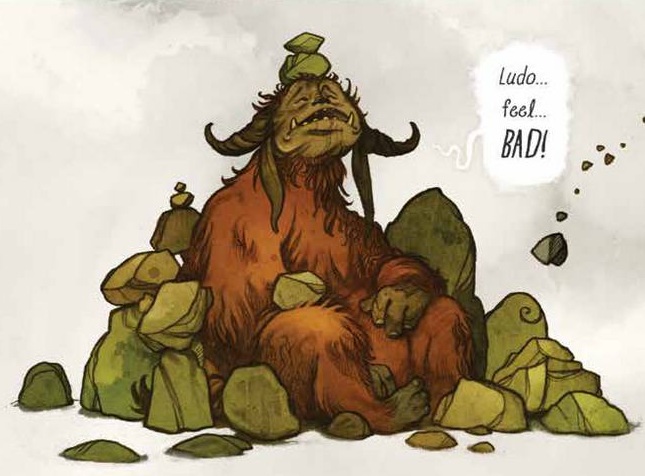 Cory Godbey provided the script and art for the next story as well, “Stone Cold”, starring an under-the-weather Ludo.  In this tale, Ludo is sick as a (giant, rock-loving) dog, and he interacts with all sorts of creatures from all around the Labyrinth looking for a remedy, including Hoggle, The Junk Lady, the stone-faced False Alarms, and the lying/truth-telling guards.  Although the story is pretty simple, this is a great example of showing off what an expanded Labyrinth story can be.  Without adding too much drama, we get the feeling that post-Sarah life for the citizens of the Labyrinth are much more cordial to each other and are able to transverse the Labyrinth without too much trouble, hinting that life normalizes, yet goes on for everyone after the defeat of the Goblin King.

The next story, “Rock Solid Friendship” (story by Adam Smith, art by Kyla Vanderklugt), is the only prequel story in this book.  It’s also a strange choice to follow the previous one, as it once again features Ludo interacting with various characters from around the Labyrinth.  “Rock Solid Friendship” shows us part of Ludo’s rivalry with the goblins, and how his friendship with the rocks began.  It’s definitely not a story that needed telling, but it’s charming, and I’m glad to have the chance to get to know the little-spoken Ludo a bit better. 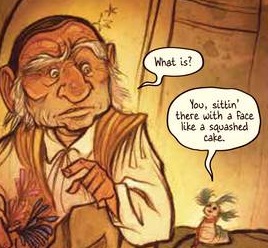 Hoggle and the Worm star in “Hoggle and the Worm” (however did they come up with that title??), written by Ted Naifeh and Adiranne Ambrose, illustrated by the ever-reliable Cory Godbey.  In this story, the eternal loner Hoggle seeks love, and he gets some advice from the married Worm (who, according to his off-panel wife, is named William).  Needless to say, the Worm’s tips almost inadvertently get Hoggle killed, which is among the worst things that can happen when trying to find a mate.  I’m really impressed with how both Hoggle and the Worm are written: Hoggle is ornery yet hopeful (and then ornery again), while the Worm is optimistic and a little ambivalent.  This is especially impressive in regards to the Worm, who is so beloved by fans, yet we only have a few seconds of screentime to spotlight his personality. 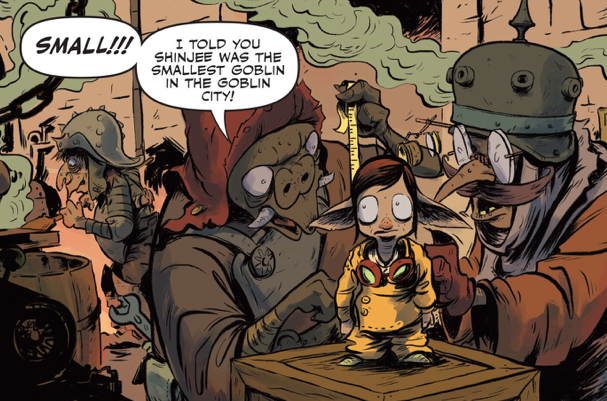 “Humongous Two” (script by Jonathan Case, art by Daniel Bayliss) may be my least favorite of the batch, possibly because it’s the only one that stars a character that didn’t originate in the Labyrinth film.  Shinjee is the smallest Goblin, and he’s tasked with being the new pilot of Humongous Two, the second version of the giant robot guard that stands at the gate to the Goblin City.  Because we don’t get to see any previously established characters (save for the large, dim-witted Goblin seen in the group that helps grant Sarah’s wish at the beginning of the film), it’s hard to care about what happens in the story.  And the story itself is pretty thin: Humongous Two is needed to help take down the rampaging, headless Humongous One; Shinjee proves that you can be small and tough; Humongous One is defeated; The End.  I could be down for a larger story about the Goblins, but only if we’re given more time and space for the writers and artists to establish the characters and the mostly alien environment.  As it is, this is the only skippable story in the entire book. 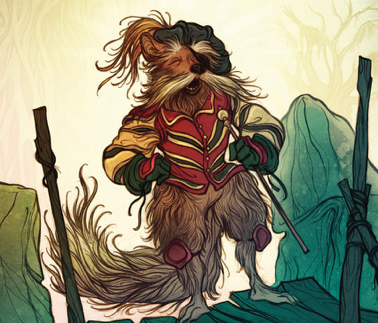 The final story is written and illustrated by (who else?) Cory Godbey, titled “Sir Didymus’ Grand Day”.  At absolutely no fault of Godbey or Archaia, this one suffers from not being a standalone comic among other Free Comic Book Day stories.  First, the original printing was in a square-shaped book, so adapting it into a normal-shaped comic leaves a lot of white space at the top and bottom of each page, which makes it look partly empty or missing content.  It also suffers from not being an actual story, but instead a slideshow of Didymus’ day interacting with other characters in the Labyrinth.  We’d already seen a few examples of that in this book, but with the added benefit of a narrative to tie it together.  That’s the sort of thing that works much better in a Free Comic Book Day issue where you just want to revisit these familiar characters and settings, and less so in a dedicated comic that’s already full of those things.  I still really enjoyed this story, though it’s a shame that the book ends on such a comparative “meh” note.

All in all, the Labyrinth comic is fun, respecting of the film’s legacy, and way easier to re-read than the individual Free Comic Book Day issues.  I also really appreciate the anthology format, which allows us to peek into their world without expecting anything to change or evolve.  I absolutely recommend this book to any and all of you Labyrinth lovers, and here’s hoping Archaia has plans to head back into the Labyrinth again soon! 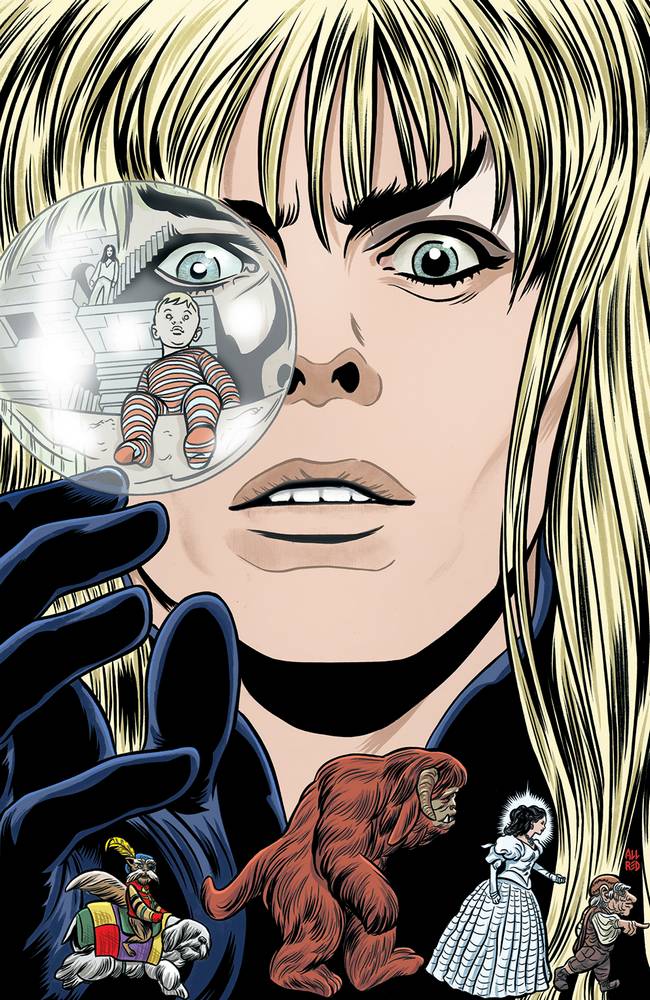 Click here to get lost in the ToughPigs forum!