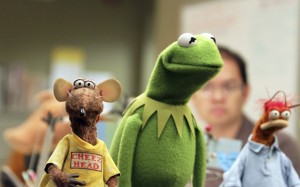 In their reviews of the first episode, many critics whose opinions I respect talked about how off-putting they find this portrayal of Kermit. Descriptions range from “borderline depressing” to “petulant” to “something of a manipulative prick.” All three of those reviewers – James Poniewozik, Alan Sepinwall, and Erik Adams – are Muppet fans who were excited to see them return to TV, so it would be unfair to dismiss them as the complaints of grumpy critics. If that many intelligent writers think that Kermit has gone sour, there must be something to what they’re saying.

So why don’t I see it at all? To me, this version of Kermit feels more like the character from The Muppet Show than he has in years. On The Muppet Show, Kermit displayed a range of emotions, including rage (the famous “You are fired, Piggy!” speech from the Loretta Swit episode), annoyance (“Good Grief, the Comedian’s a Bear”), and flippant sarcasm (“Actually, Sam, I’ve never known why you’re here” when Sam the Eagle is aghast at the idea of lady wrestlers).

For the first two decades after Steve Whitmire took over, Kermit was often a bland cipher. That’s improved in the recent movies, particularly Muppets Most Wanted, but here he seems even more fully-rounded. For the first time, this feels to me like Steve Whitmire is getting to play the same character as Jim Henson. He’s grumpy sometimes, but not to the degree that it overwhelms the rest of his character. It’s just one tool in his restocked arsenal. Let’s take a look at all of the sides of Kermit we get to see in this episode: 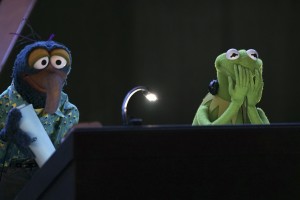 He’s proud of himself for running a smooth show: After getting Piggy and Josh Groban together, he boasts that “If they ever built an executive producer’s Hall of Fame, I think you’ll be entering through the Kermit the Frog Pavilion.” This is the Kermit who lets all of the craziness of his co-workers roll off his back. In that moment, he’s in control of his TV show and of the world around him.

More endearingly, he’s just plain excited about the improved work environment. His glee at the idea of being in a Code Green for the first time ever is so genuine. This is a frog who’s overjoyed about how his life is going, and it rubbed off on me as a viewer.

He gets overwhelmed, and he reacts in the most adorable way possible: “When I really need to clear my head, I get in my golf cart and tool around the lot. The speed limit’s 5 MPH, but I go 6 or 7, I don’t care.” This is one of my favorite flavors of Kermit – the helplessly square guy doing his best to cut loose. He knows that driving a golf cart over the speed limit isn’t a major transgression, but he’s going to make himself feel better by pretending it is.

He’s feisty, trying to hop over Josh Groban and break into Piggy’s dressing room. “Kermit getting into a physical altercation with Piggy’s new boyfriend” could easily have been awkward or uncomfortable, but instead it’s a just a silly gag where Kermit thumps against Josh’s chest. It’s a nice reminder that Kermit can be a physical comedian. 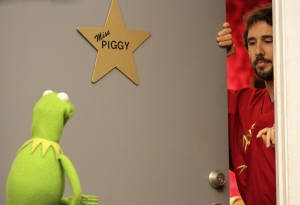 When he finally gets around to being grumpy, he’s no good at it. He starts out trying to insult Josh Groban – calling him evil and horrible – before it devolves into a string of compliments (“talented, velvet-throated piano god”). Even though he’s raw from the breakup, and he wants to be angry at Piggy – and mad at himself for setting them up – he’s still a decent guy who treats people fairly. He can’t help it. That’s who he is.

Finally, he knows his co-workers. He solves his problem by relying on his knowledge of Piggy, not by being cruel or playing any kind of a trick. By putting Josh Groban’s name above Piggy’s on the poster, all he does is reveal that Josh likes that idea, which offends Piggy. To me, that’s Kermit announcing “You two won’t work out in the long run, because you value different things.” Sure, he uses that knowledge to get what he wants out of his employees, but that’s nothing new. He’s done that a hundred times in the past.

All of these combine to suggest that Prady and the other writers have a good handle on what makes Kermit tick. They’ve modulated him slightly to make him the lead of a network series, but to me, he still feels like the Kermit of old. I can’t wait to see where they take him in the rest of the season

So that’s the Frog. A few notes about everyone else – 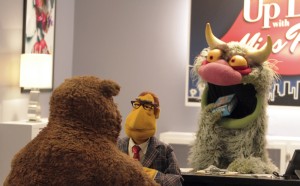 Best Joke: The Newsman getting angry about Bobo horning in his daughter’s Girl Scout Cookie territory, continuing to speak in his vintage announcer tone the whole time. That’s exactly the kind of “What are the Muppets like off-camera?” joke I hope we get more of going forward.

Lamest Joke: Fozzie’s “Are you kidding, you got Jay Leno all over my fur!” That’s a classic Fozzie-style bad joke, but an extremely corny one. In general, Fozzie’s storyline here is a step down from his storyline in the first one. That isn’t entirely because Jay Leno is no Riki Lindhome, although let’s be honest – Jay Leno is no Riki Lindhome. Mostly it just feels weird to me that Fozzie is confident enough to steal anything from anyone.

MVP (Muppet Valuable Player):  Pepe – who I don’t generally care for – is a standout here. The visual gag of him signing Sweetums’s birthday cards with all four hands is great, and his line about how quickly he can shower is even better.  But his best moment of the night has to be “It’s a stupid idea, but I love it. Because I love . . . love.” One of Bill Barretta’s best line readings in recent memory.

Best Guest Star: Laurence Fishburne makes the most of his brief cameo. It’s kind of an obvious joke, but thanks to ever-present gravitas of his voice – plus the evil glee all over his face – it’s hilarious. One of the biggest laughs of the episode for sure.

Song Watch: Ryan mentioned last week that singing was the one classic Muppet element missing from the premiere. That gets corrected here, as Josh Groban and Piggy fall in love while singing a duet of “If I Loved You” from Carousel. It’s a short bit, but the timing of the gag is great. It bodes well for future musical numbers.

Adultiest Content: Pepe’s line about gender fluidity. But like so many of the “adult” jokes here, that line will probably go over kids heads. Except for kids who are actually experiencing gender dysphoria, in which case they’ll probably appreciate the shoutout.

Best Job for an Old Muppet: Uncle Deadly only has a couple of brief scenes here, but it’s just delightful that he gets to be in charge of wardrobe. And it’s even more delightful that “Uncle Deadly, prominent character” doesn’t seem like a surprise at all. Five years ago, it would have been unthinkable.

One More Thing: Gonzo’s running joke about his mom’s whereabouts is a great example of a bit that only works because we know these characters. If this was the second episode of a typical sitcom, that would land with a thud. But because it’s our old oddball friend Gonzo – and because we get to hear Dave Goelz say “Kermit, you know my mother is a terrible goat rider” – it’s very funny. 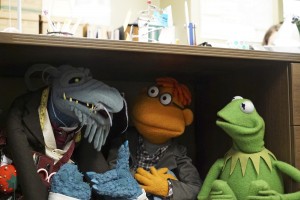 Click here to drive 6 or 7 miles per hour on the ToughPigs forum!