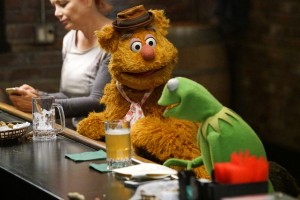 One of my favorite aspects of the Muppets has always been the friendship between Kermit the Frog and Fozzie Bear. Whether they’ve struggled to tell a single joke, moved right along, or had an emotional moment behind the Pechoolo Casino, there’s something about the dynamic between the confident, caring Kermit and the desperate-for-approval Fozzie that’s always interested me. Thankfully, that relationship is fully on display in this week’s episode, “Bear Left Then Bear Write.”

It starts with Kermit trying to avoid Fozzie as Fozzie is waiting on feedback for a sketch he wrote for the show. To no real Muppet fan’s surprise, Kermit thinks the sketch is terrible, but he doesn’t want to hurt Fozzie’s feelings. So when Fozzie finally corners the frog in his office, Kermit tells his friend (over drinks at Rowlf’s Tavern, which we finally see in the show for the first time) that his sketch is so good, it would work better as a movie. Kermit then digs himself further into a hole by saying that Fozzie is such a good writer, that he should write screenplays instead of ever writing anything for the show again. Now, I can buy that Kermit would give a little white lie to spare his best friend’s feelings, but this sort of came off as too much of a scheme to avoid having to read Fozzie’s work ever again. It felt a tad out-of-character, but that was really Kermit’s only flaw in the episode. 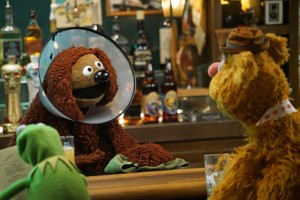 After that little lie, Kermit is shocked when Fozzie announces the next night that he’s leaving the show to be a full-time screenwriter. Naturally, Kermit sets out to tell Fozzie the truth, but he’s already on his way to Big Bear Lake so he can concentrate on writing. When Kermit finally breaks the news to him, Fozzie refuses to back down, saying that Kermit may not believe in him, but he believes in himself. I found this to be a refreshing change of pace for Fozzie, as he finally has the confidence that he rightly deserves. I’d like to see a little more of Fozzie being confident as the show continues, or at least enough confidence that it softens the blow when his jokes fall flat.

Kermit heads out to find Fozzie at Big Bear, where the sight of a bear freaks out campers and a park ranger hits Fozzie with a tranquilizer dart. (Obviously in the world of the show, bears face undue discrimination.) This leads to a hilarious sequence where Kermit reconciles with a heavily-drugged Fozzie as they stumble back to Fozzie’s car. It’s nice to see Kermit actually feel remorse for his lie and then ultimately set it right; this shows both a flawed Kermit and the good-natured leader we’ve all come to love. 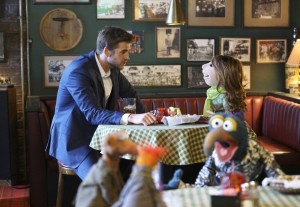 Our B-plot this week revolves around Gonzo as he attempts to date a woman named Debbie. But what Debbie doesn’t know is that Gonzo has been using pictures of Liam Hemsworth as his profile picture. Gonzo then uses Hemsworth (with the help of Rizzo and Pepe) as a way to court Debbie, but Hemsworth is so taken by her that he leaves them to continue the date with her elsewhere. I’m not so crazy about them using the same character-does-something-immoral-then-tries-to-sneak-out-of-it-only-for-it-to-blow-up-in-their-face bit like they did with Fozzie and Jay Leno last week, but what really irks me is how we’ve heard nothing about what happened between Gonzo and Camilla. Forget Kermit and Piggy, I want my favorite weirdo-and-poultry supercouple back together again!

And if that wasn’t enough for a half-hour, when Christina Applegate brings an embarrassing clip of Miss Piggy onto Up Late, Piggy seeks revenge by making an embarrassing video of Applegate. Of course, this doesn’t work, and Piggy is arrested for spying on her. It was a simple C-plot that was a tad predictable, but still fun. It does feel a bit strange to see Piggy arrested for something she actually did, though, given we all know how her 1981 arrest for Grand Theft Necklace went.

Overall, there were some bumps in the road, but there’s still enough compelling material to show that The Muppets is still on the right track. Hopefully, it gets even better in the weeks to come. 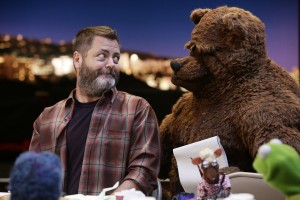 Best Joke: Hearing a drugged-up Fozzie pronounce “brothers.” Whether it’s Baymax from Big Hero 6 or Kenneth the Page from 30 Rock, here is just something about seeing a character slightly out of it that cracks me up.

Recycled Pilot Joke Alert: Rowlf finally showed up in this episode, and they brought back the joke about Rowlf’s head in a cone because he kept biting his stitches. Maybe it would’ve been funnier if we hadn’t seen the pilot, but now that we have, the joke just falls flat.

Missed Opportunity: With Gonzo’s storyline this week being about lying about his appearance, I was really hoping for a catfishing joke with Lew Zealand.

MVP (Muppet Valuable Player): In an episode all about Fozzie, he really was the one to watch. He had a new level of self-confidence that I loved. Fozzie’s a character everyone loves to root for, and now it feels like that rooting is paying off.

Best Guest: When Fozzie leaves the show, Nick Offerman steps in to guest-announce, which leads to a great running gag. All I’ll say is that from now on, I’ll say “I owe you a favor,” not “I owe you one.”

Obscure Character Watch: I spotted Foo-Foo on Miss Piggy’s lap as she plotted revenge. It was nice to see a moment with her and pig’s best friend.

Adultiest Content: Kermit’s story of accidentally licking his cousin and watching the walls melt. So he licked, but did he inhale? (I don’t know how psychedelic frogs work.)

One More Thing: It’s so great to see side characters like Chip and Yolanda have memorable moments this week. It might not mean much to the general audience, but to a Muppet die-hard, it’s great to see these characters haven’t been completely abandoned to the background.

Okay, One More One More Thing: If Kermit left the entertainment business, he’d move back to Mississippi. I hear there’s a museum he could work in…