The Muppets Episode 12: A Tail of Two Piggies – Review 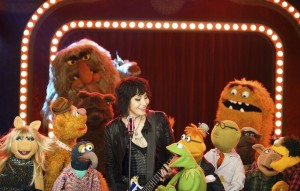 Stop me if you’ve heard this, but The Muppets has a new showrunner, and we’re smack in the middle of what the industry has unfortunately dubbed a “reboot.” It’s clear that Kristin Newman and the gang have been pulling out all the stops to make sure the Muppets (both the show and the characters) are friendlier, more positive, and more lovable overall. But has this improved the show as a whole? We here at ToughPigs have joked a little about the fact that this “reboot” is here to appeal to a certain type of fan who refuses to remember just how mean the Muppets could be on The Muppet Show, but we haven’t spent much time discussing what amplifying the niceness can do for the show’s writing quality. “A Tail of Two Piggies,” the twelfth episode of this season, makes a pretty compelling argument that this retooling actually allows for some new and improved plot directions for the show, and that’s exactly what I’d hoped.

Take Miss Piggy, the obvious center of this episode (and the show as a whole). In earlier episodes, most notably “Walk the Swine,” Miss Piggy was a largely unrepentant jerk. While this made it easy to laugh at Miss Piggy’s dialogue, it made her almost impossible to root for (pig pun intended). “A Tail of Two Piggies” puts the Divine Miss P in a place of real vulnerability, and this time the audience actually can empathize with her. When Miss Piggy shouts, “I’m a lady…AND A PIG,” it’s her “Bein’ Green” moment, and frankly it’s about time she was given one. 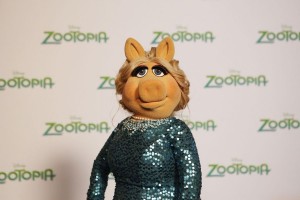 The plot is fairly simple. At a red carpet event for Zootopia (How does that movie work in the Muppets’ world, where animals actually do go to work and use cellphones and whatever? Don’t get me started), Miss Piggy experiences a dramatic wardrobe malfunction, exposing her curly tail to the world. In the aftermath, Miss Piggy is forced to grapple with conflict between the shame society wants her to feel and her own self-love. This leads to some fun monologues and character interactions both between Piggy and Number-One-Best-Muppet Uncle Deadly and Kermit and the new duo of Sam and Lucy. Plus, we get to see Miss Piggy’s biggest fan, Alinda, who is an adorable character with the potential to be the show’s new Robin if she sticks around (and a satisfying one-off character if she doesn’t).

No matter how you interpret the metaphor here, this is a compelling story that brings to light the inherent contradiction that’s been a part of Miss Piggy’s character since The Muppet Show: a glamorous star who’s also an unglamorous barnyard animal. In earlier works, this usually manifested itself in the form of jokes about Piggy’s weight, so I’m glad to see her quest for self-acceptance play out a new, less clichéd battlefield. The use of Alinda softens Piggy a bit and gives new weight to her decision, and because the show gives you the sense that Piggy and her staff care about each other, the audience genuinely wants to see her solve her problem. In the end, no matter how stupid that hashtag sounded, I cheered when Joan Jett came out to sing “Bad Reputation.” As Kermit says, “In a way, we all have a curly pig tail.” Folks, this is what being an adult is about: not just sex jokes, but also new and uncomfortable moments where identities and friendships are tested. 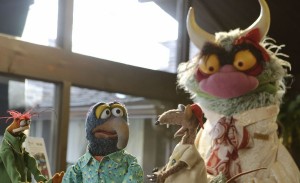 This theme of friendship also spills over into the B-plot, in which Rizzo and Pepe try to cheer up a brokenhearted Gonzo by offering to become his roommates at a new house formerly owned by Ian Ziering. While I’m not quite sold on this new sad and wimpy Gonzo, it was great to see his pals help him out (even if they helped themselves to a party in the process). I kept waiting for the other shoe to drop, for Rizzo to pull a fast one over Gonzo the way he did to Scooter in the aforementioned “Walk the Swine,” but that never happened. Instead, building Gonzo’s support system appears to be expanding the show’s universe further, potentially allowing for some new plots involving their new mansion. And the cliffhanger with Camilla the Chicken? There’s no way that moment could’ve happened without the emotional buildup Rizzo and Pepe provided.

And as for the second half of this reboot equation: Muppetier moments? Well, this episode brings us some hilarious puns from Pepe and Rizzo, visual humor from Sam the Eagle, funny human villains, and parodies of society’s squares. And I’d be remiss if I forgot to mention Big Mean Carl eating Scooter, this show’s first moment of one Muppet consuming another. Sure, not every joke lands. I was disappointed by “Piggy or Kardashian” and Deadly does swing in with at least one terrible fat joke. But I laughed more at this episode than any previous one.

So while this episode wasn’t perfect, I’m not going to focus too much on the missteps. Instead, “A Tail of Two Piggies” makes a pretty good case for looking forward, not behind (pun still intended). I want to see where these Muppets go together, and I’m glad to see it’s going to be someplace new. 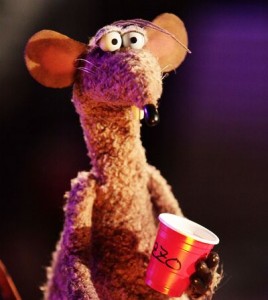 Best One-Liner: So far, Zoot’s novelty has yet to wear off. His “You know what? I’m napping right now” was one of the best quotes I’ve heard in a while.

Best Joke: So much of what Pepe and Rizzo said was pure gold. The extended chicken joke puns to describe Gonzo’s breakup were great, but I’m just waiting until Tumblr explodes with gifs of Pepe saying “So it turns out the key to attracting more ladies is to show respect and embrace things they care about. Who knew?”

Lamest Joke: While the Fozzie/Animal “Piggy or Kardashian” joke did have a good payoff in the show’s stinger, most of the time, it wasn’t as funny as the show seemed to think. These sketches need to improve; this wouldn’t even have been funny on Fallon.

MVP (Most Valuable Puppeteer): Eric Jacobson is always amazing, but this episode was an excellent spotlight for his Piggy and his surprisingly-deadpan Animal. 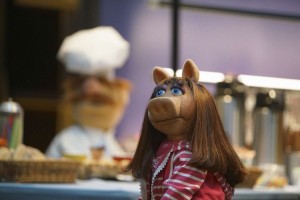 MVM (Most Valuable Muppet): The logical choice would be Alinda, who’s fun and adorable, but look, I don’t get to write these reviews that often and I’m taking advantage of my opportunity to give this award to the Beautiful Day Monster, for emotionlessly throwing pig tails into the audience. It’s about time he won something.

Best Guest/Song Watch: Joan Jett was terrific, as expected, and “Bad Reputation” was an excellent cap on Miss Piggy’s conflict. I wish we got to hear more of the song, however. They should put full versions on YouTube or something.

Adultiest Content: Clearly, the moment I associate most with being an adult was Gonzo finding a box of Camilla’s old things, which reawakened a sadness that he thought he had overcome and sent him spiraling into a new depressive episode. Either that or a naked Pepe telling a bikini-clad woman she’d be an excellent fourth wife. One of those.

One More Thing: Is Yolanda supposed to be conventionally attractive in the universe of this show? To other rats, sure, but like, according to Pepe and Piggy? Folks, it’s very weird that I’m questioning how hot a talking rat is.

Click here to eat Scooter on the Tough Pigs forum!