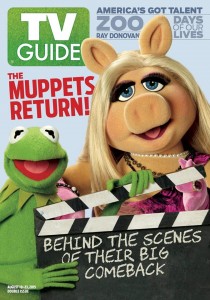 There’s a new Muppet TV series!  Can you believe it?  For years we’ve been hoping the Muppets would get their shot at a new TV show — and this is even better than we had hoped for.  It’s on the major broadcast network ABC, it’s in primetime, and they’ve been promoting it like mad.

Considering how concerned we were about the characters’ future after the underperformance of Muppets Most Wanted, this is a great thing.  The Muppets on ABC is just the Pepto Bismol we all needed to soothe our queasy fan stomachs.  It was just five months ago that we were worried that a series of interstitials on freakin’ Disney Junior was going to be their biggest project of 2015, and now here we are bombarded every day by promos featuring Muppets being funny and interacting with celebrities.

I can tell the marketing campaign is working because friends and family members who have never heard the name Dave Goelz are asking me about it and saying it looks really good. Months before its premiere, the show had already achieved a level of cultural saturation that Muppets Tonight could have only dreamed of on its best Andy-and-Randy-filled day.  So much of that is due to the Kermit & Piggy relationship drama, which the public has been eating up like [INSERT EXCEPTIONALLY FUNNY AND ORIGINAL REFERENCE TO BACON OR FROG’S LEGS HERE].  When it started, people compared it to recent celebrity breakups, but I’m pretty sure it’s gotten even more attention and press coverage than any of those boring human breakup stories. 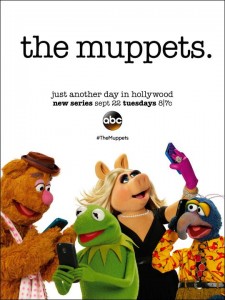 People know the Muppets are coming back to TV, and they’re excited.  But there’s something scary that comes along with this being a huge new thing that costs a lot of money. It’s the reality that if the show doesn’t work, it will be seen as a sign that it’s not worth spending a lot of money on the Muppets because nobody will tune in.  Then who knows how long it will be before we see our pals in anything again?

I probably don’t really have to say this to people reading this website, but when The Muppets starts, you have to watch it.  Every week.  Especially if you’re a Nielsen family.  If you have a DVR, record it and watch it again.  If you have Hulu, watch it again the next day.  While you’re watching it, tweet about it. (You can wait until the commercial for that one.  It would be a shame to miss a devastating witticism delivered by Uncle Deadly because you’re looking at your phone.)

And all your coworkers who have been saying, “Hey, those Muppet commercials are really fun?”  Tell them to watch it too.  Maybe even explain to them without getting too dramatic how important this is to the Muppets’ continued existence. Offer to make them sandwiches every week in exchange for break room recap discussions at lunch.  Send them a link to this article today, or Monday night, or Tuesday, to remind them.  Send it to all your friends and relatives.

That’s really the reason I’m writing this whole thing.  To increase our page views.  Wait, no. I mean, to help get the word out that for the future of the Muppets, and for the sake of all that is decent in this world, everyone should watch The Muppets.

Let’s keep this Muppet train rolling.  Where else is Beaker going to find work? 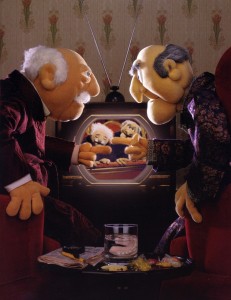