As of RIGHT NOW, some people in the universe have seen the theatrical trailer for the new Muppet movie The Muppets, as it’s attached to Disney’s Pirates of the Caribbean: On Golden Pond, which opened on Friday. But the trailer hasn’t been posted online yet, so those of us not eager to see the pirate movie have been sitting in front of the internet since Friday morning, anxiously checking Twitter and IMDb every eighteen seconds. I’m sure we’ll have plenty to say as soon as it surfaces, but as long as we’re still waiting, how about we talk some about that teaser poster thing?

It’s been a long, long, long time since we first heard that there was going to be a new theatrically-released Muppet movie. We’ve been hungrily anticipating each new morsel of information, and each time a new item about casting or filming locations or release dates has appeared, we’ve gone into a feeding frenzy, like ravenous, Muppet-loving sharks tearing apart a hapless victim. So of course we were excited when a picture of the teaser poster for The Muppets surfaced. I guess we can just call it The Muppets here from now on, eh? We don’t have to keep saying “the new Muppet movie,” because everyone knows what it’s called now. As for the poster, it’s called a “teaser” not because it’s going to make fun of you, but because it’s an early image and not yet the full-fledged movie poster that will have all the credits (and probably Jason Segel) on it. Anyway, here it is: 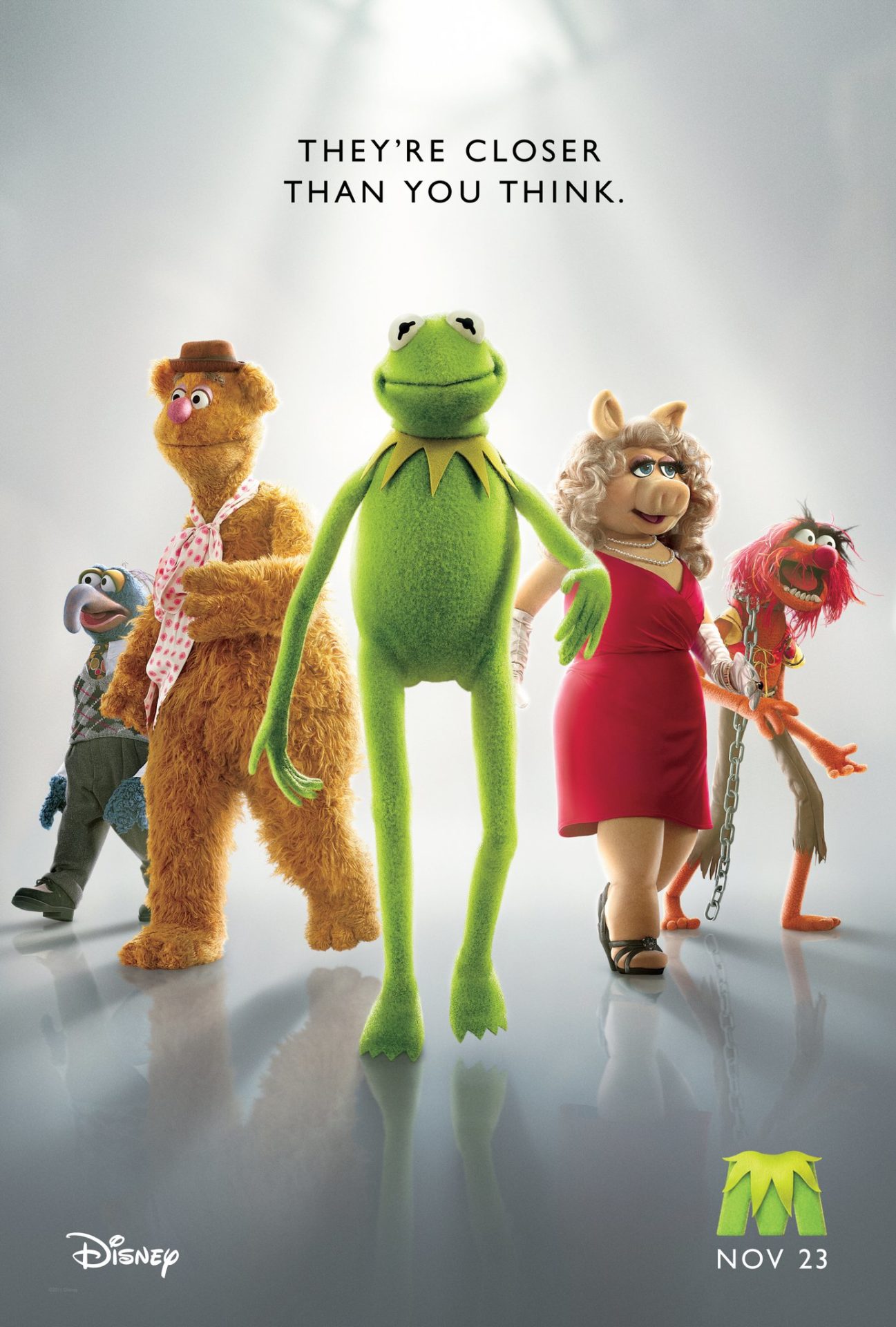 Of course, casual fans and big-time geeks alike have had all kinds of reactions to this. For some reason, a lot of pop culture blogs have commented on the fact that you can see the Muppets’ feet. A blogger at Movieline even went so far as to complain that “you should never EVER see the Muppets’ feet when they walk,” which seems pretty extreme (not to mention inaccurate), but hey, it’s the internet.

Over on the Tough Pigs forum, there’s been some discussion about the look of the characters… Do they look “right?” Are Kermit’s legs too long? Is Fozzie the right shape? I think they look pretty good for poser puppets… It would be pretty silly to declare that the movie is hopeless because one of the puppets looks a little off on the poster. One thing worth noting is that Kermit’s head looks like Kermit’s head. Which means they’ve successfully managed to avoid using the dreaded flat-face Kermit, so that should make us ecstatic right there.

As I mentioned in a news post a few days ago, I’m most curious about the tagline: “They’re closer than you think.” I guess it’s meant to invoke the feeling that when the movie comes out, the Muppets will no longer be nostalgic artifacts from your childhood — they’re about to break into 21st-century pop-culture relevance. But in practice, it’s a little spooky — it kind of makes me wonder if I should check under the bed for Muppets before I go to sleep at night.

And so, even before the official-for-real movie poster has seen the light of day, this film has already generated more interest than It’s a Very Merry Muppet Christmas Thingamajig, The Muppets’ Ashanti of Oz, and Letters to Santa combined. Which is great… but I wonder if it might be a blessing and a curse. By making this the highest-profile Muppet project since… let’s say 1996, Disney has created a situation where the pressure to do justice to the Muppet legacy is huge. I mean, really huge. Like, Thog huge.

Most of the news coverage about the movie, and pretty much all the blog posts about the teaser poster, include some speculation on whether it will manage to bring the franchise back without failing miserably to uphold the Muppet tradition. Nobody blogged about whether Letters to Santa would recapture the magic or any of that. More promotion leads to more awareness, which leads to more scrutiny, which leads to more cranky-pants people who grew up with The Muppet Show and the old movies just looking for reasons to hate the new one for disemboweling their childhood, or whatever.

But so far most people have been excited to see the trailer, and the reports that have trickled in regarding the trailer have been mostly positive, so probably what will happen is that everyone in the world will go see the movie on opening day, and it’ll make huge amounts of money, and we’ll get more Muppet movies and TV specials and talk show appearances and merchandise and all of it will be great and we’ll have nothing to complain about. Yeah, that’s probably what will happen. And maybe — MAYBE — if the movie is really, really, really successful, Disney will release The Muppet Show season four on DVD.