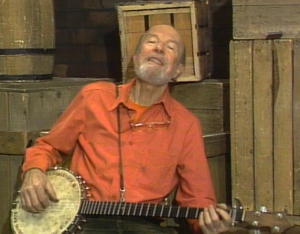 Folk singer and songwriter Pete Seeger passed away this week at the age of 94.  While he was regarded as a pioneer of folk music, having written classics like “Where Have All the Flowers Gone”, “Turn, Turn, Turn”, and “If I Had a Hammer”, we still remember him for his work on Sesame Street over the years.

In 1988, Pete Seeger returned to Sesame Street to make a very special cameo in the celebrity version of “Put Down the Duckie”. You can spot him around the 3:28 mark.

And in 2009, Oscar the Grouch returned the favor by appearing at Pete Seeger’s 90th birthday celebration at Carnegie Hall, singing Seeger’s “Garbage” with Tom Chapin and Michael Mask.

Pete Seeger obviously had a strong connection to Sesame Street’s long history, and we’re glad that we had the opportunity to appreciate his talent and count him among the celebrities that helped to make the show what it is today. 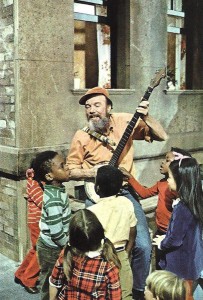 Click here to help us remember Pete Seeger on the ToughPigs forum!