Panwapa. It sounds tasty, doesn’t it? Well, you can’t eat it. But the good news is that it’s a new Sesame Workshop venture and it has Muppets in it! Panwapa (the name comes from a word that means “Here on this earth” in the Tshiluba language) is designed for kids aged four to seven, and its goal is to encourage “global citizenship” and a general awareness of the big ol’ world out there. That’s a pretty tall order, but if anyone can do it, Sesame Workshop can.

The show will debut on PBS Kids Sprout (which is available as a digital cable channel and video on-demand) in a few months, and there’s already an official website and an episode available for free download on the iTunes music store: Just go to the iTunes store and search for “Panwapa”… and then a few days later, you’ll get a receipt showing that you paid $0.00 for it. (Just don’t be a wiseguy and ask for a refund.) It just so happens that I am a child aged four to seven, so I decided to check out what Panwapa has to offer.

We’re living in a glorious golden age of free, legal video downloads, aren’t we? For absolutely no cost, you get no less than 48 minutes worth of brand-new content. Such a thing never existed until the internet age! Um, unless you count broadcast television, which has been around for 126 years now.

But wait… is this show called Panwapa or Panwapa Island? The bouncy theme song (which mostly consists of a guy singing the word “hello” in about 20 different languages — original lyrics by the Lonely Planet Tourist’s Phrasebook, apparently) talks about “Panwapa Island,” but the title screen just says Panwapa, so that’s what I’m going to call it. If you have a problem with that, I encourage you to write a letter to your Congressperson.

The show has a whole new cast of Muppet characters, most performed by veteran Sesame Street Muppeteers, so there’s a comforting feeling of familiarity even though this is not actually a Sesame thing. It’s like if you cooked up some homemade mashed potatoes from your beloved grandmother’s old recipe, eating them would make you would feel all warm and happy like you were at your Grandma’s house even though you weren’t. I guess what I’m trying to say is, Panwapa is mashed potatoes.

Monsters Are Scary… or Are They?

As the episode begins, Azibo the monster (performed by Kevin Clash) is very excited because he’s just arrived at his new home on Panwapa Island. We later learn that Panwapa Island doesn’t have a permanent location — it floats all over the globe, which is pretty cool. I picture it drifting around the ocean, bouncing between South America and Africa like the square in an epic game of Pong.

The first person Aizbo meets on the island is Koko the penguin (performed by Leslie Carrera), which makes sense. If there’s one thing the Muppets have taught us, it’s that penguins are perfectly comfortable in any climate. Ah, but Koko has never seen a monster before, so at the sight of Azibo she becomes black and white and FREAKED OUT all over. Koko runs aways screaming.

Azibo next attempts to introduce himself to Bill the bug, who is also terrified, and Tungar the tiger, who immediately drenches him with pepper spray. Okay, that last part’s not true, but Tungar flees in terror just like the others.

You know, I get that this whole story depends on the fact that the Panwapans are afraid of Azibo the first time they see him, but it’s kind of hard to accept because he’s such a cute, fuzzy, friendly thing. I like his lime-sherbet fur and the way the little hairs sway when he moves his head. I’m not afraid of him; I want a plush toy of him to put on my mantel (just as soon as I get a fireplace). On the other hand, I think I’d be mighty frightened if I ran into a tiger or a giant talking bug , but maybe I’m thinking too much. Maybe.

Listen to the Owl

Fortunately, that’s when Athena the owl shows up, and she explains what’s going on just as Azibo is ready to say, Stop the island, I want to get off. Athena tells Azibo, “They’ve never seen a monster before, and what you don’t know can scare you.” Ah, now I get it. And it makes sense… I don’t know anything about trigonometry, and it scares the crap out of me.

Athena encourages Azibo to try again to make friends with everyone. She gives him a pep talk. “Show me some monster pride — puff out your chest, lift up your head, pound on your chest, hop on one foot! Perfectly prideful!” Then she convinces him that “Just because you’re a little different doesn’t mean you can’t be friends.” Athena is a feathered fortune cookie. Say… isn’t it a stereotype that owls are wise? Doesn’t that kind of go against the whole non-judgmental mission of this show? Ah, forget it — I don’t think anyone gives a hoot about offending owls anyway.

Azibo tries again to be friendly, and this time it works! So there you have it, kids — if the other boys and girls on the playground won’t play with you, just keep asking until you wear them down. They will become your friends and will by no means make you eat paste. So then everyone sings “We Can All Get Along,” which I assume is an original composition. There are other songs later in the show, and they all have similar themes about tolerance and community spirit.

The message of “People can get along even if they’re different” is a good one. It’s one that Muppets taught us 20 years ago on Fraggle Rock, and it’s been used on Bear in the Big Blue House and Sesame Street. But apparently it hasn’t sunk in yet, because we still need Muppets to remind us. Maybe this time we’ll learn.

We Come From France

After this, Azibo shows everyone his “Panwapa card” and then Athena shows us hers (Her favorite animal is a cat. Shouldn’t it be, like, live mice?). The cool thing is that you can make your own Panwapa card on the website. Here’s my Panwapa Kid with his own customized Panwapa coat-of-arms. I’m interested in cats and tacos! Do you like my hat?

And then there’s a filmed segment with two little girls from France telling us about their trip around the world. Nothing says “entertainment” like looking at some strangers’ vacation pictures. But this seems to be the structure of the show… You get a story about the Muppet characters, and then you get a segment about some real kids from various countries. It’s sort of like if Sesame Street were half Global Grover, half street scenes, and no counting to eleven.

I’ve only talked about the first ten minutes so far. The rest of the show follows the same pattern, but I’ll let you discover it on your own (for free!). I haven’t told you about the Panwapans enountering snow, or playing in a public domain song cover band, or Azibo naming a nonexistent new nation after himself… heck, I haven’t even mentioned the three other characters… they’re SHEEP!

After watching the free episode of Panwapa I felt like running out and making friends with everyone in the whole wide world, even if they speak a different language or have different traditions or wear T-shirts with really stupid slogans. I guess my only real criticism was that it could be funnier… It just didn’t give me as many hearty, well-earned chuckles as the average episode of Sesame Street.

I don’t know exactly how they’re planning to present this show on TV — they could just as easily run it in fifteen minute bursts or in a compilation of segments like the iTunes download — but I’m guessing not a lot of people are going to see this show on Kids Sprout, which probably has a lot fewer subscribers than, say, the Sumo Wrestlers’ Macaroni Art Shopping Network. But I hope they get the chance to keep up the good work and maybe expand the world of the show a bit. And then they can get around to making that Azibo doll for my mantel. 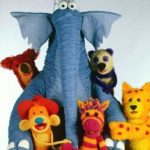