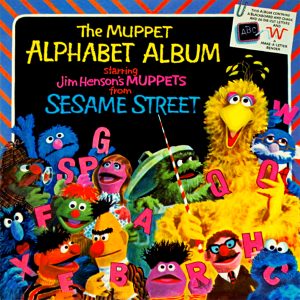 Among my favorite Sesame Street albums — definitely in my top 80 — is The Muppet Alphabet Album from 1971, which was later released as Sing the Alphabet.  Fully delivering on the promise of its title, the album features a song or sketch for every single letter of the alphabet.  The English alphabet, I mean.  Not the Old Norse alphabet.  There’s no track with Grover crooning a soulful tune about the letter þ.

The second letter belongs to Oscar the Grouch, who sings “Oscar’s B Sandwich” as he builds a truly disgusting sandwich fit for a grouch.  It’s a pretty short song, but Oscar manages to cram a lot of ingredients into it.  During a recent listen, I got to wondering: What’s the nutritional value of Oscar’s B sandwich?  How many calories are in it?  And so on.

Fortunately, we live in a time when it’s easier than ever to look up the calorie count of any given food.  So that’s what I’m going to do, mostly using MyFitnessPal, but also a few other calorie-tracking and food company websites.  At long last, I’m going to answer this question that nobody has ever asked.  The song, and the sandwich, goes like this… 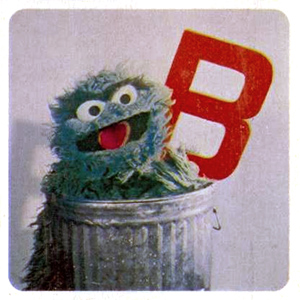 You begin with some brown bread: When I think of brown bread, I think of pumpernickel, and I bet Oscar does too.  This is going to be a pretty big, Dagwood-style sandwich, so it’ll need four slices to support all the ingredients.

and Boston baked beans: There’s a candy called Boston Baked Beans, and I wouldn’t put it past Oscar to throw those in his sandwich.  But I like the image of actual baked beans oozing out between the bread, so going to assume that’s what these are.

Add boxes of bacon: A bulk box of Hormel Black Label bacon purchased from Sam’s Club includes 72 slices of bacon, but that much bacon would overpower all the ingredients, so let’s be reasonable here.  I don’t know exactly how bacon was sold in 1971, but in 2017 a regular-sized package of Oscar Mayer original bacon contains 18 slices.  Since Oscar uses the plural “boxes,” let’s assume his sandwich includes two complete packages, so 36 slices.  That’s reasonable. 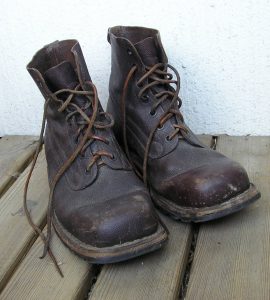 Then boiled boots: This is a tricky one.  My wife Staci helped me do the research for this one, and after scouring various sources and putting our heads together, I’m pretty confident with what we came up with…

billiard balls: According to the World Pool-Billiard Association, a regulation billiard ball is 2 ¼” in diameter.  Unfortunately, they don’t provide any information about how many calories should be in an 8 ball.  But guess how big a giant jawbreaker is?  That’s right: 2 ¼”!  Which means they’re pretty much identical to billiard balls in every way!

blackberries too: Half a serving of blackberries should do the trick.  That’s enough to add some much-needed sweetness, and just enough juice to dribble down and make Oscar’s fur sticky, which seems like something he’d be into. 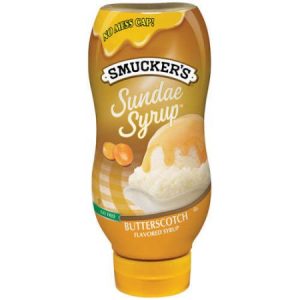 with butterscotch: Butterscotch takes many forms.  What kind of butterscotch is in Oscar’s sandwich?  Hard butterscotch candies are delightful when you steal them from your grandma’s candy dish, but they have the potential to break your teeth when you bite into the sandwich, and although we can’t see Oscar’s chompers, I firmly believe that he has some.  There are so many things taking up space in this sandwich, I think this has to be a liquid rather than a solid.  In other words, a single serving of Smuckers butterscotch syrup.

broccoli: Broccoli kind of looks like Oscar, so he probably wants enough of it to be noticeable, but not enough to make the sandwich too healthy.  Half a cup is just right.

and buckets of glue: Elmer’s School Glue, the glue everyone thinks of when they hear the word “glue,” comes in gallon jugs, which I’d say are pretty close to being “buckets.”  And I can’t tell you how delighted I was to find that MyFitnessPal includes nutritional information for Elmer’s Glue.  I guess kids eat it pretty often.  Two buckets of glue!

Place barbecued buttons on top of it all: I had to team up with Staci again on this one.  Based on our intense research, mathematical equations, and highly educated guesses, we’re pretty sure this is how it breaks down…

a bunch of bananas: A typical bunch contains five bananas.  Oscar seems like the kind of guy who might stick an entire banana, peel and all, on his sandwich, and I’m not sure how the variable of the peel might affect things.  So here’s what I’m going to do: Ignore it. 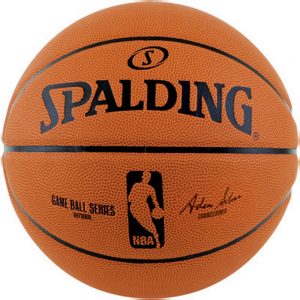 and a basketball: ATTENTION, EVERYONE! MyFitnessPal has nutritional information for a Spalding basketball!  I don’t know who needs this info for their diet, but I’m certainly grateful it’s there.  And I’m going to take their word for it.

A beef burger burned ‘til it’s black, oh boy! A well-done five-ounce homemade hamburger patty.  Just the patty, because putting an entire hamburger on a sandwich would be ridiculous. 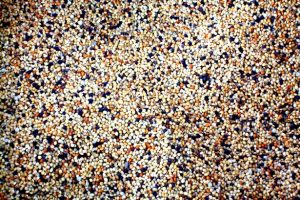 and a bag of birdseed: Six pounds seems to be a pretty popular size for birdseed bags.  There are also 16-, 20-, and 40-pound bags, but this is Oscar we’re talking about, not that other Caroll Spinney character.

and this beat up, brown, battered and busted old balloon: Attempts to Google information about eating balloons yielded some unpleasant results.  It seems balloons are indigestible, though, so… yeah.

Place barbecued buttons on top of it all, a bunch of bananas and a basketball.  A beef burger burned ‘til it’s black, oh boy! I was tempted to count all these things again, but nah, this is just Oscar repeating the chorus.  How many basketballs can fit on a sandwich, after all?

It’s a big B sandwich!  Eat and enjoy! 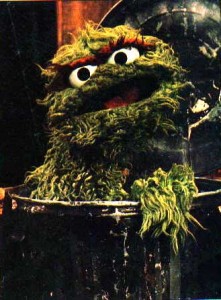 Carbs: 418g, or about 139% of the daily recommended carbohydrates intake.

And the final calorie count… 20,023!  That’s about 801% of the daily recommended calorie intake!  What a sandwich.

So that’s everything you could ever want to know about the nutritional value of Oscar’s B sandwich.  And that’s also the story of how I wrote 1,302 words about a one-minute, five-second song.

Click here to place barbecued buttons on top of the Tough Pigs forum! 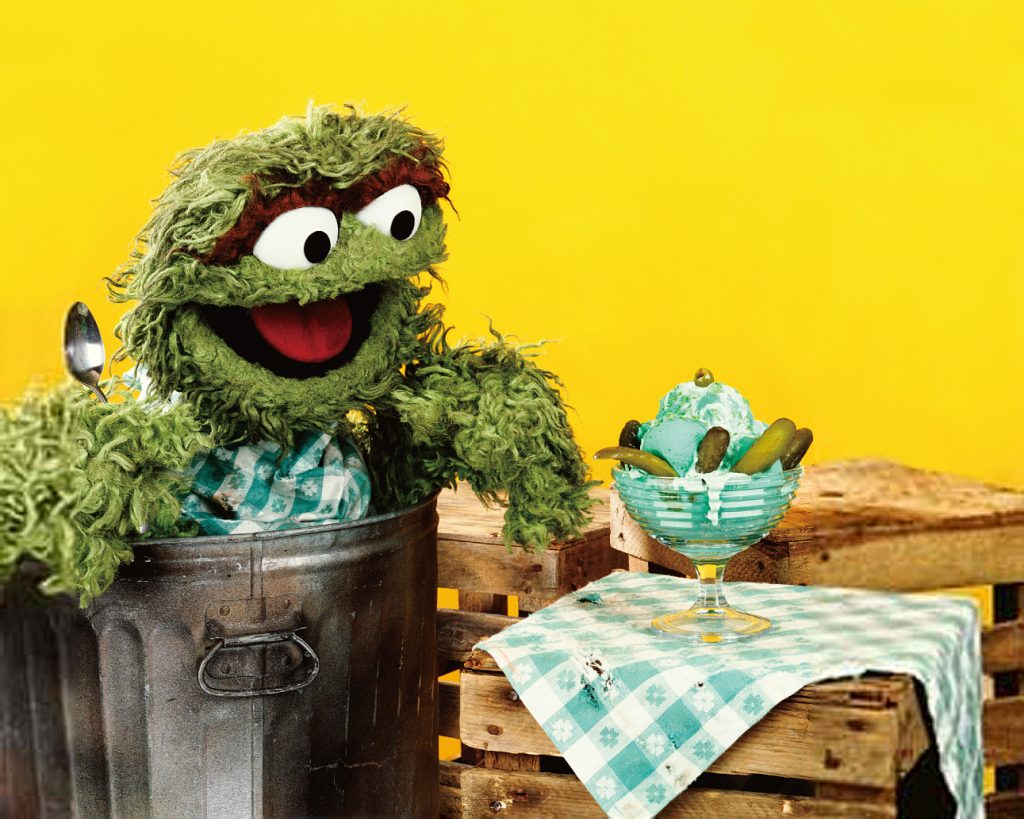 I couldn’t find a picture of Oscar eating a sandwich, so here he is about to enjoy dessert.