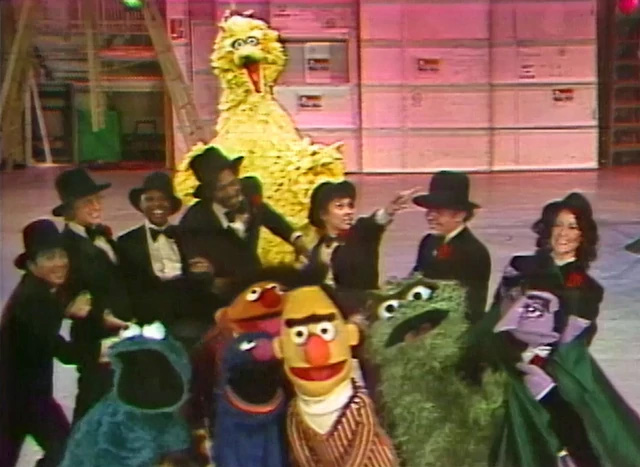 Welcome back, Sesame fans!  We are halfway through our lunch break, and we’ve got another half hour’s worth of content to cover on the back end of the Sesame Street/Electric Company crossover, Out to Lunch!

When last we saw our heroes… it doesn’t really matter. There’s no story or throughline in this thing.  Just more sketches.  I don’t know why I even started this paragraph that way.

Be sure you read part 1 before continuing!  Or don’t, because continuity be damned! 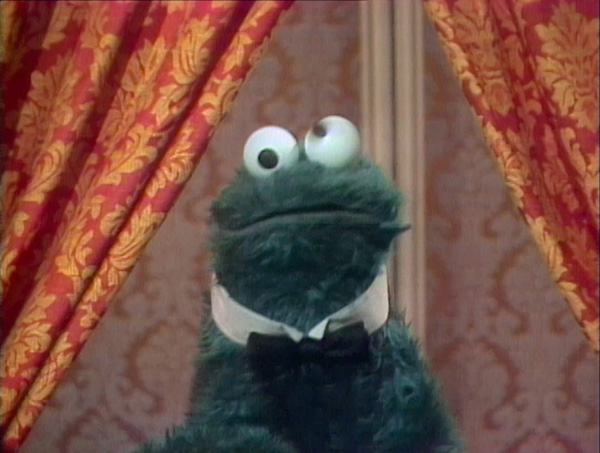 Out to Lunch continues with “Tomorrow Night at the Movies”, which is showing a clip from the film, “The Kookamunga Kid” featuring Elliott Gould as a card shark.  Gould finds himself playing against Cookie Monster.  He accuses Cookie Monster of hiding an ace up his sleeve, until Cookie points out that he doesn’t even have sleeves.  (In true Muppet fashion, Cookie is dressed like a Chippendales dancer – just collar and cuffs.) Gould bets two chocolate chip cookies, and Cookie Monster raises him five oatmeal cookies. 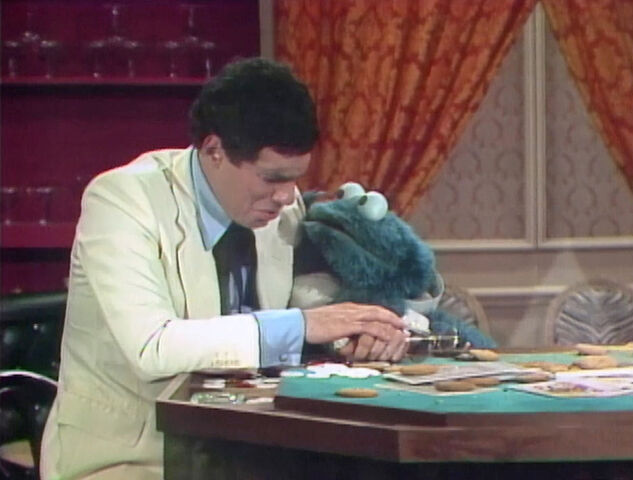 The bets continue to raise with pecan nutties, butternut fudgies, vanilla crisps, and one ladyfinger (which he slyly removes from his wallet).  Cookie Monster calls, and the poker table is now completely full of cookies.  Gould lays down his full house, and Cookie Monster believes his royal flush is a losing hand, so he forfeits.  When Cookie Monster begins to cry and panic, Gould takes pity and offers him one cookie.  Of course, Cookie Monster misunderstands and eats everything on the table.  Gould, now ruined, begins to cry, which makes Cookie Monster cry in return.  They agree to be partners, and to go to the Royal Donut casino to clean them out. 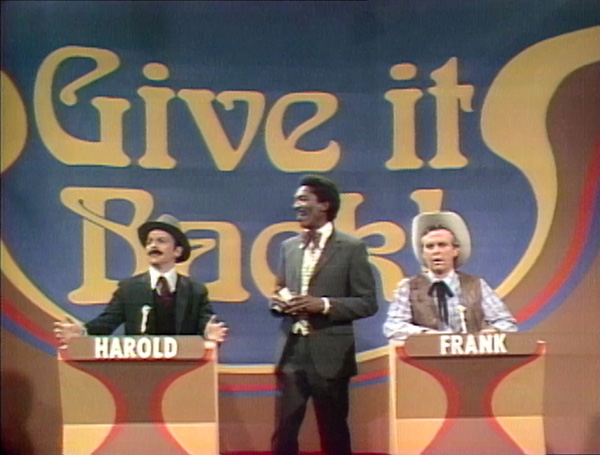 Morgan Freeman hosts a game show, “Give It Back”, where if contestants answer questions incorrectly, they must lose their belongings or pets or family members.  It… goes on for a while.  This is why the Powers That Be invented the fast forward button. 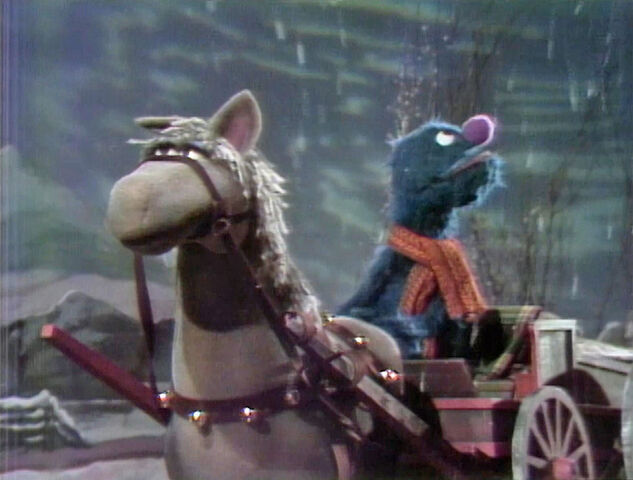 Next is one of the most fascinating portions of the special.  Grover rides in, towed in a wagon by a Muppet horse.  They’re in a wooded area covered in snow, as it flurries down over them.  Grover recites the Robert Frost poem, “Stopping by Woods on a Snowy Evening”.  Once the poem is finished, they ride off.  And that’s it.  It’s a surprisingly earnest and serious moment from Grover, who delivers the poem without any humor or irony.  I’m genuinely surprised that they attempted this, especially with such an innately silly character.  The quiet tone of the poem really shines through, and it’s a lovely moment in an otherwise chaotic special. 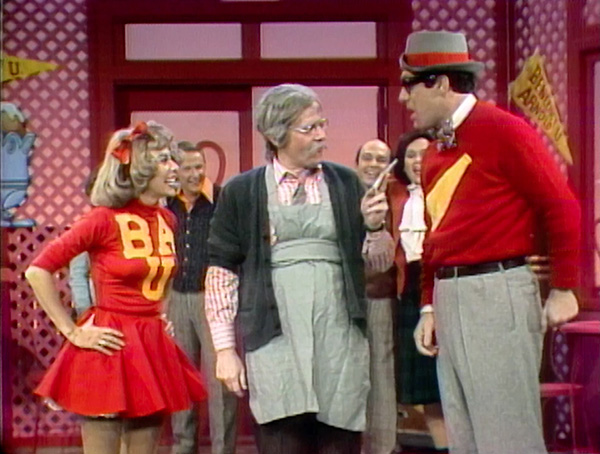 This leads into another Electric Company sketch, featuring Elliott Gould as a 1950s high schooler performing a dance number with Rita Moreno.  It didn’t help that Gould looks far too old to be in high school.  NARC! 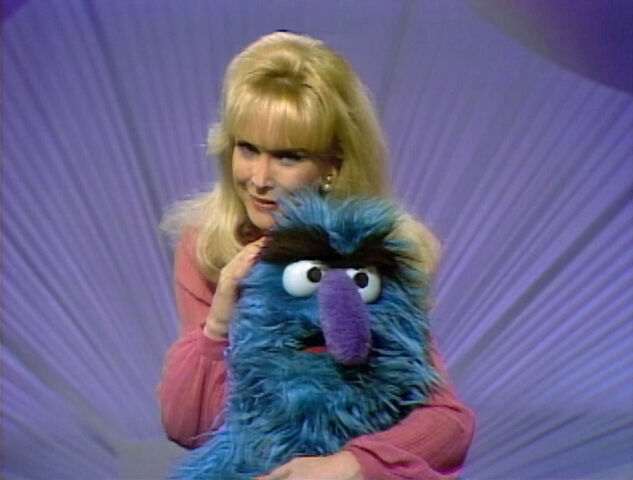 And we’re back to the Muppets!  Barbara Eden sings “Go Ahead and Touch”, another classic Sesame Street number, which originally played over a video of kids at a petting zoo.  Of course, being sung by a beautiful woman like Eden, the song takes on a completely different meaning.  If you know what I mean.  And I think you do.  Herry doesn’t get any lines in this number, just an opportunity to react to the lovely Joe Raposo song and a small kiss on the nose at the end. 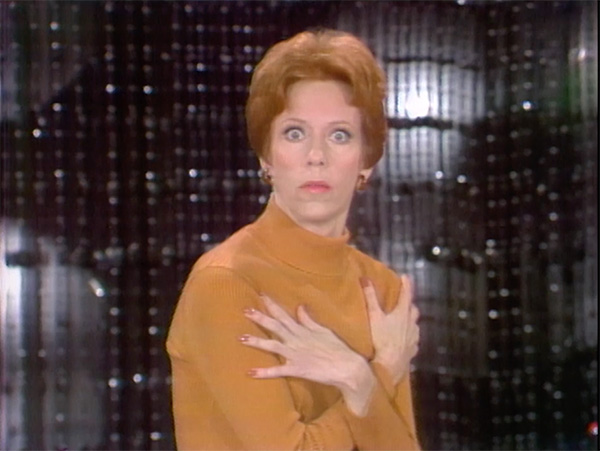 Carol Burnett returns, as a stagehand announces that they’ll be filming a bra commercial.  Burnett quickly drops her lunch, covers her chest, and says “no”.  Herry and Grover, watching off stage, say that the commercial was hilarious, and they’d like to see it again.  So, we do.  All two seconds of it.  Add this to the (very short) list of risque jokes with Sesame Street characters!! 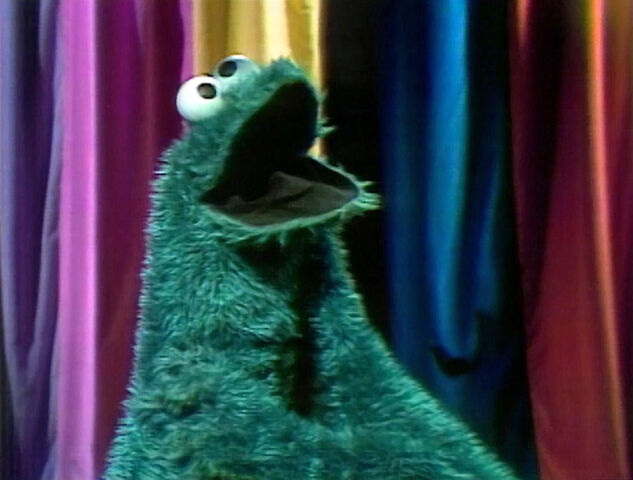 Cookie Monster stars in the next segment as host of “The Nighty-Night Show”, a spoof of The Tonight Show.  Guy Smiley announces the show as his Ed MacMahon sidekick.  Special guests on the show will include “singer Buddy Larynx, author Norman Mailtooth, and movie star Robert Redface”.  Cookie Monster appears in front of a multicolored curtain, spouting “Heyoooo! Heyoooo!”.

Cookie Monster: Look at that audience! This almost as good as last night’s audience, eh Guy?

Guy Smiley: This is last night’s audience! We locked them in the studio!

Cookie Monster: Me do jokes, you do the laughs.  Speaking of laughs, look at what Doc wearing. Get camera on Doc.

(Cut to the band leader dressed as a doctor)

Cookie Monster: Heyooo! Okay, get camera off Doc.  Say, funny thing happen to me on way to studio today.

Guy Smiley: What happened to you on the way to the studio today?

Cookie Monster: Honest, tell truth!  They just about to arrest him when he take chocolate chip shot.

(No response from audience, Guy laughs)

Cookie Monster: Ba-dum-bump, two three four.  But me want to tell you! You know what chef in Burbank yell when waiter drop box of Fig Newtons in soup?  He yell, “Too many cookies spoil broth”.

This whole segment is fantastic, and it makes me think that Out to Lunch should’ve just been “The Nighty-Night Show” for the full hour.  Cookie Monster is hilarious, and Frank Oz really gets to show off his brilliant comedy skills.  Plus, it’s a great precursor to when the Muppets host the actual Tonight Show just a few years later. 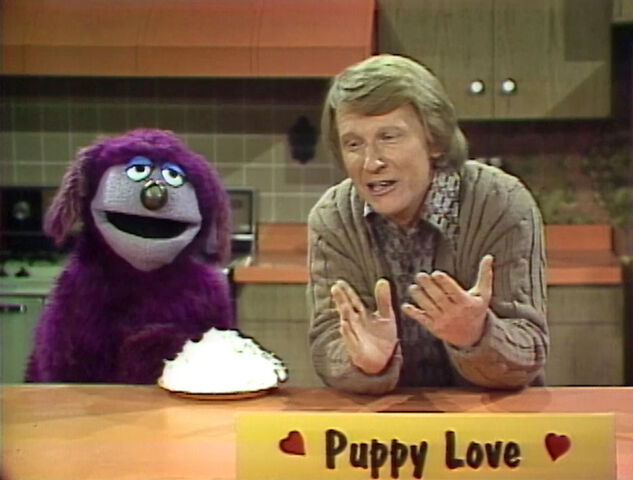 We cut to a (fake) commercial – a spoof of a dog food ad featuring a non-speaking Muppet dog who very much resembles Rowlf.  But, y’know, purple.  The commercial is advertising dessert-flavored dog food, and it predictably ends with the dog hitting the spokesman in the face with a pie.  This is the closest Out to Lunch comes to an actual Sesame/Electric Company crossover, as all the other sketches lean heavily on one cast or the other. 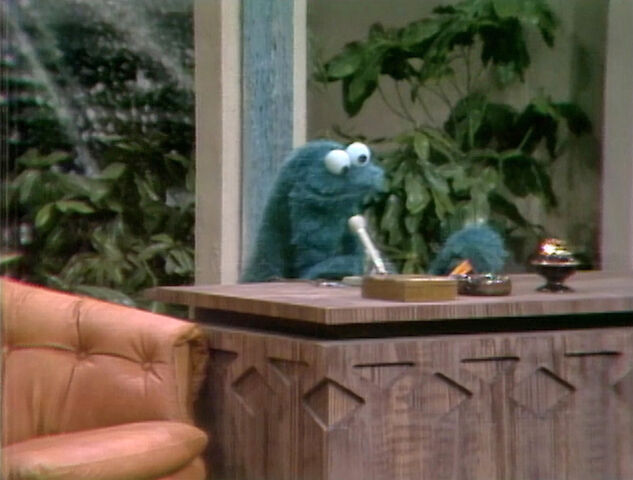 Back to “The Nighty-Night Show”, now Cookie Monster is behind the desk, and he introduces Elliott Gould, who sits on an empty soundstage and sings another Sesame Street song: “Nobody“.  I admit, I wasn’t familiar at all with this song, but apparently it was a Joe Raposo song sung by Mr. Snuffleupagus that only existed in audio form.  With only a few minutes left in this special, it felt pretty anticlimactic to have such a low-energy song with a blank set sung by someone not really known for his musical talents.  But I digress, let’s wrap this thing up. 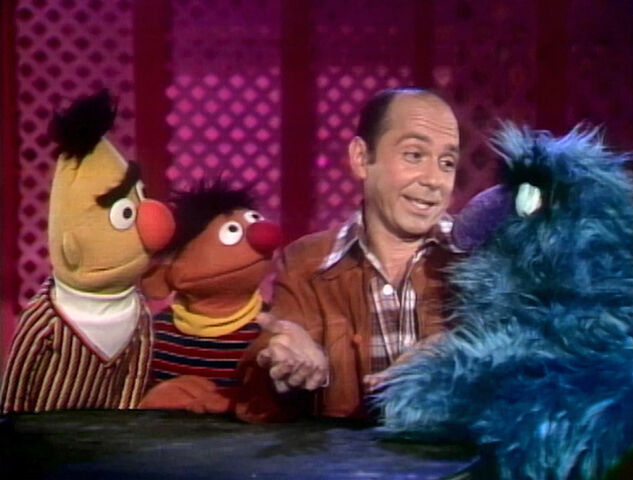 An Electric Company cast member announces the next segment: Celebrity Tag Team Wrestling, featuring Billie Jean King and Bobby Riggs versus the Chicago Bears.  But before we see that, Ernie and Bert rush in to reveal that our hour is up, and we have to stop the show.  Plus, they need to air the station break.  Herry follows in and offers to break the station for them. 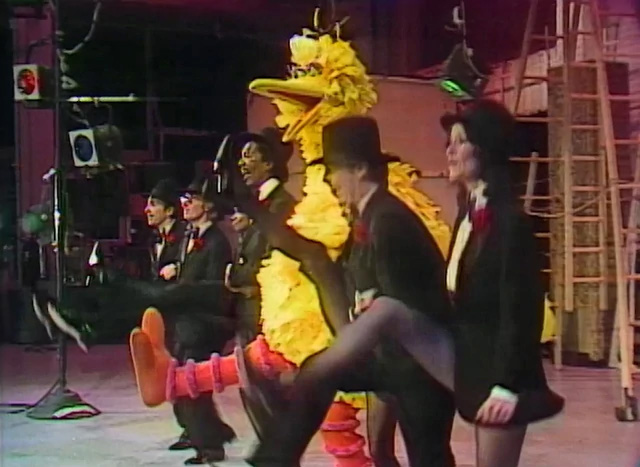 But we can’t go before we say goodnight!  All of the Sesame Street and Electric Company cast members take turns walking across the stage wishing you a good night.  Big Bird says, “nighty-night”, Oscar says “phooey”, Ernie says “goodnight” while Bert says “regards”, and Grover says, “goodnight, mommy”.  And then Big Bird (who really hasn’t been in this special at all aside from the opening and closing numbers) participates in a kick-line with the Electric Company cast. 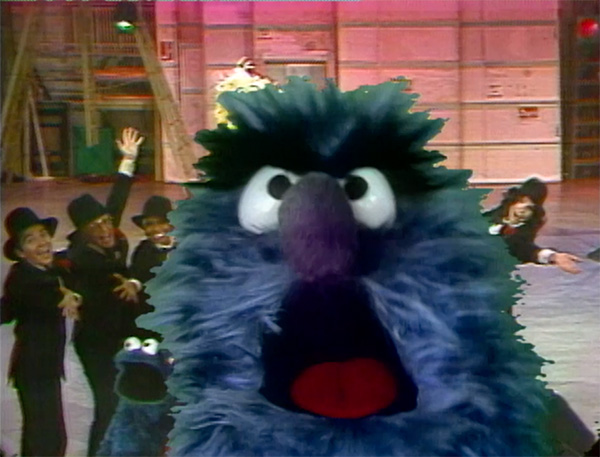 Just as the final number is ending, Herry Monster pops up and says, “Now I’ll break the station!” as he uses a mallet to smash the entire screen, revealing Carol Burnett behind finishing her lunch.  Defeated, she gives up and says she’ll perform.  The announcer tells her to just say goodnight, so she does and receives thunderous applause.  And Burnett takes a bow!  Isn’t she marvelous?? 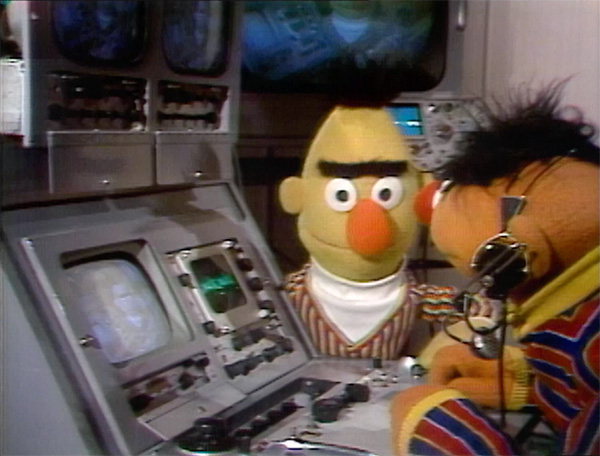 And that’s it for Out to Lunch!  We never actually see the ABC staff return, or the effects of the chaos they caused.  But that’s alright – we got a full hour of a fun variety show (or, a little more than half, assuming you were as disinterested in the Electric Company stuff as I was).  The Sesame characters all really shined, and it’s obvious to see that the performers were having a great time focusing on the humor and fun, rather than the curriculum normally needed on Sesame Street.

I came out of this special feeling like I needed to see more from these characters on this type of show, which is exactly what Jim Henson was hoping.  In fact, you could say that Out to Lunch works as another pilot to The Muppet Show.  It certainly looks and feels like The Muppet Show, just with other familiar characters.

Thanks for joining us on this journey through a lost Sesame Street project, and we hope we can help find a way to make this video public someday! 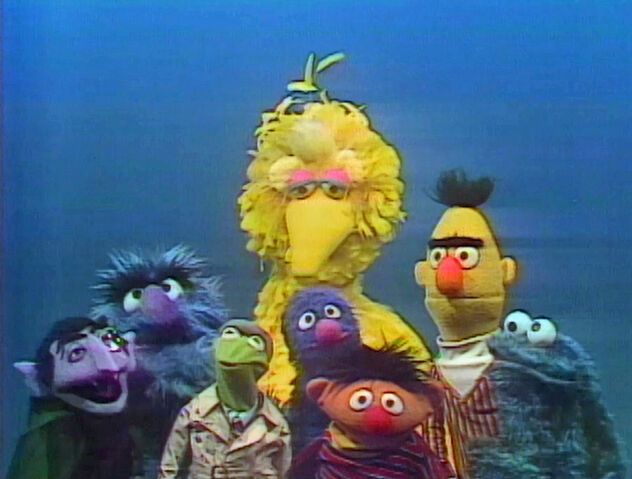 Click here to swing an invisible golf club on the ToughPigs forum!