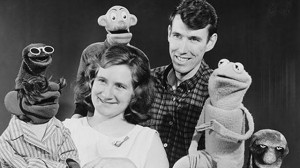 The O’Neill Puppetry Conference is pretty much the most important annual gathering of puppeteers in the world.  And we have Jim and Jane Henson to partially thank for its existence.  Jim for his collaboration and participation in the organization before the conference was established, and Jane for being one of the original founding members of the conference itself.  And now O’Neill is paying back the favor.

The Eugene O’Neill Theater Center in Waterford, CT, will dedicate a new building, currently under construction, to Jim and Jane Henson.  The building will be a new rehearsal hall to be used as the headquarters for the O’Neill Puppetry Conference, as well as the other arts events the Center hosts throughout the year.  The building will be in use for the 2015 O’Neill Puppetry Conference, which also happens to be their 25th anniversary.

So if you’re planning on attending the O’Neill Conference next year, be sure to take note of the plaque on the entryway to the new Jim and Jane Henson building!

Thanks to Austin Costello for the head’s up! Click here to dedicate the west wing to the ToughPigs forum!