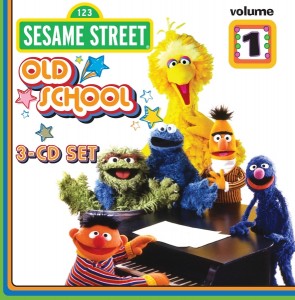 When I was just a wee little ToughPig, I cherished my Sesame Street record collection. I fell asleep to my Sesame friends singing about numbers and trash and pigeons and buying the letter O every night, and to this day, I have trouble listening to Sesame music without subconsciously adding the static of my record player into the background. Lucky for me, the folks at Sesame Workshop found out about my love of the old stuff and released the first volume of classic albums under the Old School banner. (For me??? You shouldn’t have!)

Old School volume 1 has a fun selection of albums: “The Sesame Street Record“, “Big Bird Sings!“, and “Bert & Ernie’s Sing-Along“, all of which are great examples of what Sesame albums were like back in the day. “The Sesame Street Record” has your mix of songs from the core cast, making you feel like you’re sitting on the stoop with Bob, Susan, Gordon, and Mr. Hooper. With “Big Bird Sings!”, you get an enjoyable spotlight of a solo character, and you’ll hear the yellow guy stretch his vocal talents across several different genres. And “Bert & Ernie’s Sing-Along” gives you the fan favorite, which so many people remember for being that one where everyone has a sing-along in the bathroom while Bert is trying to take a bath. (Did they actually show this on Sesame Street? The jury’s still out!) 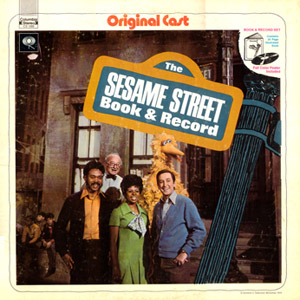 The superstar of this CD set isn’t any character or song. It’s the engineer who handled the remastering, which brings these familiar songs to us in a clarity I’ve never heard before. With the volume turned up loud and my eyes closed, I could swear that Big Bird is right there in my living room, mispronouncing the alphabet and stumbling over garbage cans. The remastered tracks also highlight those little imperfections in the recording, which is endearing, especially when you consider the fact that they’d never let any mistakes slip by nowadays. And the albums are mixed in stereo, bringing a much fuller sound to every song, as well as little surprises like having Gordon in your left ear and Susan in your right. Sure it sounds uncomfortable, but would you want anyone else hanging out in your ears?

Another nice touch is that they kept the references to the fact that you’re listening to a record in-tact. So halfway through “Bert & Ernie’s Sing-Along”, Ernie reminds you to turn the record over, and at the end of “The Sesame Street Record”, Gordon lets you know that you can start the whole thing over by flipping the disc. It makes you wonder, how many kids are going to hear that and wonder what a record is? Or, worse yet, how many will actually try to turn their CDs upside-down? 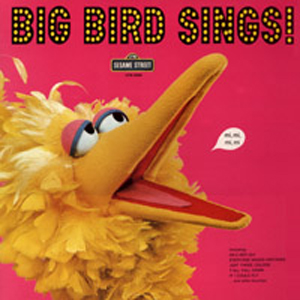 I’m trying hard to choose a favorite album of the three, but that’s a much more difficult decision than I thought it would be. “The Sesame Street Record” is so classic and genuine, and it was recorded at a time when the cast still wasn’t aware that Sesame Street would be the mega-hit it would soon became. Was it any surprise that this album won Sesame Street its first Grammy Award in 1970?

But “Bert & Ernie’s Sing-Along” is also in the front of my mind when choosing a favorite. Bert’s ignored pleas for a towel (and a little privacy), David throwing The Count into the shower, and Oscar being a generally grumpy music-hater all lend themselves to be classic moments, especially for a production without any visuals. It also stands out as Sesame Street‘s first concept album, with a solid narrative to explain why everyone is gathering to sing a bunch of random songs. Plus, it keeps you on the edge of your seat, waiting to discover whether or not Bert will ever get that towel he craves so badly! You can cut the tension with a knife! 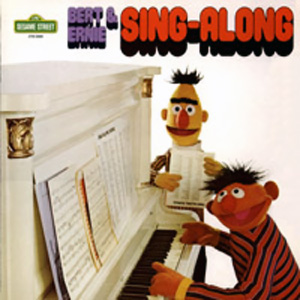 The only gripe I’ve found so far is in the packaging. The CD sleeves are very pretty, simulating record sleeves of yore (which I guess you’d only find at a flea market these days), and the art on the CDs look like the records themselves, all of which gives a euphoric feeling of nostalgia to those of us who actually remember those precursors to the iPod. But the CDs don’t fit snugly into their sleeves, and the sleeves don’t fit snugly into the case, leaving a little bit too much chance to having them fall out or get scratched. Considering the fact that this set won’t be released in digital format, leaving this to be the only packaging option available, it’s surprising that we should be left with such an obvious design flaw.

I’m sure it’s no surprise to hear that we wholeheartedly recommend buying this CD set. That’s pretty much our status quo for anything old and reissued coming from Sesame Workshop, which continues to treat its all-grown-up fans to gems like this. Here’s hoping they’ll keep up with that trend and add a “volume 2” to our collections in the near future! 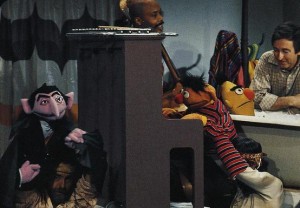 Click here to just give Bert a towel, for Pete’s sake! on the ToughPigs forum!