Just when you thought the bulk of new Sesame Street videos were finished for another season, Sesame Workshop went ahead and surprised us with what might be the funniest, most clever skit from the past 15 years. If you haven’t seen Grover’s Old Spice parody yet, put away your Official Muppet Fan Initiation jacket and check it out right here:

Naturally, the video went more viral than that case of the avian flu I caught last year. But inquiring minds want to know more. For example, did Grover really smell all that great? We tracked down one of the minds behind the “Smell Like a Monster” video, Sesame Workshop Vice President of Digital and Interactive Media Miles Ludwig. Below are his answers, paraphrased by yours truly.

How did the video come about? – While generating ideas for season 41, the writers watched the Old Spice videos for inspiration. After seeing the making-of video, they figured they could do a similar skit in one continuous take. And who better to be the spokesmonster than Grover? With hope, they video would go viral and draw attention to the new season.

Who wrote it? – J Milligan, who also directed the piece. Milligan is the Creative Director of Digital Media and head writer of interactive products (DS and Wii games, the Sesame Workshop website, iPhone games, etc).

Is the video just for the internet, or will it air on Sesame Street? – Just internet. The video is purely promotional.

How many times did Grover have to run through it? – It took about 50 takes, and they used take #35. The video was shot in a small green screen studio, all in one day. The entire production, from inception to the final product, took about a week.

Were there any problems getting the timing right? – Matching the camera movements over multiple takes was difficult, especially since the studio was so small. The camera had to pan in and out manually to hide the off-screen action and props.

Which puppeteers worked on the piece? – Eric Jacobson as Grover, Stephanie D’Abruzzo as the cow, and Paul McGinnis as an assist. Eric was very into it, and he studied Isaiah Mustafa’s performance very closely to get the parody right.

Since it was filmed around the time of the Katy Perry incident, did that have any affect on the production? Were there any eyebrows raised at Grover losing his towel? – No, not at all.

Hooray for new information about a 50-second clip! 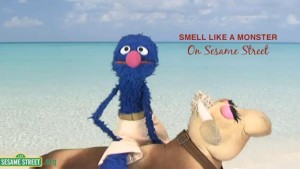 Because this video premiered on YouTube, the toughest critics of all are the YouTube viewers. Let’s see what some of them have to say about Grover’s commercial.

IAMCynita – I am on a horse ***moo*** cow.. lol
hootyhaha – GROVER IS BETTER THAN ELMO
bravido2 – women monsters prefer dudes that smel like monsters.
Ravensontop – I am on a horse, moo, cow. rofl!
vegeta995 – ITS LEBRON JAMES
guywithshirt – Imagine how creepy these puppets are without hands up their butts :S
halcyon0830 – Why is Sesame Street advertizing for Old Spice ???? Why did Sesame Street Sell-out so fast ???
IrkinWarrierKirt – i am on a horse-Moo!-cow.
Terza94 – where is the cookie monster?! 🙁
Revel8ns320 – old spice xD more like “old grover” ha.
InsomnicPixel – i liked the part where the “horse” went moo 😛
jamigar98 – lol “I’m on a horse” “MOO” “Cow”
Matt0257cp – this reminds me of the old spice commercial
DJGskull – This video still doesn’t make up for the fact that Michelle Obama changed the cookie monster in to the veggie monster.
groovybassline – whoa… watching that on drugs is so weird
LeytonLuva22 – lol I am on a horse! *moo* cow! (LMFAO)
SupaCoolShizzz – Grover’s got skinny ass arms.
anuca2 – THE COW IS NOW DIAMONDS
stevengood12 – i love super goober
Oneofakind407 – I am on a horse MOO cow….
SlightlyRotated – That cow shut Grover down =)
CarlChipSanders – GROVER EATS BABY DEER!
ChronicTroll – Hahahaha nobody noticed this is a parody of the Old Spice commericals hahahahaha stupid
sexbagelsk8er – i am on a horse. “MOO” cow.
renumeratedfrog – I love Grover! Too bad he’s gay though.
laugheenoutLoud – Still too much cleavage

So the verdict is in. YouTube commenters love the video! At least, I think they do. Well, they love the cow. Or, they’re aware that the cow exists. Let’s call it a success anyway.

Many thanks to Miles Ludwig for agreeing to talk to us about the video! And many thanks to the thousands of YouTube commenters. You bring a joy to me that you will never know.