New Director For Next Muppet Movie?

Here’s an interesting development: New York Magazine’s Vulture is reporting that Flight of the Conchords co-creator James Bobin may soon be appointed as the director of the upcoming Jason Segel-written Muppet film. Flight of the Conchords was a really funny, clever show with lots of music, so he seems like a pretty good choice for the Muppets.

According to the article linked above, Bobin has also gotten the offer to direct a Judd Apatow movie called Bridesmaids, so he may be forced to choose between the two. Of course, if he has any sense at all, he’ll choose the one with the frogs and dogs and bears and chickens and things. The article also mentions the possibility that production on the film could start this summer, which would be great news for all the fans who have been holding their collective breath all this time. 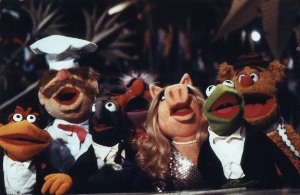 Click here to direct your comments on this story to the Tough Pigs forum!