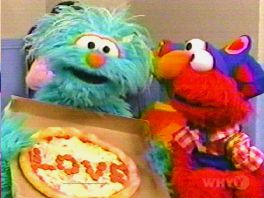 Oh, I don’t know. I was going to do a whole piece today on Global Grover and the new Journey to Ernie segments, but I just can’t think about that right now. Today’s street story has me all messed up inside, and I don’t know what to do with myself.

The whole thing is just totally surreal. I still can’t believe it happened.

It all starts in Gina’s office. Gina is the Sesame Street veterinarian, and Elmo brings his goldfish in for a checkup. Which is weird enough to start with, because how would you know if a goldfish was healthy or sick. Goldfish only have two speeds — swimming and dead. But Gina says that Dorothy is a very healthy fish, so fine, she’s the doctor. Then she offers to carry the goldfish bowl home for Elmo, to make sure Dorothy gets home okay, despite the fact that she has a waiting room full of impatient animals. 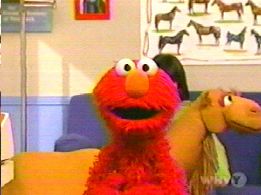 “Wow,” Elmo says, “Gina takes great care of Dorothy. Boy, she’s so nice, too. Really, really nice! Boy. Elmo loves Gina.” Then there’s a little twinkle of silvery bells — and Elmo apparently gets a sudden attack of puberty. He yells, “ELMO loves GINA!” … and he follows after her, lovesick.

We are one minute and forty-five seconds into this episode, counting the opening theme, and already I am sitting on the floor trying to remember how to breathe. What the hell just happened?

I thought I was watching Sesame Street. I was all prepared for some kind of curriculum on remembering to feed your goldfish, and all of a sudden, it’s turned into a French art film about a young boy’s preschool sexual awakening. Is this really what we’re doing today? 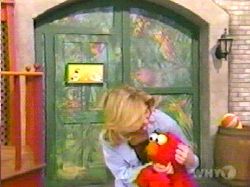 It is. Gina takes Dorothy home, and she gives Elmo a hug. Elmo stares at her as she goes back to her office. Rosita comes by, and she asks if Elmo’s all right. “Elmo’s VERY all right,” he sighs. “Elmo’s in love with GINA! And wants to MARRY Gina! And live together forever, with our fish-baby Dorothy!” Rosita is totally in favor of this new development, and she encourages Elmo to tell Gina how he feels. He was too shy to say it, so Rosita suggests that he sing Gina a love song.

Rosita plays the guitar, and Elmo sings: “A-mor, a-mor! That means LOVE in Spanish! So open the door, and please — por favor! — be Elmo’s love forever!” They practice this song three times. 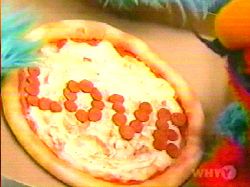 And I’m sorry — I’m a broad-minded guy, pedagogically and romantically — it’s just that I have to wonder what kind of lesson plan we’re operating on at this point. Is this a big three-year-old issue, how often to practice singing your love song before you come on to your veterinarian? I mean, tell me if it is; I’m here to learn. But is pre-K really rockin’ on this level these days?

Anyway, the song doesn’t work — Gina doesn’t realize that it’s meant for her — so then Rosita and Elmo decide to Say It With Food, and they bake a pizza with the word LOVE written on it in pepperoni. That gets eaten by the animals in the waiting room before Gina even sees it. Now, I have to admit that this really is a good lesson for kids: The LOVE Pizza never works. I learned that one myself the hard way, and if Sesame Street had tackled the LOVE Pizza issue when I was a kid, it would’ve saved me a lot of heartbreak and about two bucks worth of pepperoni. 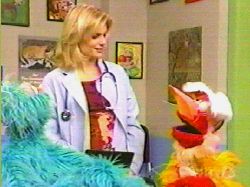 So then — and this is when the surreality really starts to kick in — Elmo decides that the only way to get a veterinarian’s attention is to disguise himself as an animal. But he can’t figure out which animal to be, so he dresses up as four animals at once: “A chicken-kitten-cow-bunny!” There’s a long waiting-your-turn sequence for extra suspense, and Elmo breathes, “Elmo will wait forever to see Elmo’s love!”

Finally, Elmo gets his chance to go in and see Gina. He hems and haws, so Rosita pops her head through the door and yells at Elmo to confess his love for Gina, that he wants to marry her and live together forever with their fish-baby. 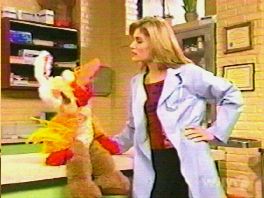 At this point, I’m just sitting on the floor and thinking that maybe this is a dream sequence. Not on the show. For me, in my head. This is a dream, and I’m not really seeing this on Sesame Street. They can’t be about to demonstrate to preschoolers how to turn down a guy who asks you out when you’re not really into him.

They are. They do. It’s happening.

Gina lets him down easy. “You see, there are different kinds of love,” she says. And what three-year-old hasn’t had a conversation that started that way, huh? Am I right, three-year-olds? She goes on: “You and I, we love each other very, very much, yes, we do. But, Elmo? It’s a friend kind of love. I don’t think we can get married.” 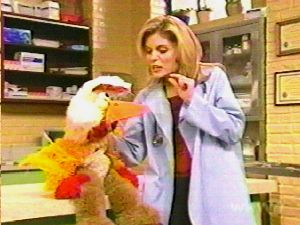 Gina patiently explains that three-year-olds can’t marry grown-ups — that only grown-ups marry grown-ups. Actually, as someone who’s been on both sides of this kind of conversation — with grown-ups, always with grown-ups — I think her breakup technique is almost perfect. There’s just one little flaw, which is this gesture that she makes right at the end. If I can give the kids at home a little piece of extra advice on the subject, it’s this: Never make this gesture when you’re explaining to a guy why you don’t want to go out with him. Just don’t, okay?

So, I don’t know. I mean, like I said, I’m a broad-minded guy, and I’m all for bringing more love to the Muppet world. So it’s hard to say why this episode is making me feel all restless and upset. I guess I always figured that when Elmo hit this stage, he’d have a crush on me, so this is kind of hard for me to watch. 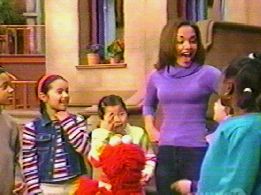 Anyway, it does actually get even more complicated later on. There’s a segment about six minutes later with Gabi, Elmo and a bunch of kids, singing a song about being a “strange animal.” Gabi sings, “I have feathers, I have fur. I have horns, I moo and purr. I can moo and tweet and meow… Can you guess what I am? I’m a kitten-bird-cow.” And I’m like, oh man, is Gabi in love with Gina too? This whole show is getting way too fraught today. It’s in fraught overdrive. 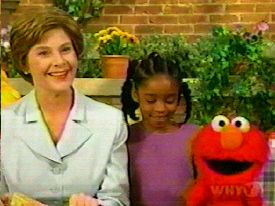 And then the really, really bad thing happens. The next time we see Elmo, he’s sitting next to — no, it can’t be — he’s sitting next to Laura Bush. Laura Bush has come to Sesame Street to read a book with Big Bird, Elmo and some more kids. Elmo seems way over-excited about the whole deal. “Oh, boy! That’s Elmo’s very favorite monster book! Can Elmo help Mrs Bush read it?” Sure, says Mrs Bush, and maybe I’m just in this kind of space right now, but it seems like there’s all this chemistry between them. It’s electric.

So all I can say is that if Elmo ends up having a rebound relationship with Laura Bush, then it is over between me and Sesame Street, and this time I mean it.