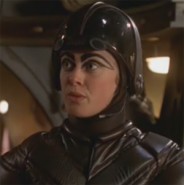 So now Crichton and Chiana want to find D’argo and Jool — or, to be more precise, they want to find D’argo, and Jool happens to be there too. They’re at an archeological dig on a nearby beach planet, which isn’t super surprising. Everywhere in the Farscape universe is either a beach in Australia, or Hell. There’s rarely a third option.

Turns out the planet they’re on is The Most Important Planet in the Universe, except people can’t usually go there on account of all the magnetics. I don’t know what’s so scary about magnetics, but as soon as they land, everybody’s like, uh oh, magnetics. It’s like every week they choose a word that everybody’s supposed to be scared of. “The magnetics are spiking!” they say, and everyone panics. Well, that’s magnetics for ya. They’ll do that. Other scary phrases of the week include: The Third Probe, Intercepted Transmission, and Hypnotic Cleavage Sweat. (More on that later. Lots more.)

Anyway, there’s only six people on the whole planet when Crichton arrives, so it’s a shame that five of them are so annoying. There’s Instructor Vella, who’s rude and keeps doing exposition, so you know she’s evil. Ditto with Tarnat, who just says, “You’re a Peacekeeper!” over and over until somebody hits him. There’s Granny, aka Wrinkles, aka The Old Woman, aka (in my house, at least) Monchichi. The fact that she doesn’t actually have a name says a lot about how irritating she can be. And then there’s this big cranky fish guy, whose name, according to the internet site I looked at, is Oo-Nii.

By the way, what the hell? Can I have a little sidebar about names on this show? I mean, I’m down with the idea that people should have Space Names. Yes, if Crichton went through a wormhole and everybody had soap names like Reva and Thorne, it would probably seem kind of lame. (You know. “I intercepted a transmission from Brooke.” That kind of thing.) But can we at least give them Space Names that native speakers of English can recognize as names and then have a fighting chance of being able to pronounce and spell? I mean — Vella, Tarnat and Oo-Nii? How I long for a Chad.

The old woman tells Crichton that the dig people are evil, which is not a huge surprise since they’ve been insulting everybody and waving guns around the whole episode. She says they want to find the probes so they can use them as a weapon. I don’t know why archeologists would want a weapon of mass destruction, but maybe they have to compete for funding or something. The old woman blows powder in Crichton’s face, which gives him a vision of the way things were in the past. “See, see the ancient world,” she says. “See the peace.” Now, I’ve gotta level with you here. The stuff that Crichton sees is ancient and all, but it’s not so much peace. The whole vision is priests in bright red robes ritually slaughtering a three-eyed goat. So why was it such a big tragedy when the probes fell? It doesn’t seem like a huge loss to me.

“Si, si, the Darnaz probes,” the old woman says, lapsing into Spanish. The three probes fall, and Crichton sees where they land. This is great and all, but in about twenty minutes, she’s going to be throwing him off a cliff because of it, so whatever.

Oh, did I tell you about Grayza? That’s the other thing. Grayza is like the new Scorpius — she’s big and bad, she keeps Scorpius as a pet, and she has hypnotic cleavage sweat that clouds men’s minds. I shit you not, she really does. She kind of reaches into her cleavage — which is not hard to do, since it’s always exposed for easy access — and then she twiddles her fingers under the guy’s nose, and then he wants to kiss her and do whatever she wants. It’s pretty excellent.

So Grayza intercepts a transmission to Moya about Crichton being on the planet, and she instantly sh’booms down there to twiddle her fingers under Crichton’s nose. He macks out with her, and promises to tell her everything he knows.

I have to say that at this point, I am completely on Grayza’s side. If I had hypnotic cleavage sweat, that’s exactly what I would do. Good on ya, Grayza. Keep going with that, I think you’re on to something.

But the old woman gets kind of upset. She’s scared that now Crichton is going to tell Grayza where the third probe is, which is kind of obnoxious since she’s the one who gave him the vision in the first place. I mean, what was the plan supposed to be, old woman? Have you been helped? Anyway, now she has to stop Crichton from spilling all the secrets to Grayza, so she takes him out to the beach and makes him jump in the ocean. “To have peace there must be sacrifice!” she says, and then she gives him a vision that forces him to jump off the cliff into the ocean.

Now, don’t let me throw cold water on the big cliffhanger or anything, but her plan at this point seems to be based on the idea that Crichton is going to go swimming less than an hour after eating. I mean, yeah, he jumps in the water, but now she thinks that automatically means he’s dead, which I don’t follow.

Next week: More fun things to do with hypnotic cleavage sweat.