My Week with The Muppet Show: Week Three, Day Four 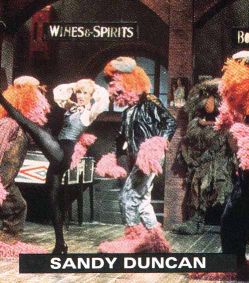 It’s all about the guest stars, really. I think that’s why being stuck in the middle of season one has been so wearying this week. As the story goes, nobody believed that The Muppet Show would be a success, so all the guest stars in the first season were doing personal favors for Jim Henson, or killing time till the bars opened, or working off their community service hours, or whatever. And the Muppets are so appreciative that they even have guest stars, that there starts to be this kind of numbing obsequiousness in each episode. We’re so honored to have Lena Horne here, we’re such big fans. Peter Ustinov is so great, he’s such a comic genius. Bruce Forsyth is so almost bearable.

All this flattery kind of takes the edge off things. In later seasons, they’ll get a lot of comedy out of humiliating Jaye P. Morgan, or exasperating Carol Burnett — but for now, the guest stars can only be seen in the most positive light possible.

So when Fozzie says that Sandy Duncan is “a star who does it all — she sings, she dances, she acts, and she makes you feel good all over,” I’m like, yeah right. Sandy Duncan, as far as I can recall, was a little pixie who wore tights and ate Wheat Thins. She has never made me feel good all over in my entire life, and I doubt she’s gonna start today.

Then Sandy’s first number is “A Nice Girl Like Me,” in which she plays a despondent drunk in a seedy bar, downing whiskey and flirting with a monster biker gang.

No, really, it is. And not only is it the second drunken bar fight scene this season, it’s also the most energetic and amazing production number they’ve done so far. Sandy hiccups and drinks her way through her first verse, then gets up to dance with the biker gang. She’s instantly terrific, growling and shaking her hips, obviously thrilled at the opportunity to tweak her nicey-nice Peter Pan image. She gets picked up and literally thrown about by the huge monsters, and she still manages to sing, dance, act and drink all at the same time. The monsters tear her skirt off — it says “YOW!” in my notes here — and, yeah, she’s wearing tights, that part was true, but the girl is working it. At one point she shakes her entire body and screams the lyric, then snaps instantly into a sarcastic demure pose, then goes into a Broadway kick step, then throws her leg onto one of the monster’s shoulders, does a back flip, and gets turned upside down and shaken by another monster for about five seconds, and she’s still singing the whole time.

The number ends with Sandy downing a row of eight drinks, sashaying to the middle of the stage, and turning in a circle, breathing at the crowd of monsters — who all fall down senseless as she turns to acknowledge the well-deserved cheers from the audience.

Now THAT, my friends — THAT is a guest star. I actually feel good all over.

My Week with The Muppet Show: Week Four, Day One