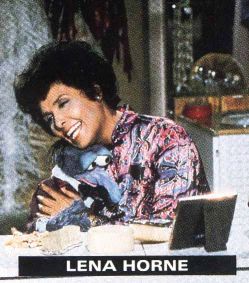 Sharp-eyed TP readers may have noticed that I haven’t done a My Week with the Muppet Show since approximately ever. Isn’t this always the way — you start out all excited and tell everybody that you’re going to watch every single episode of The Muppet Show in order and write about each one, and then lurking in there at the start of Week 3 is Lena Horne, and it just gets kind of disheartening. Doesn’t that happen to everybody? Help me out here.

I mean, I really wanted to watch all the episodes of The Muppet Show. It seemed like such a good idea. But I forgot that I was going to have to start with season 1, and the dirty little secret of Muppet fandom is that season 1 just isn’t really very good. It has its moments, of course, when everything works and it’s obvious why the show became a hit. But for every great episode, there’s a Lena Horne episode.

And it’s not like there’s anything particularly bad about the Lena Horne episode. It’s just so bland that I’m finding myself stalling with three paragraphs of introduction before I even start thinking about it. It actually occurred to me that maybe it would be kind of funny if I skipped writing about the episode altogether, and just rambled on like this for another few paragraphs to distract everybody from the fact that I don’t want to write about this episode. But it’s so early in the week to just fall on the ball like that. Thursday is Sandy Duncan, and I should probably save that trick till then.

The interesting thing, actually, is that Lena Horne is trying to avoid this just as much as I am. As is the custom in season 1, she doesn’t show up until minute six, and even then she’s studiously avoiding eye contact with Muppets.

Lena appears alone onstage, standing on what looks like an abandoned train platform. I think those are train tracks, although it’s hard to say whether it’s train tracks or just a road, and then there’s some boxes that look like luggage, and there’s a hand cart, and some trees. Yeah, I guess it’s an abandoned train platform, although why Lena and her dog are standing in the middle of the train tracks is beyond me. She sits down on one of the boxes, and the dog snuggles up to her, and she stares straight ahead, and she sings a song that does not make one damn bit of sense.

I’m serious. See what you can make of this.

Now, what the heck is that all about? “Like the croaking toad, I got a name, and I carry it with me like my daddy did?” It’s just word salad, set to vaguely inspiring music. Anyway, a bunch of Muppets pop up behind her for the chorus, and they join in for the highway bit. Lena doesn’t seem to notice they’re there. She just looks dead ahead for the whole verse, and then kind of looks down at the dog a little, then straight ahead again. She keeps this up for the whole song. There’s actually a moment where she fakes us out — she sort of cocks her head a bit and it looks like she’s about to look at the Muppets, but then she looks back towards the audience and stands up. It’s like she’s under strict instructions not to make eye contact with the puppets for any reason.

And the next sketch she appears in is a Muppet News Flash bit, where she appears on a little screen and just looks dead ahead at the audience again. What the hell does Lena Horne have against the Muppets, anyway? Who asked her to be on The Muppet Show, if she’s going to be all uppity about it?

Anyway, after the commercial break, she finally talks to a puppet for the first time, and now it’s like she’s making up for the first half, because she spends every scene in the second half sucking up to the Muppets. Kermit appears in a talk spot with Lena, and his first line is, “We’re so pleased to have you with us on the show tonight. You have long been one of our favorites,” which gives Lena the opportunity to say, “Oh, thank you, and I’m a big fan of you and the Muppets, Kermit.” Fozzie appears, indignant that he never gets to talk to the guest stars — so then Lena has to ask, “Hey, aren’t you Fozzie Bear, the great comedian?” She keeps buttering him up for the rest of the sketch. Apparently, someone gave Lena a stern talking-to during the commercial break about being nice to the Muppets.

But that scene isn’t enough to feed the great Muppet ego, no no. Next up, Gonzo tries to sing “Pop Goes the Weasel,” but Animal pops his balloon, and everyone boos. Dejected, Gonzo hightails it to Lena’s dressing room for a pep talk. “Sometimes it takes a long time for an artist to be appreciated,” she says. “But, listen — as long as one person appreciates you, you just gotta keep on trying! And as for me, I think you’re fantastic!” She sings him a song about how amazing and extraordinary he is, despite all available evidence to the contrary. At the end of the song, she hugs him and gushes, “You’re GREAT, Gonzo!”

There’s more. Next, Lena appears onstage, leaning on Rowlf’s piano. “Y’know, there’s a children’s TV show that I really enjoy,” she says. “Maybe you’ve heard of Sesame Street? Anyway, here’s one of my favorite songs from that show.” Okay, Lena, we get it — you really like the Muppets now. I think I liked it better when she was ignoring them.

At the end, Kermit thanks Lena for being the guest star. She pats his head and says, “Thank you, Kermit… it was fun.” Kermit nods and says, “Oh, good.” This is like the low self esteem episode; the Muppets need constant reassurance that they’re doing okay.

Everything’s fine, guys. Stop worrying about it so much. Next time we’ll get you a guest star that actually likes hanging out with you, and maybe then you can relax a little. Jeez.

My Week with The Muppet Show: Week One, Day One

My Week with The Muppet Show: Week One, Day Two

My Week with The Muppet Show: Week Two, Day Four